On Saturday, Oct. 24, as clouds gave way to a rainbow-filled sky, community members and local and state officials unveiled a long-planned statue of Jennie Dean. This statue is the centerpiece of the Manassas Industrial School/Jennie Dean Memorial Update at 9601 Wellington Road.

The Memorial pays tribute to Jennie Dean. Despite being born into slavery in 1848 and without the benefit of a formal education, she changed the lives of countless African Americans in Manassas, Prince William County, and the region when she established the Manassas Industrial School for Colored Youth in 1893.

During the socially-distanced ceremony for donors, Manassas Mayor Harry J. Parrish II, Lieutenant Governor Justin E. Fairfax, U.S. Senator Mark R. Warner, and U.S. Representative Jennifer Wexton all recognized the transformative power that the Manassas Industrial School had on its more than 5,000 students during a time when African Americans had few educational opportunities.

Manassas native and Philadelphia broadcast journalist Monique Braxton interviewed her father, Carroll Braxton, a Congressional Medal of Honor winner. The retired Montford Marine recalled his days as a student at The Manassas Industrial School in the 1940s.

Rev. Etoria V. Goggins, Pastor of the First AME Church of Manassas, and Dr. Keith Savage, Pastor of the First Baptist Church of Manassas, offered inspiring words and a historic perspective on the importance of African American churches like those that Jennie Dean helped to found. Aaliyah Critzer, a Jennie Dean Elementary School student, recited a poem written for the occasion. Dr. E. Faye Williams, President and CEO of The National Congress of Black Women, offered a perspective on the importance of honoring accomplished women of color.

The bronze statue was created by Bristow artist and Manassas Museum volunteer Christopher Hill. He faced a particular challenge in creating the statue because only one photo of Jennie Dean exists, and that photo is a head and shoulders image. He immersed himself in period research and the Jennie Dean story to create a more compelling work. 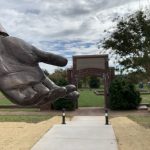 “Her left arm is outstretched, forming a clear line between the head, the heart, and the hand. These are the three parts of the body Jennie Dean had wished to strengthen through academic education, participation in faith services, and training in trade and industry,” Hill says. “Over time, I hope that people will take her hand and wear away its patina. When this hand begins to polish and shine, it will reflect the engagement Jennie Dean continues to inspire in the community.”

Next year, the hexagonal base will be adorned with six bronze reliefs of classroom scenes illustrating trades taught at the school.

Efforts to build a memorial to Jennie Dean began as early as 1984. The City of Manassas Historical Committee and the Manassas Museum acquired the 4.4 acres for the Memorial, then owned by Prince William County Schools, in 1992. The present Memorial opened in 1995, but the planned statue of Miss Jennie Dean was delayed until more funds could be raised.

More than 130 donors met the $175,000 goal for the two year-long project, which includes the plaza surrounding the statue. The Update was also funded by a Capital Improvement Project $350,000 appropriation. Fundraising continues for Phase Two of the Memorial Update, which includes connected walking paths, interpretive signage, and an amphitheater for community use.

About the Manassas Industrial School

After almost a decade of fundraising, the Manassas Industrial School for Colored Youth was chartered on Oct 7, 1893. With funds donated from the Manassas area and from philanthropists in Boston, New York, Baltimore, and Washington, D.C. that Jennie Dean personally lobbied, Dean purchased 100 acres and began construction on a school for the African American children of Northern Virginia. The school was designed as a private residential institution providing both academic and vocational training within a Christian setting. The first school building, Howland Hall, was completed in time for the dedication ceremonies led by Frederick Douglass on Sept. 3, 1894.

The school offset its operating expenses and allowed the students to earn their tuition and board through its industries. Excess products from these industries were sold to support the school’s needs. Despite these diligent efforts, expenses usually exceeded income and the school often suffered periods of debt, operating for 44 years under difficult economic, political, and social conditions. Despite these challenges, the school survived as a private institution even after Dean’s death in 1913 and up until the 1930s.

In 1937, the public-school systems of Fairfax, Fauquier, and Prince William counties formed a joint board of control and purchased the land and all the buildings from the Manassas Industrial School for a regional high school for African-American students. This three-county partnership remained until the 1950s, when Fairfax and Fauquier built their own segregated schools. In 1954, Prince William County consolidated its African-American students from Brown Elementary School of Manassas with the Regional High School and the school became known as the Regional High and Elementary School.