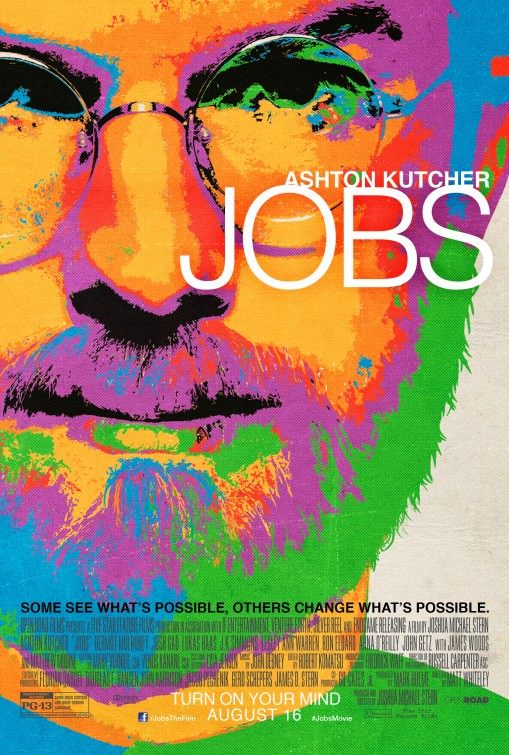 “Jobs” is a good thing for this country — and mankind. I went into this movie with some trepidation knowing this was a product of a rookie screenwriter (Matt Whiteley) and novice director (Joshua Michael Stern of Swing Vote). And I underestimated them, just like so many people underestimated Steve Jobs.

They take us back to 1974 to get to know Steve Jobs (Ashton Kutcher of No Strings Attached), the rebel with a wandering eye and no time for the conformity of society. I agreed with him when he said, “The system only produces another system.” He tries to break new ground working for Atari and needs help from his buddy Steve Wozniak (Josh Gad of Thanks for Sharing). One Steve is a nerd who loves computers and wants to be cool. The other Steve is cool and wants to make cool things. This bond, driven by the vision and tenacity of Jobs, is enough to get Apple off the ground.

I admit to being seduced by the soundtrack, as I was in college in the ‘70s and I still have the 8-track tapes to prove it. I applaud the filmmakers for this being their only indulgence into nostalgia.

If the movie has a fault, it’s that it has so much ground to cover. It starts in 1974 and takes us to 1996. If I had to tell you what happened to me last weekend, it would take three hours. We get peeks at the man behind the Mac, and it is not pretty. The filmmaker does not spend a lot time on his shortcomings or try to present some kind of simple explanation for why he is the way he is. Sure he was some kind of genius and mega-maniacal technology leader. But the movie does not put him on a pedestal. It shows him as a simple man. Yeah, that’s right – a simple man who had a vision and believed that anything was possible. He was not portrayed as Da Vinci, or an Einstein, but just a guy with a sparkle in his eye who would not give up on perfection.

I know it seems I am caught up in the man and not the movie. That is what a good movie does: it shows you the important stuff. I am sure they cut out a million things, but what was left worked for me. I felt his struggle and saw what he sacrificed for his principles, his visions and his dreams.

Kutcher gives a great performance and you sense there are explosions taking place in his mind. That’s not easy for a comedic actor to pull off. There is a bunch of other good talent in the movie as well, and we appreciate the characters’ challenge of being his friends and co-workers. In the end, he did not seem to have many friends, just people who were with him or against him.

I give this movie 4 stars out of 5. I was expecting a “Lifetime Movie,” but what I saw was a movie about an inspiring life. The story of Steve Jobs should be condensed to children’s books that we read to our kids at bedtime. Until then, you can see this movie.