“For it is in giving that we receive”
– St. Francis of Assisi

From philosophers to politicians, from saints to us average Joes, people have long celebrated the joy of giving. “When I do good, I feel good,” once said our 16th President, Abraham Lincoln. “I served and I saw that service is joy,” reads a quote widely attributed to Lebanese poet and artist Kahlil Gibran.

A little closer to home, fourth-grader Samantha Duke of Montclair also celebrates the joy of giving. Throughout the year her family saves all their spare change in large jars. When the red kettles and bell ringers of the Salvation Army come out in November, the Duke family goes out too—and donates the change.

Often, for fun, the Duke children get to ring the bell. Samantha will tell you, though, it’s not about that. “I feel happy when I’m putting the money in the jar at home,” she stated. “When the bell ringers give it to the people, [those people]can have enough money for a place to live or other things like that. That’s what I think about when I put the money in the jar. I feel happy and I feel excited for them.” Why save all year long for a seemingly small moment? “Helping people is important,” Samantha affirmed. “It makes me feel good inside and I know they need it.” 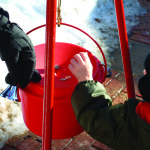 As it turns out, science backs up her statement. Studies show that donating time, talent, or money feels good. The 2010 Do Good Live Well Survey, released by United Healthcare and VolunteerMatch, reports those who volunteer feel physically healthier, have lower stress levels, and report more sense of meaning in their life. A 2008 study published in the journal Economica demonstrated that volunteering increases satisfaction with life.

Another 2008 study published in Science notes that financially contributing to causes promotes happiness. Yet, despite all the documented benefits, when speaking to volunteers in Prince William, it’s clear that altruism lies at the core of their service to others.

In the Business of Giving Back

“I know that if I give of my time, I can make a difference in my community, to the organizations I work with,” noted Kathy Strauss of ImageWerks in Lake Ridge. She often donates her photography talent to charities. “It’s just the right thing to do,” she said.

For Rebekah Wilbur, that drive to make a difference with her talent became personal. She operates a small bakery, Cakelicious, from her home in Montclair. “This year I am giving back by being a ‘sugar angel,’” Wilbur intriguingly declared. She explained that she volunteers through Icing Smiles, a nonprofit providing custom celebration cakes to families impacted by a child’s severe illness. Wilbur’s first assignment came in late October—to provide a birthday cake for a 3-year-old Woodbridge girl with a critical heart condition. That’s the same age as Wilbur’s own daughter.

“It was a truly amazing experience, albeit heart-wrenching at times,” Wilbur recounted. “I found myself contemplating what life would be like if my own family was affected by illness in this way and it was truly humbling.” Wilbur’s Disney-themed, heartshaped, multi-tiered creation was a hit. “[The girl] was thrilled with her cake…Her face when she saw it was priceless. I will definitely be doing this again,” Wilbur said.

One local company has made its desire to use its talents for the community betterment a pillar of its business model. “We love
our community. We love our work. This project brings them together,” reads the online homepage of The Imagine Better Project, a campaign led by Imagine, a Manassas-based marketing firm.

The company has a long history of supporting nonprofit organizations, each year donating a free website to a charity in need of a cyber-facelift, and providing nonprofits with a discounted rate for design and marketing services. According to Imagine President Rebecca Vaughan-King of Gainesville, the company also determines which projects to work with in part based on the good it does for the community. Imagine Better, launched this fall, formalizes this part of the company culture.

“It’s so important for businesses of all sizes to be involved with their community and with nonprofits,” Vaughan-King encouraged. “Money isn’t all a nonprofit needs. Contact a nonprofit that you are interested in serving and ask them what their needs are. They might need accounting services, silent auction donations, volunteers, legal advice—with budgets being so tight for nonprofits, their needs can be so widely varied.”

The Electric Palm, a waterfront restaurant in Woodbridge, also builds altruism into its business plan. Though the food industry is known for its thin profit margins, the restaurant hosts several charitable events each year, waiving fees for nonprofits and donating to the causes as well. “We believe it is vital to help better the community in which we live and work,” General Manager Tim Holland, who lives in Manassas, stated.

Recently, the restaurant hosted an event for CASA, Children’s Intervention Services and has also hosted events for local schools,
the American Cancer Society and many other causes. Each September 11, the eatery hosts a Patriot Day Remembrance complete with live bagpipe music and fireworks, honoring members of the armed services.

Holland noted that the support of staff and patrons helps make this level of giving possible.

“The staff and patrons at The Electric Palm are a special group. They both get very excited when we have an event,” he said. “The staff works extra hard to help make the events successful…Our friends and patrons of The Electric Palm and Prince William Marina really love contributing as well. It brings us all a lot closer together. It just makes you feel good.”

Groups That Make a Difference

Prince William is home to a number of organizations that exist solely to provide altruistic citizens with a way to make a difference. One such group, Rotary International, has 5 local chapters; Gainesville/Haymarket, Lake Ridge, Woodbridge, Manassas, and Bull Run. Rotarian Mark Worrilow of Dumfries, a member of the Woodbridge Rotary Club, summed up the club’s philosophy: “Service above self.” 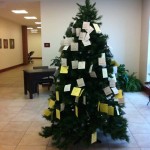 A Christmas tree at All Saints Catholic Church in Manassas is
decorated for the “Un-Trim A Tree” program; each tag contains a gift
idea for a child or senior in need.

In addition to helping others throughout the year, his Rotary club sponsors a dinner for the children served by the local Boys and Girls Clubs. “I have an ‘in’ with Santa and he comes to visit the kids,” Worrilow, who has played Santa for multiple charities, including this event, reported. Presents, of course, are provided. “They are all smiles and you can see they are happy,” he said.

Worrilow takes this sense of altruism to work, too. Each year his real-estate office, Crossroads Realtors in Dumfries, hosts an Angel Tree for the Salvation Army. These Christmas trees are decorated with tags listing the first name, gender and age for a child in need. Participants remove the tag, purchase appropriate gifts, such as clothing and toys, and turn them into their local Salvation Army office. A unique code on the tag identifies which child receives which gifts.

With several chapters in Prince William, Lions Club International, which bills itself as “the world’s largest service club organization,” is another group built on giving back to others. There’s even a few local “Alpha Leo” chapters for youth 12 and older, encouraging leadership development and community spirit.

Lions also invite others to get in on the act, encouraging the donation of gently-used prescription glasses by placing collection boxes at libraries, schools and businesses. Volunteers collect the glasses and send them to Lions Eyeglass Recycling Centers (the Eyeglass Recycling Center of Northern Virginia is one of 17 in the world). There, the glasses are cleaned, sorted by prescription and sent to people in developing countries.

“What does it hurt to give your time and talents, especially when it benefits others less fortunate?” said Worrilow. “Bottom line is, we should all be working to make the lives of those around us better.”

Prince William Living contributor and Woodbridge resident Audrey Harman’s family also participates in an Angel Tree program each year. She lovingly recalled her mother starting the tradition. “If you donate to something you can stand behind, then it shouldn’t be too hard to make it a tradition,” Harman said.

For Triangle resident Diane Mui, volunteering began as a teenager, at nursing homes, childcare centers and her church. Today, her teenage son keeps up the family tradition, volunteering through the Boy Scouts and church. “I love volunteering…It helps me feel like I’m contributing to the community. I also have had the opportunity to learn new skills and add to my resume,” Mui stated.

As a busy young mother, Mui provided an example to her children by volunteering in their schools. Now that her children are older, Mui volunteers one day a week at Birthright of Woodbridge, a pregnancy crisis center. “It is rewarding work, especially when mothers bring their babies by and you can see the love and joy in their faces,” Mui noted. “I hope I am able to volunteer for many more years ahead. I recommend volunteering in any way you can find the time to do so. In my opinion, it makes the world a better place.”

Woodbridge resident Kevin Williams would agree. “There are countless people and organizations who could use a little assistance during the holidays,” he said. “If you could find just a little time and share from the heart that which you are able, that would make a huge difference in the lives of someone, provide hope and lift the spirits of others during the holiday season.”

Haymarket resident and professional opera singer Angela Knight has formalized her giving, creating a not-for-profit organization,
Angela Knight Ministries (AKM). Each December the organization produces a show starring Knight; proceeds benefit local causes. This year’s show, Christmas in New York, will be held Dec. 5 at Hylton Performing Arts Center. Funds will go to the Wounded Warrior Project, which empowers injured veterans and their families. The group is also currently raising money to convert an historic Prince William-area barn into a familyfriendly theater. “God has blessed me to be a blessing. I feel a responsibility to share,” she explained.

Stacia Kelly, a holistic health coach and writer in Manassas, participates with her family in a Toys-for-Tots drive and provides meals to those in need during the holiday season. But their giving doesn’t end when the mistletoe comes down.

“It’s not a once-a-year thing, it’s an everyday part of our household culture,” Kelly emphasized. “My son is encouraged to be kind to others, whether that’s holding the door open for the person behind him, helping a friend pick up dropped books or heading out during the winter months to help deliver socks and food to the homeless.”

Kelly explained that she believes giving to others should “come from a place of love all year round.”

Emma Young is a freelance writer and stay-at-home mother residing in Dumfries. She can be reached at eyoung@princewilliamliving.com.