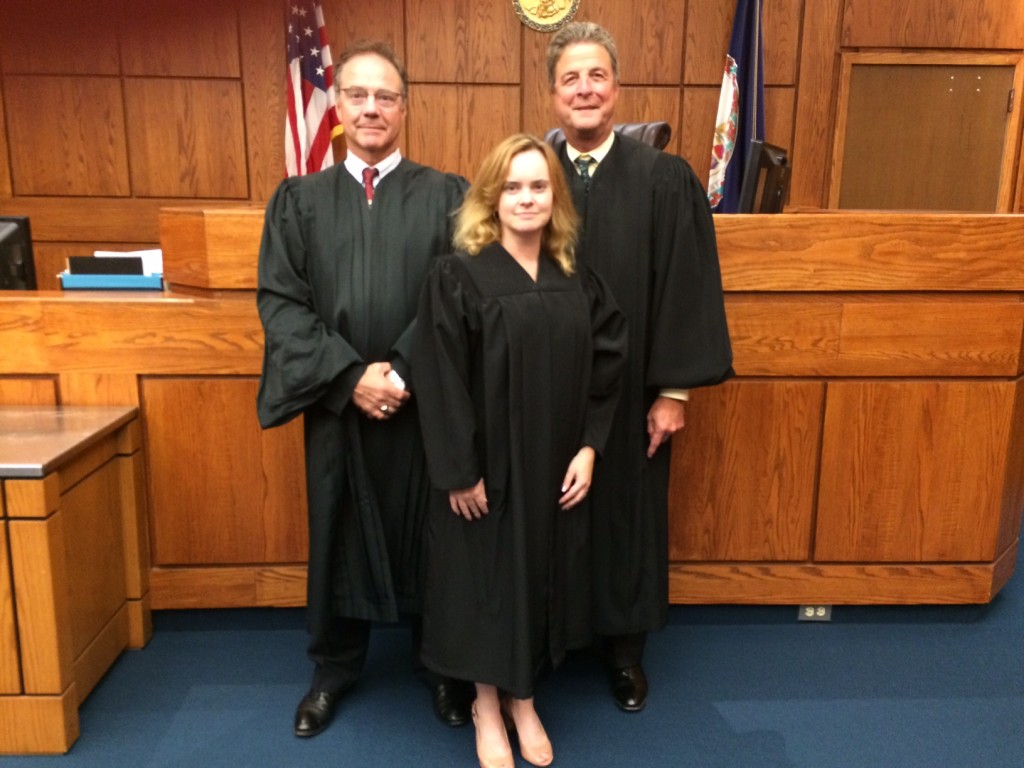 Dennis Carluzzo had the privilege of introducing both Judge Hudson and Judge Smith, having formerly been law partners with both. Dennis even remarked that the firm had come to be known as “the judges’ law firm,” its list of alumni to include Court of Appeals Judge Rossie Alston, Circuit Court Judge Lon Farris, and now two more Circuit Court Judges.

Dennis recognized Judge Hudson’s family, and recounted his educational and professional background, beaming with pride as he told a story where Tracy had more than held his own with some “big firm lawyers” in an acrimonious case, recalling thinking to himself “that’s MY law partner!” He spoke of Judge Hudson’s well known civility and decorum in the courtroom, both as a litigator and as a judge, calling Tracy “the lawyers’ lawyer,” and stating that “Tracy makes us all better.”

With that, Judge Hudson was sworn in to the Circuit Court Bench by Judge Alston, and then gave his remarks. He began by thanking the General Assembly for his appointment, the Bar Association for its support, his family, his former General District Court brethren, and the GDC staff for all of their support. He reflected on his time on the GDC bench, and his adjustment to all the new lingo. He remarked on the pace of GDC, how he took the job very seriously, and was sometimes challenged just to keep up. “Expediency is important, but patience is more so.” He gave tips to the attorneys present about their arguments, and concluded by saying that “all cases are important, all people deserve respect, and what we do matters.”

Dennis then introduced Judge Smith, beginning with his educational and professional achievements, and recognizing Judge Smith’s family. He also revealed why he stopped going to lunch with Steve: because he wanted to actually eat! Someone (or multiple people) would always approach Steve to talk to him, and neither he nor Steve would ever get to finish eating. He used that segue to discuss Judge Smith’s renowned ability to relate to people. Dennis told a story about Judge Smith, when he first began his career, asking his grandfather what type of law he should practice. His grandfather said general practice, because Judge Smith knew how to talk to anyone: the wealthy, the poor, and the disenfranchised.

Judge Smith was then sworn in to the Circuit Court Bench by Judge Alston as well. Judge Smith thanked his family, the GDC clerks, the Sheriff’s Department, and others, and relayed how this transition to the higher bench was bitter-sweet. Jude Smith pointed to the portrait of his father, Judge Selwyn Smith, that hangs in the ceremonial courtroom, and went on to say that a judge is more than just a person in a black robe. Once on the GDC bench, the pace and the seriousness take over; you have to make a decision and move on. He told of sage advice that his father, his “secret law clerk,” had given him when he was a judge: don’t overthink your decision – go with what’s in your heart.

He closed by remarking on the awesome trust and responsibility placed in judges, and the sense of duty they all share. “If we don’t do it, who will?”

John Irving introduced his wife, law partner, and the mother of his children, Judge Kimberly Irving. He called her a phenomenal trial attorney, a sentiment held throughout the bar, and said that her mother and father knew very early on that she was bound for a career in arguing. John beamed with pride about their four wonderful children, and noted the traits he has seen in Kim throughout their life together – logic, patience, humility – the bedrock principles of a good judge. Judge Irving was then sworn in to the Circuit Court Bench.

She thanked her family and friends, who travelled near and far, and spoke of how humbled she was to be given this great responsibility. She spoke of the weight of the power that has been placed in her, with control over people’s freedom, money, and children. She thanked her parents, the legislative delegation, and the Bar Association for its support. She spoke of the first time she ever walked into our courthouse, and how from then on Prince William County became her home. She noted what a remarkable bar we have, and how that collegiality and professionalism makes us different, making this a great place to live and work. She spoke of her beginning here, her as an Assistant Commonwealth’s Attorney to Mr. Ebert, when John as a county police officer, and how just a few years later John was graduating law school and joining her in the bar. She recognized Chris Feldmann, who walked into their office with a pony tail to ask for an unpaid internship, and is now a partner. She thanked the PWC Chapter of the Virginia Women Attorneys Association, which she was heavily involved with, even serving as its president. And finally, but most importantly, she thanked John and their children. She closed by promising to work hard to do the job correctly, and promised to always be prepared, to rule fairly, and to remember what it felt like to be on the other side of the bench.