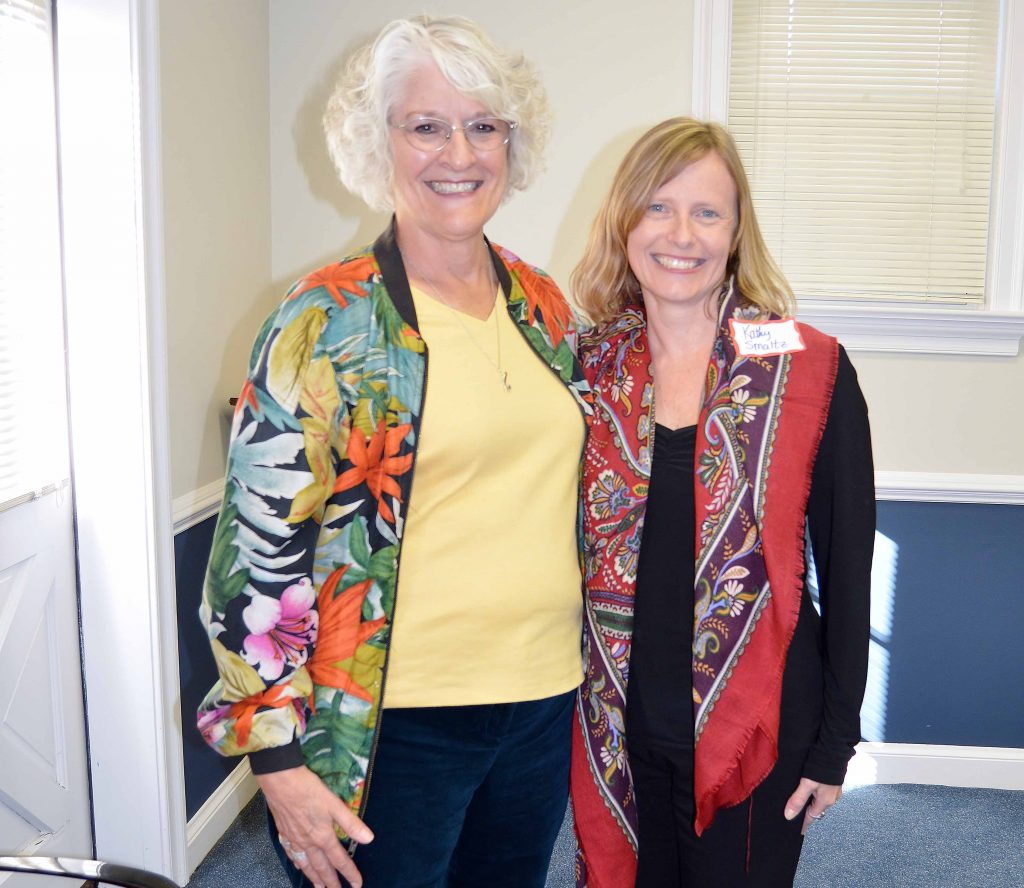 Kathy Smaltz looks the part of the petite, energetic suburban mom and beloved language arts and former gifted education teacher at The Nokesville School that she is, but when she walks up to the mic at Spilled Ink, a local writers’ event, she doesn’t read or recite her poems: She performs them. And her poems are not fluffy pieces about kittens and flowers.

She stands in the spotlight, one hip cocked, and fixes her listeners with a cold blue eye (and remember, this is all an act), as she begins reciting her poem, “Hate Poem,” which is based on a work by Julie Sheehan:

The tapping of my fingers hates you.

That black speck of pepper that gets caught in my teeth hates you.

Smaltz moves through a list of body parts and daily activities that focus her feelings about the former object of her affection.

Her writing wasn’t always like this. She became interested in poetry as a young child and recalled, “I had subscriptions to Wee Wisdom and to Highlights for Children, both of which published poems. When I was about nine, I entered and won a poetry contest with my poem about the wind.”

“And so, I realized early on that poetry is breath,” Smaltz said. “Poetry is life. The ancient Greek poet Homer asked the Muse to breathe life into him, resulting in The Odyssey.”

“There’s something about the lyricism of poetry that frees me in a way prose cannot,” she continued. “I believe that rhythm, that sensuality of language sidling up to beats and making music without actual notes, that’s what poetry is.”

She characterizes her current poetry as voice-based with occasional visceral images, naming the poems of Sharon Olds as an influence: “Her poetry taught me that you could say whatever you were thinking in a poem. She gave me the permission to capture on paper the images that aren’t always so, well, nice.”

Smaltz was named Prince William County’s Poet Laureate last June at the Poetry and Jazz Festival held at the Clearbrook Center of the Arts located at Tackett’s Mill Center. “When I was chosen, I was happier than I’d been in a long time,” she said. “I felt like a child who has just been told she’s going to Disney World. After I got the call, I’m pretty sure I jumped up and down and hugged myself.” And the focus of her work? “It’s to encourage others to find their voices. I’ve spoken to a number of local audiences and read my poems. I’d like to visit more school groups in Prince William County and perhaps find a way to connect with some local businesswomen, who’d also like to empower other females to reach their full potential,” Smaltz said. “There’s also a possibility the writers in our county will partner with Dr. Frederick Foote, a doctor and poet in Maryland working with veterans, to combine poetry and nature as a way of healing from their experiences with war.”

She cites local writer June Forte as an inspiration and support, and an outstanding advocate of creative work, as well as other friends who have been encouraging and helpful: John Dutton, creator and MC of Spilled Ink; Cathy Hailey, teacher of creative writing at Woodbridge High School; and local writers Garret Carlson, Sara Brooks and Stacy Shaw. Two weeks working with the Student Summer Institute, an offering of the Northern Virginia Writing Project, gave her the chance to write with her students, and her writing group members helped shape her work. Her family has also encouraged her to write and to attend events. “They’re very proud of me,” she said, “especially my youngest daughter, also a writer and a gifted visual artist as well.”

Smaltz noted that The Piedmont Journal of Poetry and Fiction featured several of her poems a year ago, centered around the theme of women’s voices being heard. She had another poem published years before in Kalliope about women being left behind after the Great War had ravaged an entire generation of men who—if lucky enough to come home—were then plagued by the flu. “I try to write about the strength women like these have that they don’t know about until they have to draw upon it,” she explained.

Smaltz thinks that the Poet Laureate program is off to a strong start: “The committee is a dedicated one, the Prince William County Arts Council is supportive and energetic, and people like Nancy Kyme and Bryanna Altman are staunch supporters of the arts. Plus, we have a strong grassroots writing community that is getting more involved and committed every year. I look forward to what I can do to help others while serving as Poet Laureate, but I can only do so much in two years and teach full-time and be a mother of four and write and have a life. The work I do will probably be more impactful as time goes on—when a new laureate has been named and I’m doing what I can in the background. I look forward to that.”

She believes that it’s an incredible honor to be recognized for doing something that she loves: “Most days, I write in a vacuum, and no one cares much that I do it. To be recognized for writing poetry? Well, no wonder I jumped up and down like a kid when I found out I’d been selected.”

“In my daily work as a teacher, I most value inspiring young people to write,” she continued. “When we write creatively in my classroom, when a student has just written a poem that didn’t exist moments before—when a young person finds a way to express what it means to be human by finding just the right words—that’s what I love about teaching. If I can be one of the first writers they meet and show them a little bit of the path that others showed me to become a part of a community of people who love the arts, then I have both received and given a most beautiful and meaningful gift.”

Finally, she said, “I will always write poems, whether I continue to publish or not.

“Poetry is a luxury. If you are starving and can’t pay the rent, you’re not sitting around and writing poetry about it. When I’m in the middle of my suffering, I am not usually walking around with a pen,” she continued. “But later, when God has seen me through yet another trial, I start writing. It’s how I process my pain. I don’t see life getting any easier although when it does, it’s good to be able to open up to another person’s suffering and be a witness to it.”

On the coffeehouse stage, Smaltz finishes her acidic poem.

The drum of my left inner ear thuds in time to the pulse of blood sent out by my aorta, the biological proof of how much I loathe you.

She nods once and then smiles as applause fills the room.

Dan Verner ([email protected]) is the author of several books (danverner.com) and was named “Best Writer in Prince William County (Virginia)” for 2014 and 2015 by readers in a “Best of Prince William” poll taken by Prince William Today.