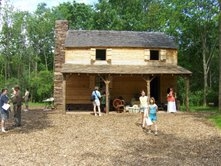 Kids who attend the county’s summer camps have the opportunity to learn about things ranging from the Civil War to dinosaurs, as well as science, technology, engineering and math.

Outdoor adventure camps, offered throughout the summer by the Parks and Recreation Department, will run Monday through Friday and will allow kids to participate in activities such as kayaking, canoeing and stand-up paddle boarding. Other camps will feature activities like soccer, basketball, juggling, dancing, karate, tennis, fishing, lacrosse and more.

Lisa Herr, the children’s program manager for the Parks and Recreation Department, said the full- and half-day summer camps are very popular among the 3- to 14-year-old set. “Our summer camps do tend to fill up; so, we do recommend that people register as soon as they know their schedules.”

To find out more about the summer camps being offered by the Parks and Recreation Department, the 2017 Summer Camps Guide is available online and includes schedules and pricing. Hard copies of the guide are available at any of the department’s facilities.

The County’s Historic Preservation Division will hold camps with a historic flavor throughout the summer. From July 18-22, the division will hold a basic Civil War camp at the Brentsville Historic Centre for 8 to 12 year olds that will offer hands-on activities and include enlistment, drill and tactics, uniforms and equipment, and flags and shelters used by Confederate and Union soldiers. “The Basic Civil War Camp includes … an orientation of the Civil War,” said Historic Site Manager, Bill Backus.

An advanced Civil War camp, Aug. 8 through 12, will offer 8- to 13-year-old participants the opportunity to speak with historic interpreters playing Civil War officers as they learn about campaign foods and how they were prepared and the uses of the cavalry. Drills will also be included in the agenda, Backus said. “They’ll be drilling with wooden guns, and at the end of the week, they’re split into two sections and they’re actually given a mock battle. They try to outmaneuver each other, so they have to pay attention during the week,” Backus said. The camp includes a tour of the Second Manassas battle sites at Manassas Battlefield Park.