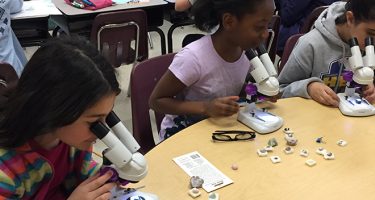 Student test results in English, math, history, and science earned fully accredited status for 85 of 90 (94%) eligible Prince William County Public Schools (PWCS), according to a September 13 report from the Virginia Department of Education (VDOE). By comparison, only 86% of schools across the commonwealth earned full accreditation. All PWCS high schools are fully accredited, and met the high school graduation requirement.

Five PWCS schools earned full accreditation status for 2017-18 based on Standards of Learning (SOL) test results for 2016-17, after being partially accredited last year. The report does not include Covington-Harper Elementary School, which as a new school received automatic conditional accreditation for the year.

“Students in all schools are demonstrating real progress in gaining the skills they need in English, math, history, and science,” said Superintendent Steve Walts. “We’re very proud of the progress toward full accreditation and committed to using the latest results to make even more improvements where they are needed the most.”

Freedom High School now is fully accredited after the pass rate in math rose from 67% to 76%. Rippon Middle School’s climb to full accreditation resulted from improvements in the English accreditation pass rate from 72% to 75%.

Five schools in PWCS are working toward full accreditation.

Fred Lynn Middle School’s status is listed as “to be determined,” as the school continues its work to improve test results. An important factor in that effort is the recent selection of a new principal. Hamish Brewer just moved to Fred Lynn from Occoquan Elementary, where he led staff and students to performance that gained recognition for Occoquan as a National Title I Distinguished School. PWCS is seeking to have Brewer’s proven track record considered in the accreditation status, as Fred Lynn Middle School continues its journey toward improvement. A final decision on Fred Lynn’s status will be made by the Virginia Board of Education in October.

“I have full confidence in the principals, the administration, faculty, and staff at all our schools,” Walts said. “We will be continuing to provide students with special assistance where they need it, and to work with VDOE and others to help every school and every student succeed. It’s great to have 94% of schools fully accredited, but we’re striving for 100%.”