It wasn’t until 1920–less than 100 years ago–that women in the United States finally gained the right to vote. As exciting as it was to be an American woman at this time, the fact remains that women didn’t have this basic right until more than 130 years after the country deemed itself the land of the free, home of the brave. Some of the bravest, actually, were the tirelessly determined, self-sacrificing suffragists of the 19th and early 20th centuries.

Amid this political shift in 1920, suffragist Carrie Chapman Catt formed a civic organization, the League of Women Voters (LWV). According to the national LWV website, Catt formed the league to “help 20 million women carry out their new responsibilities as voters.”

To this day, the LWV works at national, state and local levels to continue its original mission on behalf of all citizens–women and men alike. Of the more than 700 of these state and local organizations, the League of Women Voters of the Prince William Area (LWVPWA) is a small but mighty part of this
impressive ecosystem.

“Our main mission is to involve people with the government and keep as many people as possible knowledgeable of the issues that affect them,” LWVPWA vice president Barbara Amster said. “As an organization, we research and take informed stances on issues. We never support a party or a candidate. We are a lobbying organization and sometimes it is a Republican-backed issue that we support and sometimes it is for a Democrat-backed issue. We are just bright and informed, and we care.”

Voting: The Heart of American Citizenship
LWV chapters all over the country–including the one in Prince William–equip American men and women, on the left and the right politically, with everything needed to make their votes count in elections. Since registering to vote isn’t always as simple as it seems, the LWVPWA is always ready to help cut through the red tape.

“There are multiple opportunities for registering online these days, and those opportunities are on top of all the active voting registration drives held by various groups,” Amster said. “Registering citizens to vote is not always the main activity at our events, but voter registration and providing voters with information they need to cast the best votes for themselves and their families are the focal points.”

As it stands, voter turnout is never 100 percent, not even for the most recent Presidential election, according to figures reported by the United States Census Bureau. To combat this phenomenon, the LWVPWA members work on school campuses to register fresh-faced 18-year-olds to vote, and they
perform all the voter registrations at naturalization ceremonies so that newly-minted United States citizens start their journey with full access to the ballot.

“Voter registration has been, and will continue to be, a foundational activity for all members of the League of Women Voters,” Amster said. “We are unpaid, incorruptible, competent voter registrars, and it’s not unusual for us to register a few hundred people to vote after a naturalization ceremony. Just last
month, around ten of us were at the Hylton Center in Manassas, and we registered 450 brand new naturalized citizens to vote. An official from the local voter registration office is there, but we are the ones doing the grunt work happily, and without pay.” 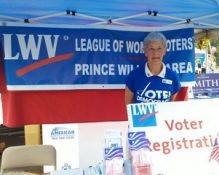 Partisan Blind Positions
The growing LWVPWA, which according to Amster currently consists of about 90 members, conducts exhaustive research on a variety of existing and potential legislation.

She explained that the League of Women Voters of Virginia–the umbrella organization for the LWVPWA–convenes every two years to develop action items and to determine the main issues that its research task forces will spend the next months, even years, studying. Last year, for example, the LWV of Virginia collectively decided to focus on public school funding in the state. Other recent areas of focus have included fracking and the opioid crisis.

“We have been studying Virginia’s vouchers extensively, and how they work with private schools, online schools, charter schools,” Amster said. “We at the LWVPWA are especially proud of that because we were the ones who pushed for it at the convention, and it immediately caught fire. We’ve interviewed our legislators and have conducted comprehensive, time-consuming studies. It’s an ongoing, evolving situation because we want to be able to adequately respond to taxes on public education.”

Only after a comprehensive study will the League take an official stance and offer up their findings to the public. “Each local league has a committee to conduct studies,” Amster explained. “Then, that committee presents educational programs to the entire membership. Once we’ve taken a position on an issue, we’ll often file amicus briefs for courts to consider. We have professional lobbyists that push for our League positions. We’ll also observe to ensure that our findings are relevant, so we go to plenty of local community or village board meetings as watchers.”

The LWV works in a number of ways to provide this critical information to both elected and appointed officials. The national organization influences public policy in federal, state and local government; it is commonplace for officials to use the information the LWV presents to better educate themselves on issues.

“Many government officials, elected officials and community groups respect us because of our nonpartisan stance,” Carol Noggle, long-time member and previous president of the LWVPWA, said. “We always conduct an extensive study of issues before taking a position.”

LWV lobbyists then leverage their expertise to make themselves heard at the highest levels of government.

“We ‘lobby’ or ‘advocate’ in several ways–in our local jurisdictions and at the state level,” Noggle, who is now a lobbyist for the LWV of Virginia, said. “We use our positions to support or oppose issues or legislation. When we know of a proposed bill of interest from a delegate or senator, we examine the details and determine whether we should support or oppose it. When we decide, we then write ‘talking points’ for our members to use when contacting a legislator to ask for support or opposition. We send ‘action alerts’ to our members statewide asking them to contact their legislators independently, not as
League members. We also do this at the local level in certain instances, such as when the Board of Supervisors proposes policies. My League job at the state level has been to interview legislators and make statements to committees in Richmond during the General Assembly sessions—serving as the ‘lobbyist.’”

In the decade since its inception, the Prince William Area League has realized tenable success.

“Transparency, or the lack of it, at the General Assembly has been a long time issue,” Noggle said, as an example of state League triumph. “It used to be that the votes of legislators in committees and subcommittees were not recorded. As a result, constituents wouldn’t know how their representatives voted unless they were present in the room. Transparency and open government are League principles. In Prince William County, we have for a long time been able to watch Board of County Supervisor meetings live on TV, and we have access to video archives of meetings. We have lobbied for bills to have Virginia’s General Assembly do the same. The League collaborated with other advocacy groups at the Capitol, and this year changes were made so that all votes were actually recorded electronically and
all committee meetings were live-streamed.”

On Stage and Behind the Scenes
The LWV has footing in public and personal spheres. For one, the LWVPWA is responsible for many of the pre-election forums and debates that introduce the community to political candidates.

“A big job that we do is sponsor and conduct candidates’ forums and debates,” Amster said. “The League is well enough respected that candidates have often agreed to debate as long as we are the sponsors. The League does these on national, state, and local levels, but it’s mostly local elections.”

Education is a priority for the LWV. The Prince William Area League will typically host, or have a presence at, multiple events every week–many education-driven.

“We try to conduct educational seminars at all the Prince William County libraries,” Amster said. “We’ll also hold sessions like these at mosques, cultural festivals and community days. We’re out there registering voters and providing public information about representatives and their platforms. We put together a booklet every year called ‘They Represent You’ (TRY), which is printed with information on everybody who has been elected to positions in Prince William County, from the library board
members to the governor. It contains email addresses, phone numbers and office addresses so that that people can contact the elected officials that represent them. I will walk around and hand them out at festivals, fairs and in carnival-type atmospheres. We ask everyone we encounter if they live in Prince William County, and if they do, then we give them a TRY booklet. I say, ‘If there’s something you don’t like, contact them about it.’ We’re just trying to be useful.”

The LWVPWA schedule is a seemingly endless bounty of activities, and the organization always welcomes new members with open arms. Just like American society, the organization has women and men of all ages, national origins and races–and there’s something there for everyone.

“We are the fire starters,” Amster said. “I joined in 1975 in Illinois, and I just went at the request of my neighbor. It was a gathering in someone’s house. I immediately got sucked in; I remember getting involved with a state-level handgun study. That’s what happens with people because the work we do is important and it’s so fulfilling. We pushed very hard in Illinois to ratify the Equal Rights Amendment and played a big part in its ratification. The League in Virginia did, too. So, there’s not only a sense of contributing to something amazing, but I’ve found it to be an incredible source of continuing education. The things I’ve learned about fracking and so much else going on in the world, you wouldn’t believe.”

Ashley Claire Simpson (asimpson@princewilliamliving.com) is a corporate communications professional by day, but her real passion is learning more about this community and the world by writing. She has been crafting features and human interest stories since her college newspaper days at the University of Virginia.