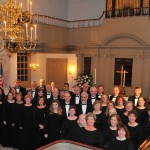 The power of their voices draws you in.  To then learn that their age range is as diverse as their vocal range is just part of what takes the Manassas Chorale to

the next level. The youngest member is 15 years old and the most mature member recently turned 80. Clearly the age gap doesn’t interfere with their ability to harmonize, produce beautiful music and sell out their new home, the Hylton Performing Arts Center.

What began as a 25-member singing group in 1995 has quadrupled in size under the musical directorship of Becky Verner, who has been with the chorale since 1997. Verner explains that many of the singers have backgrounds with their high school or college choirs and several sing in their church choirs. The members of the Chorale enjoy the opportunity to sing not only religious music, but also Broadway show tunes, classical and patriotic melodies and popular tunes which oﬀer a nice variety to keep the singers engaged. One recent concert featured a seventies theme with all of the musical selections correlated to that decade; Kermit the Frog even made a special appearance when they sang “Rainbow Connection.”

Another element that adds to their distinctive sound are the instrumentalists that help pull it all together during performances. At the holiday concerts, 17 orchestra members are brought in to accompany the Chorale. Their pianist, Jon Laird, is joined by a section of strings, woodwinds, brass, a harpist and percussionists.

The Manassas Chorale performs four major concerts per year–in March, May, October and December–which includes their “Concerts with a Cause.” During these special performances, both members of the chorale and audience members are asked to bring donations for pre-selected non-proﬁt and charitable organizations in the Prince William area. In addition, the group sings for churches, civic and community events and retirement homes. During a recent interview, Verner discussed how the Chorale performs annually at the Prince William Senior Center. “You’ve heard how you sing for your supper. Well, we go there and sing for our lunch,” Verner chuckled, adding that in gratitude for the vocal performance, the staﬀ at the Senior Center prepares a light lunch for the group. 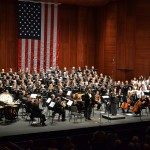 The Chorale is honored to perform at such events as the annual Candlelight Concert Series at Bruton Parish Episcopal Church in the heart of historic Williamsburg, Virginia. In 2009, the group was also invited to perform at Carnegie Hall, and in 2011 members traveled to Germany and France as part of a tour called “An American Salute,” where they sang to American military families stationed abroad. For the 10th anniversary of 9/11 the group was invited to New York City to be part of a mass choir for a concert at Lincoln Center. When it’s not feasible to take the entire Chorale to a performance due to space issues or other logistics, a 32-member ensemble ﬁlls in for the larger group.

Those interested in joining the Manassas Chorale can do so through an audition process held four times a year. Prospective singers must attend an open rehearsal and prepare a piece for the membership committee. The next chance to attend will be during the Spring segment beginning March 19th. According to Verner, about four out of ﬁve people that audition will become members. One recent new member, Barbara Johnston of Haymarket, shared her thoughts about seeing and hearing the group for the ﬁrst time: “Not knowing what to expect, I entered this large room with almost a hundred singers. I heard the wonderful sound and felt the energy of the group. I knew I had to become part of it.”

Another new member, Ken Duck of Gainesville, started as a loyal concert attendee. His aﬃnity for the performances led him to write the most glowing and praise-ﬁlled emails, Verner recalled. Once Duck retired, he was able to focus on his bucket list. He quickly auditioned and became a member of the chorale that he so greatly admires. He adds, “Each concert is the result of a lot of hard work done by many people and clearly is a labor of love by all involved.”

Verner expresses that each member of the chorale has an amazingly wonderful spirit, with a heart for their singing and for the community. She noted that while they give to the   community through their singing, that chorale members also receive.  These intangible gifts come from the skills they gain and improve upon and the camaraderie that is built  in the Chorale. In short, she is justiﬁably proud of the Chorale members and thoroughly enjoys being their director. The members aren’t the only ones that rave about the chorale. “We have attended for years and have been delighted with their professionalism and enthusiasm,” said longtime supporter Shirley Rice of Manassas. “Their repertoire is extensive and Becky Verner’s direction is superb. You can expend a lot more money and eﬀort going into D.C., but you won’t ﬁnd better entertainment than our local Manassas Chorale!”

Prince William Potomac District Supervisor Maureen Caddigan, and many of her family and friends, are also regular concertgoers. She boasts that she never misses a performance. “We love it and we also encourage others to attend!” Caddigan said. This and other statements of Manassas Chorale supporters are a testament to the perfectly executed performances that they deliver.  Even better, this all takes place in a state-of-the-art facility with reasonably priced tickets, making it an evening the entire family can enjoy together.

Visit www.manassaschorale.org to learn more about the group, concert schedules and auditions.

Lisa Collins-Haynes is married and the mother of one daughter. She is currently working as a Freelance Entertainment and Travel Writer and is a self-professed out-of-control travel spirit (O.C.T.S). She invites everyone to follow her travel blog at www.octsblogger.wordpress.com and can be reached at lhaynes@princewilliamliving.com.