Officer Jason Alicie of the Prince William County Police Crime Prevention Unit provided tips on staying safe. “If there is an expected knock on the door, don’t open it. Look out the window, but don’t unlock the door. And this is not just at ht,” said Alicie. “Even if you are at home, always keep your doors locked.”

If you have children who are “latchkey” kids, leaving or coming home when you’re not there, make sure they know emergency numbers and can reach you when needed, he said. “Use role play to teach children what to do in case of emergency.”

Also display a clearly-marked address on your house, he advised. Post house numbers outside in numeric format using contrasting color combinations. This makes it easier for rescue personnel to ﬁnd your home in case of an emergency, Alicie said.

Other advice from the officer includes the following tips on how to reduce the possibility of someone breaking into your home.

How to Prevent a Home Break-in 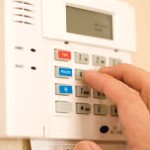 ■  Maintain your property. Make sure all structures, such as fences and barriers, are well maintained. This provides people looking in with a sense that there is ownership, and that the people living there care about what happens to their property. It also ensures that people cannot cut through breaks in the fence.

■  Keep landscaping low proﬁle. Keep shrubs less than three feet tall and remove all low-lying branches, so that would-be intruders are unable to easily hide in the bushes or trees.

■  Make sure all your property is well-lit.  Do not let bushes block exterior lights, and keep both the back and front of the home well lit. Motion lights are an option for those who do not want to keep a light on all night.

■  Use timers. Leave a light on and put interior lights on a timer when going out, so that it appears someone is in the house. Do the same thing with televisions and radios.

■  Have solid exterior doors. Check that exterior doors are solid-core doors made of wood or metal and include a 180-degree peephole. Doors should also have a one-inch deadbolt ﬁtted with three-inch screws in a strike plate. Any glass should be impact-resistant. For sliding doors in the house, use a “Charlie” bar for added security. You can also use screws in  the track to prevent the door from being pulled up and pushed out.

■  Lock garages. Lock the garage door when you’re not in the garage. Since attached garages provide access to the home, this door should meet the standards for exterior doors mentioned earlier.

■  Double lock windows. Have a secondary lock on all windows. Double check that they are locked before you go to bed. The police department does not recommend double-sided deadbolts for windows because they present a ﬁre safety hazard.

The Prince William County Police Crime Prevention Unit oversees and promotes the program “Operation ID” in collaboration with Manassas City Police. The program helps area residents mark their property to make it easy to identify if it is lost or stolen.

As part of the program, police advise area residents to engrave items of value that could be stolen, including computers, bicycles and cameras. For this purpose, the Prince William Crime Prevention Council has donated engraving machines, which are available for checkout at most Prince William public libraries.

Engraved items are easier to identify and return should they be stolen, Alicie said. “Our burglary guys routinely check the pawn stores for items that are stolen,” he said. “And pawn stores are required to provide a record to the police department of all goods pawned.”

Under the program, local residents are instructed to engrave their property with the letters “VA” and their Virginia driver’s license number. Members of the military are instructed to use their branch letters and service number.

Police encourage area residents to also make a list of their property with serial numbers, make and model, and to keep that list in a safe place, Alicie said.

The police department operates a number of initiatives during the year to assist people in identifying their belongings, he added. In April, Alicie and other officers were at the Walmart parking lot off Liberia Avenue in Manassas offering free Vehicle Identiﬁcation  Number  (VIN) etching,  which  involves etching a vehicle’s VIN onto its windows to reduce its value as a stolen vehicle.

Year-round, the crime prevention unit supports the more than 320 Neighborhood Watch programs operating in Prince William County by providing information, encouragement and training, according to Alicie. A unit officer trains members for about an hour on topics that include emergency preparedness and observing and reporting crime. The officer gives them phone numbers to call in cases of emergency, he said.

In Case of Fire 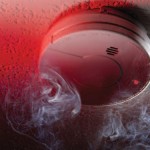 In case of a ﬁre in your home, dial 9-1-1 and then evacuate the premises, advised Jim McAllister, department chief at Occoquan-Woodbridge-Lorton Volunteer Fire Department.

“Leave the rescue up to the ﬁrst responders. I realize this is easier said than done. However, a resident outside the building can tell us upon arrival where [any trapped]victim is, thus allowing us to go directly to them,” McAllister said. “Secondly, re-entering the building will normally create an additional rescue for the ﬁrst responders, requiring additional time to search … and nobody to tell us where [trapped individuals]are located.”

“People grill too close to the side of the house or on the deck.”

of Fire and Rescue

The chief said every home should have a ﬁre-escape plan, which all family members review and practice often. “Creating a safe meeting location will give you a way to account for everyone and meet with arriving ﬁrst responders to provide us with crucial information,” said McAllister, who also recommended keeping a retractable ladder in homes with more than one story to aid in escape.

An Ounce of PreventionAn ounce of prevention is worth a pound of cure, as the saying goes. Robert Wall, public education coordinator for the Prince William County Department of Fire and Rescue, said that working smoke and carbon monoxide (CO) alarms are the key to surviving ﬁre and injury in the home.

McAllister concurred, saying that ﬁre alarms “should be installed on every level of your home with additional detectors in bedrooms. Hardwired detectors with battery back-up are preferred.” He said that the alarms should be tested monthly.

“Carbon monoxide detectors are easy to install, but a little harder to test,” McAllister said. “CO detectors should be placed a minimum of 10 feet away from a CO source and at least one per ﬂoor.”

The majority of ﬁres occur in the fall and winter months when people tend to use more candles and have the ﬁreplaces going. “People do not use steel containers when cleaning out wood ﬁres, and coals continue to smolder when put outside the house. When the ﬁre goes up the side of the house and into the eaves of the house, then it is a whole-house ﬁre,” said Wall.

This data is backed up by the Federal Emergency Management Agency (FEMA) report, “Topical Fire Report Series,” which shows that January has the highest residential building ﬁres resulting in injuries based on statistics for 2009 to 2011.

Wall added that cooking is the number-one cause of ﬁre in the home. During the summer months, grills are the most common culprit of house ﬁres. “People grill too close to the side of the house or on the deck, even though county ordinance prohibits people from cooking or grilling without a 15-feet clearance all around the grill,” said Wall.

Every summer the department kicks off a safety campaign  to remind residents of the county ﬁre codes as well as to provide tips on how to grill safely, Wall said. This summer’s safety campaign is the “Thrill of the Grill.”

Summertime also brings more water-related activity, and with that, the need for water safety. “Drowning is not as prevalent in Prince William as other areas. However, one drowning is one too many,” said McAllister. “Drownings can be prevented in many ways, usually unique to the particular situation.”

He explained that infants and young children should never be left alone in bathtubs or near bodies of water. Personal ﬂoatation devices should always be worn when in or near Prince William’s ponds, lakes, rivers and reservoirs. Home pools should have alarms that alert homeowners if the water is disturbed.

The Voice on the Phone

OPSC dispatchers are the “ﬁrst representatives of county government to assist citizens in need. Without leaving the communications center, they are usually the ﬁrst public safety persons to ‘arrive’ at the scene of a crime, ﬁre or medical emergency,” according to OSPC’s Web page on www.pwcgov.org.

“The center is staffed on a 24-hour basis with staff trained in dealing with medical and other emergencies,” said Alicie. According to the OPSC Web page, all call takers are equipped to provide emergency medical instructions, so that callers can begin care immediately.

Heeding the advice of area rescue professionals can help keep you and yours safer this summer. And if you do ﬁnd yourself in an emergency situation, you are in good hands in Prince William.

Testing CO detectors can be a little tricky, according to Department Chief of Occoquan-Woodbridge-Lorton Volunteer Fire Department Jim McAllister, who explained the process:

A graduate of American University’s School of Communication, Olivia Overman writes for a number of online and print publications. Overman can be reached by email at ooverman@princewilliamliving.com.