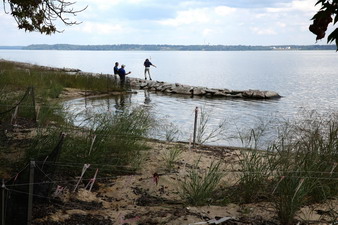 There are some changes happening to the shoreline at Leesylvania State Park. Since a living shoreline was created there about a year ago in order to halt erosion, new plantings have taken hold, wildlife have taken to it and things are looking good.

A living shoreline is created through a combination of planting native marsh vegetation along a shore and installing of a barrier of rocks just offshore. The piled rocks, each two to three feet in diameter, piled two to three feet high, serve as a breakwater. Both elements of the technique have been placed on 800 feet of shoreline along the Potomac River in Leesylvania State Park.

“It’s a hybrid technique where we create these sill structures and the sill structures will actually break the wave action,” Prince William County Environmental Engineer Tom Dombrowski said of the rock structure just off shore.

The rock barrier allows water to come at behind it at high tide. That water flowing through nourishes native grasses planted between the rocks and land to add additional buffering.

Before the living shoreline was installed, erosion had eaten far enough into the shore, during high tides that tree roots were exposed. Several trees had to be removed because they threatened the safety of park visitors.

“By doing this method of stabilization, we’re kind of restoring the shoreline to what it looked like pre-Colonial days. During those times, the majority of these shores had wetlands along the edges and fringes of it,” said Dombrowski. “Right now, based on what I see, so far so good.”

The project to protect the shoreline has already stopped the erosion that also threatened a stone path along the riverfront that traces a path used by the Native Americans before colonists arrived.

The living shoreline will have added benefits for the park as time passes. “By doing this, we’re creating habitat for the fish and habitat for the terrestrial critters like birds, amphibians and reptiles,” said Dombrowski. “This is going to be actually enhancing the entire environment with a new … ecosystem, a new food web. In time, it will establish. More plants will come in. We might plant some more trees along the buffer and it will become a holistic, functioning system.”

Those interested in fishing will be happy to know that fishing the outer edge of the rocks from a boat is allowed and will probably get better in time. “It’ll provide fish habitat in a big way. It’ll be perfect. We’ve already observed small minnows and small young fish hanging out in the pools. It’s a nursery for them, so it’s already started,” Dombrowski said.

The American Public Works Association recognized this project with its mid-Atlantic region 2017 Award for Environmental Sustainability.