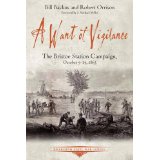 Local author Bill Backus will be presenting and signing copies of his newly released book, A Want of Vigilance: The Bristoe Station Campaign, October 9-19, 1863. The event is at 7:00 pm on Thursday, January 28th at the Old Manassas Courthouse (9248 Lee Street, Manassas, VA). For more information: http://tinyurl.com/jue68ae.

The months after Gettysburg had hardly been quiet—filled with skirmishes, cavalry clashes, and plenty of marching. Nonetheless, Union commander Maj. Gen. George Gordon Meade had yet to come to serious blows with his Confederate counterpart, Gen. Robert E. Lee. “Lee is undoubtedly bullying you,” one of Meade’s superiors goaded. Lee’s army—severely bloodied at Gettysburg—did not have quite the offensive capability it once possessed, yet Lee’s aggressive nature could not be quelled. He looked for the chance to strike out at Meade. In mid-October, 1863, both men shifted their armies into motion. Each surprised the other. Quickly, Meade found himself racing northward for safety along the Orange & Alexandria Railroad, with Lee charging up the rail line behind him. Last stop: Bristoe Station.

Authors Robert Orrison and Bill Backus have worked at the Bristoe Station battlefield, which is now surrounded by one of the fastest-growing parts of Virginia. In A Want of Vigilance, they trace the campaign from the armies’ camps around Orange and Culpeper northwest through the foothills of the Blue Ridge Mountains and along the vital railroad—to Centreville and back—in a back-and-forth game of cat and mouse: the “goggle-eyed snapping turtle” versus “the old gray fox” pitted against each other in one of the most overlooked periods of the war.

A native of Connecticut, Bill Backus graduated from the University of Mary Washington with a bachelor’s degree in Historic Preservation. PWL Currently working as a historian for multiple Civil War sites in Northern Virginia, Bill has worked for the National Park Service at Vicksburg National Military Park and Petersburg National Battlefield. Bill currently resides in historic Brentsville, Virginia, with his wife, Paige, and their dog, Barley.