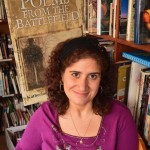 She looks so sweet, like a mom or a church lady. Don’t be fooled. Katherine Mercurio Gotthardt wields words with all the restraint of Gallagher’s wooden mallet.

“Shackling pregnant women is not only a human rights issue; it is a health issue,” she wrote to the state board of the Virginia Department of Corrections. “Therefore, I support regulations that limit the use of restraints on pregnant inmates.” With equal conviction, she advocates for less solitary conﬁnement of prisoners and restoring of civil rights to persons who have served their time for convictions of nonviolent felonies.

“I know Katherine and appreciate her passion for those in our community who are often voiceless,” said Kathy MacNevin Clark, chairperson of Unity in the Community, an organization made up of people of faith concerned about discrimination in Prince William, Manassas and Manassas Park. “Katherine is not afraid to speak up. One voice can make a diﬀerence.”

Her “Tenacious Poodle” blog is peppered with blunt social commentary protesting issues such as Prince William County’s original 2007–2008 immigration policy. Gotthardt had her own words thrown back at her in 2009, however, when Supervisor Wally Covington, R-Brentsville, nominated her to a volunteer position on the board of Discover Prince William & Manassas, the Convention and Visitors Bureau. His announcement released the hounds of local political bloggers. They copied her negative, inﬂammatory or provocative blog posts against the county, the supervisors and a former board appointee and emailed them to supervisors or read them from the podium during citizens’ time at board meetings. She received a barrage of phone calls and emails, and cut oﬀ comments to her blog.

The Board of County Supervisors rejected her appointment, 5 to 3, a publicly humiliating vote that FOX TV, WMAL, The Washington Examiner and other media covered.

“If you want to use your writing as an advocate, be prepared to get slammed,” Gotthardt stated, undeterred and sipping coﬀee at Simply Sweet on Main in Old Town Manassas. “I was a ‘fat chick,’ an ‘unhinged liberal’ and ‘the cheese had slipped oﬀ my cracker,’ which may be true by that time. How did I channel that? I wrote. I have a poem that goes, ‘You’ll never reach / the invisible me.’”

“She showed courage in the face of intense criticism, never wavering, never allowing bullying tactics to dissuade her from an important cause,” said Elena Schlossberg of Moonhowlings.net, a blog for civil debate in Prince William.

Gotthardt ignored her answering machine and unplugged from political blogs. “I started talking to and writing about women making a diﬀerence in the community, like midwives and entrepreneurs,” she said, turning in features to the News & Messenger and PW Business. “That calmed me down.”

Gotthardt’s writing also won her ﬁrst prize in a poetry competition of the Kentucky-based blog, “The Political Poet.” Her poem, “You Made Me Feel Illegal,” which appeals to anyone who has felt ostracized, starts:

In 2009 Gotthardt published “Poems from the Battleﬁeld,” a collection of Civil War poetry, photos and period quotes. The book proved so popular, a patron even bought the promotional poster that was hanging at Prospero’s Books in Old Town Manassas. In 2010 Gotthardt participated in “Journey Through Hallowed Ground” at the Manassas National Battleﬁeld Park, leading middle school students through an exercise based on “The Luncheon Ladies,” her poem describing spectators who came to picnic and watch the battle of First Manassas.

“While I read it, I handed [the students]each some straw, a piece of taﬀeta and a strawberry cookie so they could sense what it must have felt like to be there that day, wearing a fru fru dress, sitting in a ﬁeld, eating tarts and waiting for the war to start. … Only it didn’t go as [the ladies]expected,” she explained. “Then I asked them to write poems from the soldiers’ perspective, knowing that their mothers, wives or daughters were watching them. They handed back some powerfully emotional lines.”

At 43, Gotthardt also published her ﬁrst novel, “Approaching Felonias Park,” which explores predatory lending and homelessness, issues with which she is personally familiar. She was once a single mother without a home, accepting supplemental food aid. She became a victim of predatory student loans while attending a college that didn’t meet regulatory compliances. She quit a job at another college after discovering that, like the college she had attended, it was targeting disadvantaged populations and promising services that didn’t exist.

She donates book proﬁts, including those from her epic children’s poem, “Furbily-Furld Takes on the World” (illustrated by Selina Farmer-Williams), to charitable organizations, such as the food pantry at Bull Run Unitarian Universalist Church (BRUU) in Manassas and various historic preservation groups.

For six years she facilitated BRUU’s writers’ group, and helped edit the group’s anthology, “Eclectic Brew.” She currently serves on the board of the Prince William Arts Council, and administers websites for LeagueofWomenVotersPWA.org, WritersforaCause.org and WritebytheRails.org. Her poem, “My God Rides the Metro,” appears in “New Departures,” a Write by the Rails anthology.

Gotthardt openly shares her struggles with attention deﬁcit and post-traumatic stress disorder resulting from a 2005 rape and assault. She navigates recovery like a mental parkour, quickly confronting and negotiating obstacles without looking back. In this way, she was able to walk into the Prince William-Manassas Adult Detention Center to teach English for Speakers of Other Languages (ESOL) to drunk drivers, petty thieves and even sex oﬀenders, knowing that helping them gain life skills will help break the cycle of recidivism.

“Working in the jail empowered me in a positive way,” she said. “Others may misinterpret my advocacy as politics, but to me, it is human rights.”

In the meantime, Gotthardt has left a poetic message for her detractors:

Go ﬁnd yourself another chew toy.

For the rest of us, we see strength as well as deﬁance in her poems, such as “The Red Flagged House,” inspired by the Stone House at Manassas National Battleﬁeld Park. The poem ends:

You say you are here to protect us, we your women who don’t want war, we who try to heal hurts, scouring basins with our old lace, sucking up sweat with our linens, mending the last blankets we own, and asking, “Who will protect us from you?”

To hear a reading by this local writing powerhouse, look up “Gotthardt’s Poems from the Battleﬁeld” on YouTube.com. The author’s  website  is  www.katherinegotthardt.com.

Cindy Brookshire, a frequent contributor to Prince William Living, met Katherine Gotthardt in June 2009, when George Mason University’s Institute for Conﬂict Analysis and Resolution invited them to participate in the workshop, “Being Heard and Building Relationships in Prince William County, VA” at Point of View, in Mason Neck, Va. Point of View is a world-class retreat facility dedicated to fostering peace.