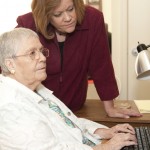 F. Sharon Swope and her daughter Genilee Swope worked on “Twist of Fate” for over a year. Photo by Aleda Powell

A few years ago, local 82-year-old mom F. Sharon Swope (now 85), who—inspired by her youngest daughter author Allyn Stotz , (now a published children’s book author)—decided if she was ever going to put in writing the stories that have been running through her head all her life, she needed to start.  She and her second daughter, Genilee Swope Parente, a freelance writer/editor met once a week for more than a year at a local Applebees to fine-tune the plot; even acknowledging the servers in their book. “Thanks for listening to many conversations between us on how to kill off our characters”

“Twist of Fate,” by Genilee Swope Parente and F. Sharon Swope. The book is the first in the Sam Osborne mystery series set to be released over the next two years.

“Twist of Fate” chronicles the love story between Casey Lewis, a twenty-year-old wheelchair bound woman who is the target of an assassin and Danny Jones, a young homeless man who wanders into her life and helps her survive a brutal snow storm and several murder attempts. Over time, their feelings for one another grow deeper, something both are surprised to find happening. Private Detective Sam Osborne, who is hired by Lewis, tries to figure out who wants Lewis dead before they are successful in their attempt on her life and cut her romance with Jones short.

“This piece is a work of devotion,” said Eric Staggs, Chief Executive Officer for Spectacle Publishing Media Group LLC. “The Mother / Daughter team of Sharon and Genilee have transformed a tangential plot line into a full-powered drama fueled by the human emotions we all understand.”

“Their devotion to the project was not only inspiring as a writer, but refreshing and fulfilling as publisher,” Staggs said.

F. Sharon Swope lives in Woodbridge, and her daughter Genilee Swope Parente lives in Dumfries, VA. They held their first book signing on December 17th at Victoria Park in Woodbridge.   “Twist of Fate” is now available on Amazon and Barnes & Noble in print and as an eBook. To learn more about Genilee Swope Parente and F. Sharon Swope, follow their blog and Twitter pages.

Publisher and lifelong PWC resident Rebecca Barnes, when not busy bringing you Prince William Living, acts as Public Information Officer for OWL VFD.  She and her family live in Manassas.  You can reach her at rbarnes@princewilliamliving.com