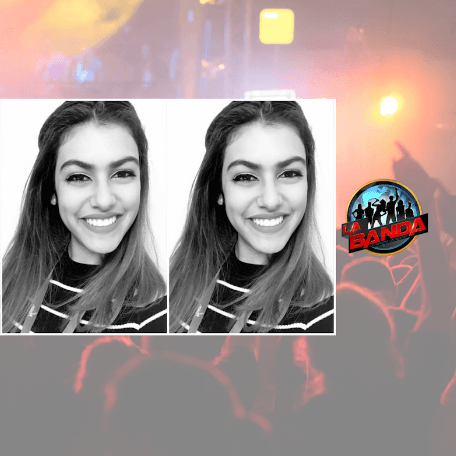 Reymundi got the opportunity of a lifetime to be on the television show because she won Verizon’s national contest for aspiring singers called “Your Best Audition.” Using the Univision Conecta app, people from around the country uploaded short audition videos of themselves singing the song from last year’s “La Banda” winner. Reymundi won the most social media votes for her video and thus won the opportunity to perform in Miami for the popular Spanish-language show.

“Because the singer with the most votes would win and I really wanted to win, I worked hard to use social media and technology to reach out to people and gain votes,” said Reymundi. “I even went to Walmart with my mom, handing out little cards asking people to vote for me. I love how we can post videos of us singing online and use the platforms for sharing our talents with others.” Reymundi doubled the number of Instagram and social media followers she had since before the contest.

Once Reymundi found out she won, she flew down to Miami for two days of rehearsal before the live televised performance. She had the chance to sing one minute of a song from the band that won last year, and the live broadcast meant any mistakes would be picked up immediately by the camera, which Reymundi found a bit nerve-wracking at first. “It was a lot of adrenaline,” she said. “I am so thankful Verizon’s ‘Your Best Audition’ contest provided a vocal coach and choreographer. With only two days of rehearsal to learn a new song to sing and dance to, it was intense, but rewarding.”

It didn’t help that Reymundi, a freshman at George Mason University, had a 20-page anthropology paper due at the same time. “Instead of sleeping or enjoying the hotel pool at the few free moments, I was in my room typing up my research paper for class, so it was a bit stressful juggling it all.”

Reymundi also had to adapt quickly to the song, as it was originally a song for a male vocalist, so she had to find ways to sing it in her range. The vocal coach helped her prepare for that. “Everyone was so kind, it wasn’t uncomfortable at all. It was such a wonderful experience and I am so thankful for Verizon giving that chance of a lifetime,” she said.

Reymundi encourages Prince William County youth who have dreams to never give up and to realize your dreams won’t happen if you just sit around waiting for them to happen. “You have to give it your best every single time, don’t doubt yourself and work really hard,” she enthused. “People say I wish for this or that, but you can’t just wait for it, you have to work hard for it.”

Her father is in the Army and while her family is originally from Puerto Rico, she felt comfortable in Miami for the live show because she lived there for six years during one of her family’s military moves. She lived in Woodbridge for seven years before moving to Miami, and when her father was reassigned to Woodbridge more recently, she was happy to come back to the area for college to pursue her communications degree.

Reymundi has no formal training, no singing or musical instrument lessons, which is amazing to think about especially after hearing her beautiful voice. She did theater in high school but always had a passion for singing even as a child. But she isn’t studying music in college because “in case music doesn’t work out, I want a good backup for my future,” she said.

When asked when she knew she wanted to be a singer and performer, Reymundi said, “This may sound funny, but probably at a Justin Bieber concert when I was younger. I wasn’t amazed by him necessarily, but by the crowd of people singing together. The crowd had such a positive energy and to see a performer bring people together as one was amazing. I knew I wanted to do that. Performing is a great, healthy way to inspire people and reach out to people in such a positive way.”

So what’s in Reymundi’s future now? While she completes her college degree at George Mason, she hopes to enter more singing competitions and keep pursuing her dream of singing, so keep an eye out for her online and on television!

Helena Tavares Kennedy (hkennedy@princewilliamliving.com), a longtime Prince William County resident, is a freelance writer and communications consultant and big-time believer in following your dreams. She can also be reached at htkmarketingservices.com or livinggreendaybyday.com.