The more things change in America, the more they stay the same. One such timeless practice is the United States Census. More than 200 years ago, Article One of the United States Constitution was written to specify that the federal government must count the national population at least once every ten years. And the execution of a regular census has continued without interruption to this day.

Why We Have a Census

Although it may seem like a simple concept, the act of counting and gathering basic data about everyone in America is incredibly important. For one, the government can only effectively distribute federal funding – more than $675 billion – when decision-makers know certain statistics about the people they represent. Then with regard to those decision makers, the number of legislators that a state elects to the House of Representatives depends on how many people live in said state.

“The decennial census is crucial for fair representation, for states, cities and communities to get money, and, the data is public to be used by anyone,” Richard Pineda, Co-Chair of the Northern Virginia Complete Count Committee, said. The Committee was established last year to spread region-wide awareness of the nationwide census. “The 2020 Census directly impacts how much money the Commonwealth of Virginia will receive over the next decade. It is predicted that Virginia will receive $17.7 billion of funds from 55 large federal spending programs for resources such as schools, hospitals, and infrastructure. [An undercount] would mean Virginia losing millions of dollars in critical resources for local communities.”

Pineda specified that for every resident counted, the state of Virginia will earn $1,200 every year between 2020 and 2030 ($12,000 collectively). So, it is easy to understand why the work of the Northern Virginia Complete Count Committee (NVCCC) is so important.

The Northern Virginia Complete Count Committee (NVCCC) was established in August 2018 by the Community Foundation for Northern Virginia (CFNOVA) – a non-profit organization that contributes to local philanthropic groups and initiatives that fuel innovation. Specifically, CFNOVA designed the NVCCC to oversee, and ensure the success of, CFNOVA’s official Count the Region initiative.

“Simply put, the goal of the Count the Region initiative is to get people to take the Census,” Tara Nadel, CFNOVA’s Vice President of Marketing and Communications, said. “The Census Bureau has fewer resources than they did leading up to the 2010 Census, so their strategy this year is seeking community partners. It was obvious to CFNOVA’s Board that this is very important work, and we are in a unique position to hold this initiative because of our social capital in the area.”

While each jurisdiction has always had its own committee dedicated to “getting out the count” in its designated area, this census cycle marks the first time that the Community Foundation is promoting census participation to Northern Virginia as a single entity.

“Guided by the U.S. Census Bureau, the NVCCC will mobilize action and engage members of our community in the 2020 Census to help support as complete count of our region’s population as possible,” Pineda said. “We have invited key civic, government, social and private sector leaders from around the region to join, leveraging the Community Foundation’s local connections, relationships and influence.”

The Count the Region Initiative 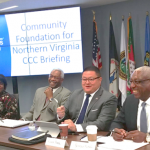 Prince William County and its number of hard-to-count regions – young children, senior citizens, immigrants to the region, for instance. It’s really important that everyone is counted because 55 programs in the area utilize federal funding – highway construction, foster care, public school grants, and more.”

Census surveys take less than an hour to complete, and responses are completely confidential. This is also the first year that American residents will be taking the Census online. In essence, it takes just a short amount of time and a few keystrokes to make a significant contribution to your community.

“In March 2020, a postcard will be sent to every residence in the United States, and on the postcard will be a PIN number specific to that residence. On Census Day, April 1, 2020, you will go online and enter that PIN to fill out the decennial census. All that data goes into an aggregate system so no one receives your specific data, and the information you provide to the government are important statistics.”

The 2020 Census will be America’s 24th official count of everyone in the country, and it is vital for everyone in this growing nation to complete it – regardless of your gender, race, marital, or citizenship status. No matter who you are, you have nothing to lose – and much to gain – by simply (and anonymously) providing some key information about yourself and your family to the government.