Manassas local John Hartt went professional with his painting about three years ago. Since then he has held
four solo shows, sold many pieces and brought smiles to art lovers in the region.

“I’m a graphic designer as a profession, but I’ve always painted,” Hartt said. “About three years ago, there was this place in Old Town Manassas called ArtBeat. It was a co-op for artists. I’ve always painted kind of weird, not your typical landscapes. I saw this one artist that had weird stuff in the store. This was my
epiphany. I said, ‘I can paint weird stuff.’”

ArtBeat closed only two months after Hartt began selling paintings there. He transitioned from the co-op in Manassas to the Arches Gallery at the Workhouse Arts Center in Lorton. He describes Arches as “kind of like a co-op for artists who work off campus. We bring works in every month, like three new pieces every month. It was a really good lesson in productivity and meeting goals.”

Hartt is currently on a leave of absence from the Workhouse Arts Center because he has a very full plate with two solo shows this year.

His second show runs from September 6 through November 2, 2019, at the Center for the Arts of Greater Manassas/Prince William County at the Candy Factory. He is creating 24 new paintings for this show.

Hartt’s work is on permanent display at the Old Town Man Cave, a barber shop in Manassas.

Hartt draws his inspiration for his whimsical pieces from his daily life. “I’m just a visual guy,” he said. “I like to look at everything. A lot of it is out of my head. I see what other artists are doing and I make that into my own. If someone says something goofy, I say I can paint that, and that will be my project for the day.”

One of his favorite pieces is titled “Balloon Boy.” Hartt loves this piece so much that he had a tattoo artist put the image on his arm.

Hartt creates many of his paintings with oil. “I like it because it’s buttery, and you can work it for a few days. I like the blending techniques,” he said. “I just want my art to make people smile,” Hartt said.

To budding artists out there, Hartt advises “put some paint on a canvas and put it out there. I’ve always painted and thought ‘this isn’t as good as I’d like it to be.’ I was looking back at the things I was doing 20 years ago, and I don’t think [they are]any worse than what I’m painting right now. It doesn’t matter how
good or bad you are—just paint and put it out there, and then you realize, hey, I have a voice. When artists put their stuff out there, it’s their voice, and they need to be heard.”

You can find more information about Hartt online at jortt.com.

Amy Taylor (Ataylor@princewilliamliving.com) is a freelance writer and editor. She earned her BLS in English from the University of Mary Washington in Fredericksburg, Virginia. 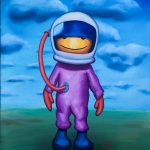 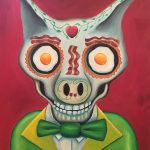 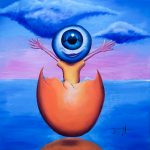