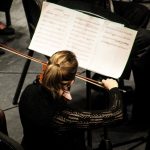 Manassas Chorale is celebrating its anniversary by holding a series of landmark performances.

Manassas Chorale started a quarter of a century ago as a group of 25 voices joining to bring greater appreciation and enjoyment of quality music to Manassas. Those voices now number 100: Over the last 25 years, the Chorale has quadrupled in size. They’ve also moved from performing just locally to performing for audiences across the world.

The group has also become the official choral group in residence at Hylton Performing Arts Center, located on the Prince William campus of George Mason University. When the Hylton Center opened in 2010, they were the first resident arts partner to hold a sold-out concert.

Manassas Chorale has performed in the community at churches, assisted living facilities and civic groups. They enjoy giving back to their community by performing at benefit concerts and for luncheons and dinners as they are invited.

“They have also performed Candlelight Concerts in Colonial Williamsburg for 17 years, at the Museum of the Marine Corps in Triangle and at Carnegie Hall and Lincoln Center in New York City,” said Becky Verner, Director of Manassas Chorale. “Members of the Chorale have also sung in England, Ireland, Wales, France and Germany as part of ‘Perform International’ tours and at Washington National Cathedral.”

One of their favorite performances was a meal for cancer survivors in Gainesville, Verner said.

When putting together a performance, Verner listens to over 200 pieces. From those, she selects 15 or 16 pieces for each concert. She said they’re all her favorites.

“This year, we’ve done popular music for our ‘Silver Serenade’ concert and wonderful carols and seasonal songs for our ‘Silver Noel’ concert. The spirituals we’ll sing in March are vibrant and rhythmically fun to sing, and the patriotic repertoire for our May concert allows us to express our gratitude at being American and pay tribute to our armed forces and our veterans,” Verner said.

The Chorale plans to celebrate with a luncheon the weekend of their final anniversary concert. Current and former members will gather together to celebrate this milestone anniversary.

“Our Chorale singers are a wonderful group of people who love to sing, to be friends with each other and to share their gift of music with our community and around the world,” said Verner. “We have an outstanding accompanist, Kristina Schenck; an experienced, creative director [Becky Verner]; talented orchestra members who accompany our concerts; a beautiful venue—the Hylton Performing Arts Center, right here in Manassas—and appreciative audiences.” We hope the next 25 years see us reaching even greater heights!

Manassas Chorale is celebrating its anniversary by holding a series of landmark performances. Verner described some of them.

“Silver Voices: Voices United” will be held on March 23, 2019 at 7:30 p.m. in Merchant Hall at Hylton Performing Arts Center. The Voices United concert features selections by the 95-voice Manassas Chorale as well as the 150-voice Voices United Workshop Choir. The Chorale, directed by Verner, will share a
variety of sacred selections, including hymn arrangements and rousing spirituals by several American composers. The Voices United Workshop Choir will be directed by Dr. Rollo Dilworth, clinician, from Temple University. Dr. Dilworth has over 100 published compositions and arrangements, and both groups will be sharing his pieces. “The grand finale will feature 180 singers with instrumental accompaniment,” Verner said.

Verner also said, “Members of the Chorale will sing at a Benefit Concert in The Plains that’s planned for October 25 and the full group will sing the Candlelight Concert at Bruton Parish Church in Williamsburg on December 12 at 8 p.m. Both of these will be open to the public—the first one is ticketed and the second is free with a freewill offering.”

What’s more, the group will venture across the pond to perform at Winchester Cathedral in England on June 7, 2019. And they will travel to perform in New York City at Carnegie Hall on December 2, 2019.