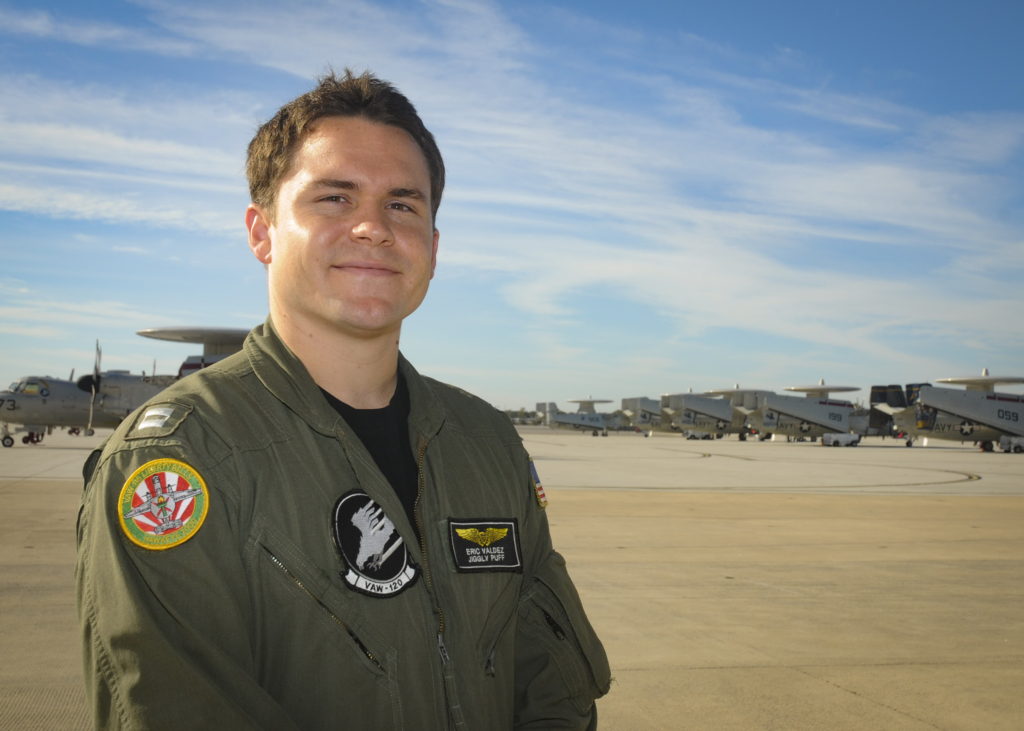 He is responsible for the instructing naval flight officers to ensure that are fully capable to complete their missions once they join the fleet.

“I enjoy seeing the growth in the students,” said Valdez. “It is very rewarding to see them grow before they go out to the fleet and become naval aviators.”

VAW 120’s primary mission is to fly and train naval aviators, naval flight officers, and naval aircrewmen to safely and effectively operate E-2 and C-2 aircraft, preparing them to join the fleet.

The training also includes the newest variant of the E-2D aircraft platform, the Advanced Hawkeye, which serves as the most advanced surveillance aircraft in the Navy.  It features a state of the art radar with more capability and upgraded aircraft systems that will improve supportability and increase readiness.

“The Greyhawks of VAW-120 work diligently to accomplish the mission of the sole Fleet Replacement Squadron for the E-2 and C-2 communities,” said Cmdr. Evan Morrison, Commanding Officer VAW 120. “It is an honor to see the quality of production set forth by my sailors, and to witness the development of the Navy’s future Airborne Early Warning and Logistics leaders.”

With a crew of over 100 sailors, jobs are highly specialized and keep each part of the Hawkeye running smoothly, according to Navy officials. The jobs range from training the new aviators, maintaining airframes and engines, processing paperwork, as well as handling and flying the aircraft.

“Since the command is so large, it allows interaction with a variety of people, from meeting new people to reconnecting with old friends,” said Valdez. “It helps create a stronger camaraderie within the aviation community.”

While on deployment, challenging living conditions build strong fellowship among the crew, Navy officials explained. The crew is highly motivated, and quickly adapt to changing conditions. It is a busy life of specialized work, watches, and drills.

“Serving in the Navy has given me the opportunity to serve my country and see the world while being able to fly and do something I enjoy,” said Valdez.