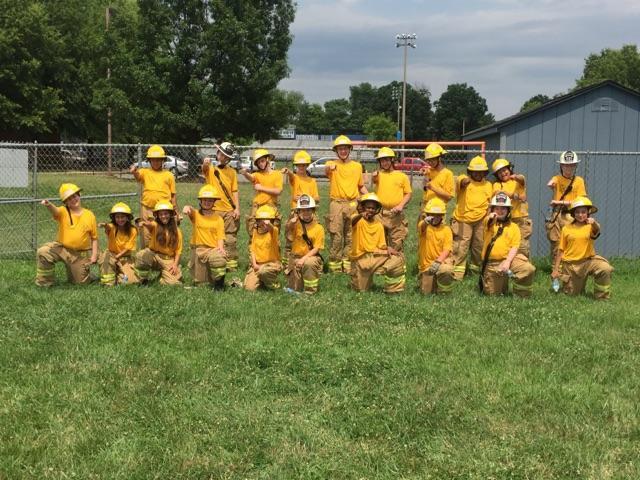 Participants in a City of Manassas summer camp

Over the last four years, the middle of July means Fire & Rescue and Police Summer Camps in the City of Manassas. For incoming freshman to Osbourn High School, these camps promote confidence, community and so much more.
The Manassas City Police Camp is a two-week camp where students get hands-on experience finger printing, using a radio, using the simulator at the EVOC, learning defensive tactics, and they get some great information on the dangers of illegal substances.  The teens also get a visit from the FairfaxOne helicopter and learn about SWAT and traffic stops.  This not only teaches the campers about how the department runs, but also, how to interact with officers and builds community among the campers and police officers.
The City of Manassas Fire & Rescue Department holds a two-week incoming freshman camp and one one-week rising sophomore camp.  The freshman camp offers hands-on experience learning what it takes to be a firefighter.  Campers learn to suit up in under a minute, communicate on the radio, ride in a fire truck, use a fire hose to put out mock fires and other basic firefighting skills.  On the emergency services side, students learn CPR, basic first aid, and explore a medevac helicopter.
During the Fire & Rescue sophomore camp, being held July 25-29, students will take their skills to the next level, carrying a hose through a burn house, experiencing an airplane crash simulation and using firefighting tools to take apart a car, as firefighters do to extricate victims of car accidents.
East to West Embroidery provides all camp shirts at no charge to the City or the campers. These camps are an opportunity for high school students to explore possible career choices as they begin their high school journey.
Share. Twitter Facebook Google+ Pinterest LinkedIn Tumblr Email
Previous ArticleRegional Chambers Announce Northern Virginia Chairs and Mayors Economic Forum
Next Article Home Dedication Will Mark Habitat for Humanity Prince William County’s 16th Home Ownership Project