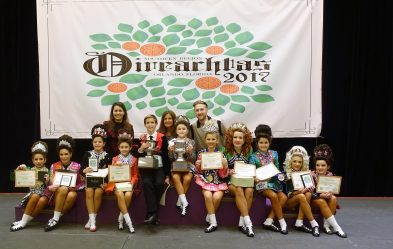 Younger winners from the McGrath School

Dancers from the McGrath Academy of Irish Dance won two first place awards – girls under age 9 and boys under age 12 – at the Irish Dance Teachers Association of North America (IDTANA) Southern Region Oireachtas that were held in Orlando the first week of December.

The Oireachtas (pronounced O-rock-tus) is a regional championship where Irish dancers compete to qualify for national and world championships. The southern region, of which McGrath Academy of Irish Dance is a member, includes Alabama, Arkansas, the District of Columbia, Florida, Georgia, Louisiana, Maryland, Mississippi, North Carolina, Oklahoma, South Carolina, Tennessee, Texas, Virginia, West Virginia and Mexico. Nearly 2,000 dancers from the southern region competed at the Hilton Orland Bonnet Creek. Of 26 McGrath dancers who competed, 21 recalled, and 18 qualified to compete at the national level and nine qualified for the world competition, with six of those dancers earning top spots on the podium. In all, McGrath had a 78 percent recall rate, the highest in this region. 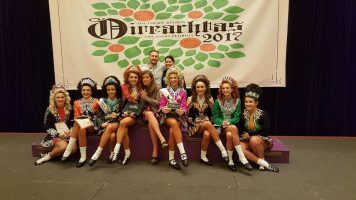 Older winners from the McGrath School

In their first competition, the McGrath dance drama troupe placed second, earning them the qualification to compete at both the national and world competitions.

Aine Callahan, Haymarket, defended her title, taking first place in the girls under 9 competition.  Patrick Gareau, Manassas, took the top podium position, winning the boys under 12 competition, reclaiming the title he won in 2015.

“I am so proud of Aine and Patrick for winning their titles twice,” said Lauren McGrath Dutton. ADCRG, TCRG. “They both worked exceptionally hard this year. Aine is a lovely dancer, who has established herself as the top dancer in our region. Patrick decided last year that he wanted to reclaim first place, and he dedicated himself to making that happen. I couldn’t be prouder of them.”

“I was happy and excited when I heard that I won,” said Aine. “I tried my best and I was thankful.”

“Our dancers continue to show us what determination and hard work can do!” said Ariel Raguso, TCRG. “Thinking back to these kids in beginner classes, they have really come a long way with us, and we can’t wait for what the future can bring!”

The McGrath dance drama team is composed of 20 dancers ranging in age from 8 to 24. The production of “Banshee in the Bedroom” was produced by John Lawrence Morgan, TCRG, who recently joined the school, and will be teaching classes in Bethesda, Maryland, and Falls Church, Virginia. 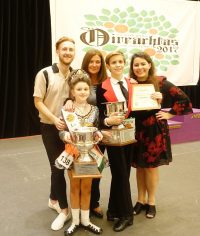 “I am so proud of our award-winning dance drama, which came in second place,” said Morgan. “Taking 20 dancers with very little dance drama experience and watching them grow and mature as performers over the past six months has been so exciting and rewarding! I am beyond proud of what has become a world class team! Drama is a way for our students to grow in confidence, develop their stage presence, and further improve their technique and stamina.”

Morgan holds numerous international titles, including the Great Britain, British National and All-Scotland Championships. He placed in the top three World and All Ireland Championships. Since becoming a certified teacher, he has taught alongside his parents at the Morgan School of Irish Dancing, based in Manchester, U.K., and has contributed to the success of dancers in both solo and team events at all the major Irish dancing championships.

Nine McGrath dancers qualified to compete in the world championship that will be held in Scotland this spring:

Another nine dancers qualified to compete at the national competition in Orlando this summer: