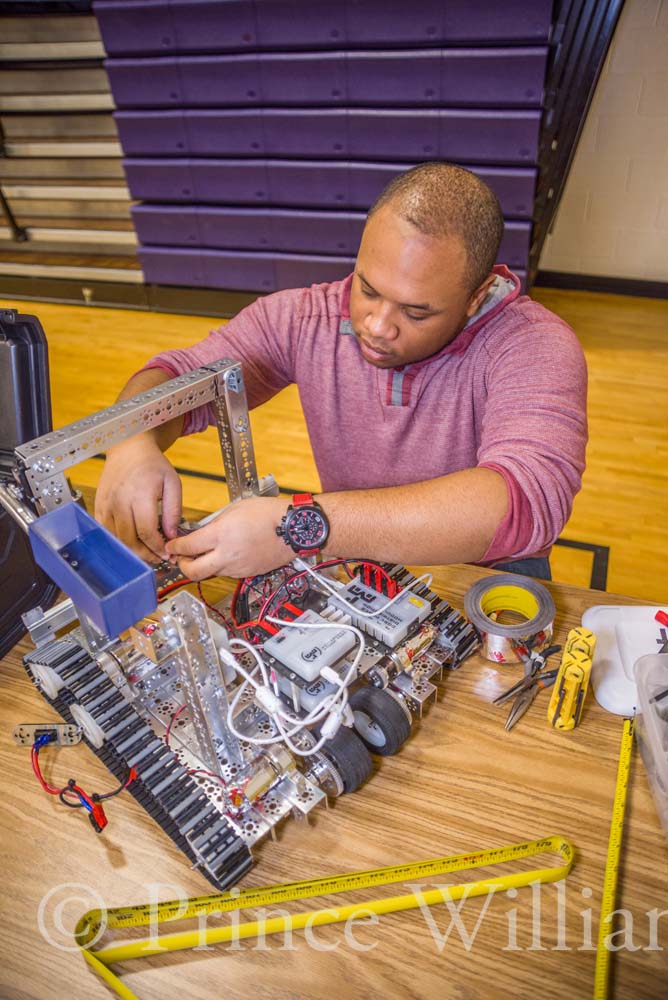 On a cold Saturday morning in early February, Battlefield High School’s gym and hallways filled with an assortment of drones, computers, 3D printers and even a humanoid robot, as Prince William residents, young and old, shared their high-tech secrets and achievements with one other and a stream of curious onlookers at the Haymaker STEM Expo in Haymarket.

Many of those in attendance consider themselves members of the Maker Movement, a global community of inventors, engineers, artists, programmers and tinkerers that are bypassing traditional production models—once the domain of big corporations and multi-million-dollar factories—to design and build for themselves.

The objects they create, which range from prosthetic arms to tote bags to giant LED screens, may have little in common, but their Makers—as those within the movement are known—share a common objective: to transform themselves from passive consumers into active creators.

This goal holds enormous attraction for thousands across the country who enjoy hands-on learning and delight in the thrill of inventing, and the movement is growing at a dizzying pace.

In the last decade, more than 200 independent Maker groups have sprung up in U.S., and Etsy, an e-commerce website focused on handmade items, now features the work of over one million artisan sellers. This has boosted the demand for 3D printers—a favorite Maker tool—and other Maker services to over $2 billion annually. Meanwhile, Maker conferences, or Faires, have been known to draw more than 100,000 attendees. Even the White House hosted its first Maker Faire last year. 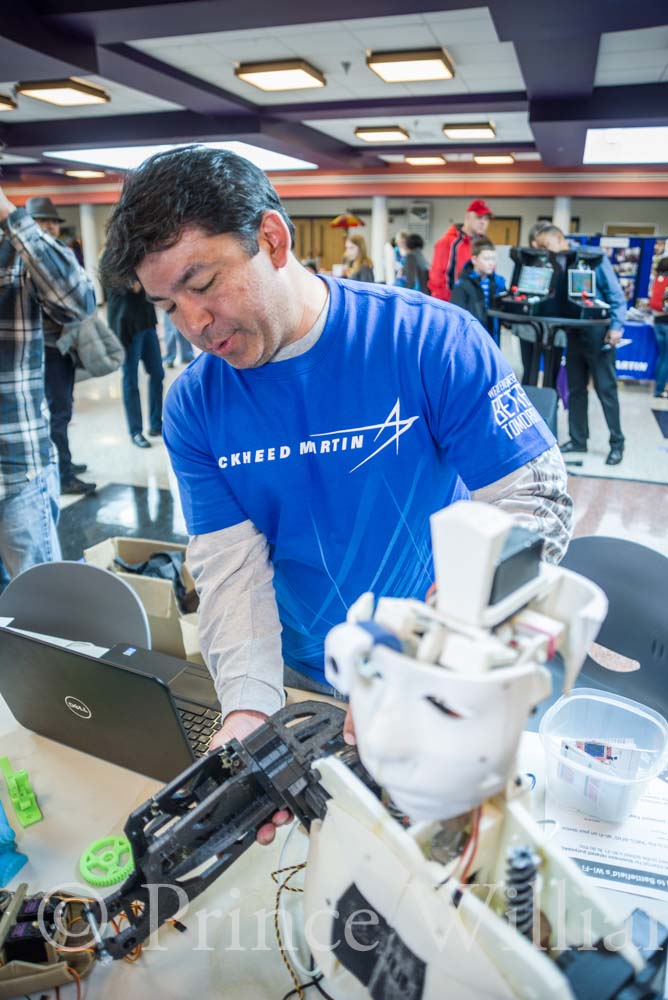 Lockheed Martin engineer Ed Danis started one of the county’s first
Maker groups. Joining industrial know-how and high-tech talents is
the recipe for success, according to Danis. Prince William County
offers both.

At first glance, Prince William may not seem like an ideal incubator for the Maker Movement. But for Ed Danis, a local Maker who started one of the county’s first Maker groups last year, the Manassas Innovation Garage, the area holds much potential.

As an engineer with Lockheed Martin, Danis knows Prince William is attracting big-name tech companies, most notably at Innovation Park. The 1,600-acre corporate park, located outside Manassas, is home to over two dozen tech companies as well as George Mason’s Science and Technology Campus. And many of the 2,000 plus people working there, employed in science, IT and engineering fields, couldn’t be better equipped to become Makers.

Besides Innovation Park, Manassas is also home to an impressive number of industrial businesses, including metal, iron and welding shops. Joining industrial know-how and high-tech talents, in Danis’ opinion, is the recipe for creative success. “The more skills we can bring together,” he noted, “the more innovative our projects are going to be.”

As a former robotics mentor at Bristow Run Elementary School, Danis knows that Prince William County’s schools offer a range of Maker-related activities to their students, and that a large, committed group of parent-volunteers enthusiastically support those programs.

The problem, as he sees it, is a lack of opportunities for Makers outside the schools.

Lacking funds to build a Maker workshop—or MakerSpace— Danis created a Meetup group online to connect with other builders and lay the foundation for a Maker community.

The group now meets monthly at the Bull Run Regional Library to discuss project work, and as Danis hoped, it attracts a diverse group of Makers. These include physicists, artists, engineers and business-minded tinkerers, who range in age from 13 to 60.

The group’s creative output has not stalled for lack of a designated building space. Working at home, Danis and his colleagues have already built a high-altitude reconnaissance balloon, complete with sensors and recording equipment that they will launch into the stratosphere later this year.

“We’re also working on a satellite ground station to track the balloon and send it commands,” Danis mentioned. “In the future we want to work on controlled parachute descents, something that NASA has asked the public to help with.”

In his spare time, Danis is building a humanoid robot, printing all the parts he needs with a 3D printer. He gives motivational speeches to aspiring high school engineers and plans to use the robot as a tool to engage and encourage the students.

Danis hopes that the Manassas Innovation Garage will have a similar effect on the wider community and become an educational resource for Prince William County residents. “For those in the workforce looking for new skills, it’s a great way to acquire a knowledge of electronics, computer science and physics,” he said, “and if you’re still trying to figure out your career path, there are opportunities to learn about industrial trades, too.” 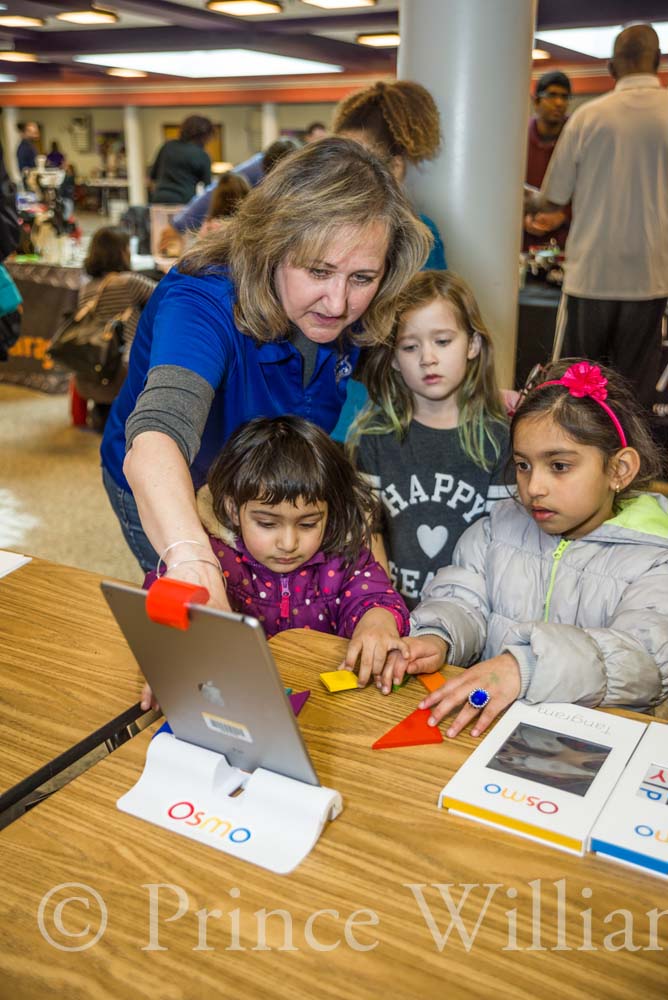 Children get involved with STEM activities through innovative
technology and iPads.

In 2014, Mountain View Elementary School’s principal, teachers and parent community challenged themselves to improve students’ critical thinking and problem-solving skills. Their answer was to create a MakerSpace. With technical assistance from George Mason University, the school’s then principal Michelle Schrecker worked with its Instructional Technology Coach Terry Kapp-Guiffré to convert a story room into a fully-functioning MakerSpace. And with financial support from the University of Mary Washington, the PTO and parent community, Mountain View bought necessary tools and supplies, which included everything from a 3D printer to power tools and yarn.

Excited by the opportunities, teachers and their classes have gone far beyond the school’s minimum activity requirements for the MakerSpace. According to Schrecker, the MakerSpace has been so popular with faculty that the “biggest challenge was keeping it supplied and not double-booking.”

Student interest was so great that Kapp-Guiffré collaborated with the school’s librarian to build two technology stations in the library where children could work on their own. When other schools found out about the MakerSpace, Mountain View began receiving visits by school administrators and staff from Prince William County and beyond.

“Our MakerSpace has become a springboard for schools hoping to launch similar projects throughout the region,” said Adriane Harrison, Mountain View’s current principal. “It’s about helping others repeat this success in their schools.”

On April 12, Mountain View will open its doors to the public when it hosts the Western End Tech and STEAM Fair featuring tech-related projects from elementary schools throughout western Prince William County. 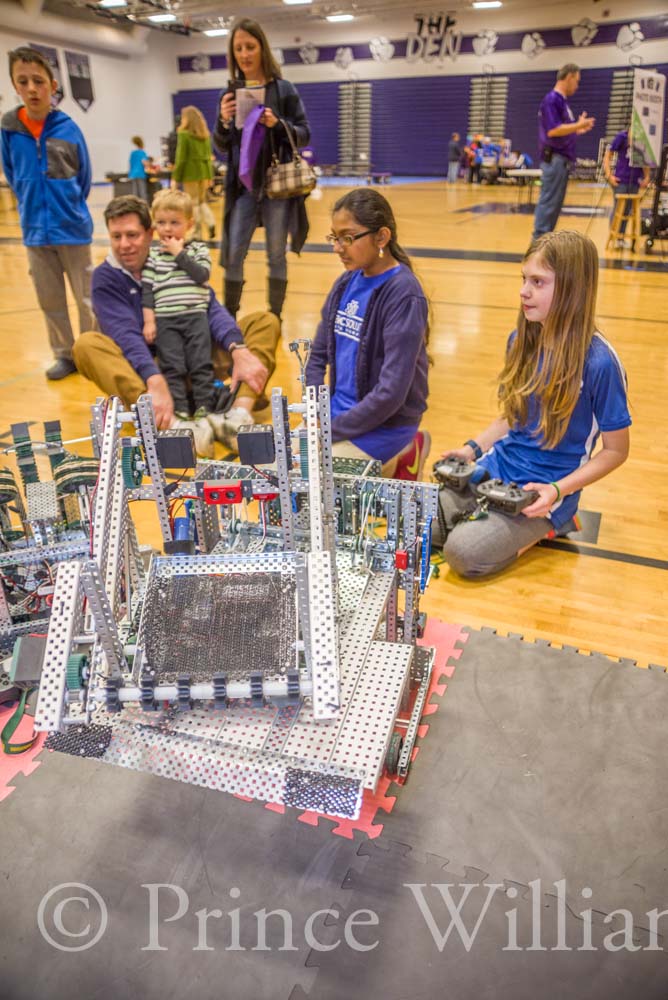 Many Prince William County schools have adopted robotics and Maker-related curriculum components, but none have produced more spectacular results than Battlefield High School in Haymarket.

When Battlefield opened in 2004, the school hired Gail Drake, a former computer science professor, to teach technology courses. Drake founded the school’s robotics team the following year and quickly led it to become one of the nation’s pre-eminent high school teams.

Since building its first robot with a part kit, scrap metal and a lamp shade, Battlefield’s team has won multiple international tournaments, including first place at the FIRST World Championship for robotics in 2014.

To win, the team designed and built a robot from scratch in six weeks, which then outperformed other robots in completing designated engineering challenges.

With the help of adult mentors, students build their robots in two rooms at the high school that have been converted into Maker-like spaces, complete with 3D printers, laser engravers, a milling machine and a lathe.

In addition to the robotics team, Drake and her colleagues have established cyber defense and computer science teams. But due to financial and staffing constraints, they can only accept a fraction of the students hoping to join.

Those that do join immerse themselves in the effort. “This really takes precedence in their lives of its members,” said Justine, co-president of the robotics team. “Many times we’ll end up working on projects until 9:00 p. m. on school nights.”

The hard work pays off. Drake said that all of her team members have gone on to college, and many have embarked on successful careers. “My former students have some of the best jobs,” Drake said. “They’re at Google, Microsoft, IBM, NSA and Lockheed Martin.”

Joe Lowe (jlowe@princewilliamliving.com) lives with his wife and daughter in Gainesville. After working for many years with the National Park and Forest Services, he is now employed with an environmental non-profit in Washington, D.C.