“That’s shockingly high–especially when 85 percent say they want or need to work,” she wrote. “There are more than a million military spouses–700,000 married to someone on active duty and 400,000 on reserve. That’s a lot of untapped potential!”

She added that military spouses possess a wide diversity of talents, experience and goals that can be translated into careers, specifically into small businesses. 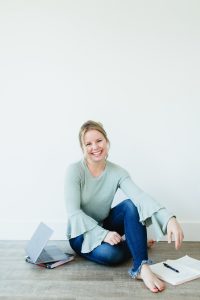 “It’s an incredibly educated group of women from diverse backgrounds, who happen to be sharing in this unique lifestyle all over the world,” she said. “Members have started virtual staffing firms or created
manufacturing companies that employ other military spouses; they’re in technology and coding,
they’re makers, they’re high-level marketers and consultants, and they’ve launched their
own publications.”

More than that, though, Boardman believes the obstacles inherent to military life, and the spouses’ ability to overcome them, make this group uniquely qualified for the business world.

“We understand life is precious, time is the only resource we can’t get back, and we do our best to live those values in our personal and professional lives,” she said. “What might trip up other start-up entrepreneurs is just a little bump for military spouses. We get it done.”

Nowhere is that more evident than in Prince William, where a significant portion of residents boast some tie to the military. Whether active duty, reserve, retired or veteran, many military families are making homes and starting businesses here. 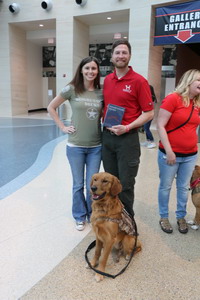 Kickstarting the Deck
Woodbridge resident Joette Orsini turned to Kickstarter.com to gauge interest in her idea for a new card game, designed for  military members and veterans, called Disgruntled Decks.

The goal was to raise $15,000 in 30 days. According to the company website, the card game is for “military service members and grizzled veterans who require offensive and inappropriate conversation to function normally.”

But for Orsini, it’s much more than that. “Humor in the military can be harsh sometimes,” she said. “Our theme is healing through humor. Cards will come up that will remind you of past experiences. People open up and tell stories they might not have told before because this is a safe, fun environment that gets everyone talking.”

The first deck was a collaboration of Army experiences— her husband is in the Army. By October 2017, themed decks were available for all five branches. They are sold through Amazon, and customers have awarded the game five-out-of-five-star reviews.

Still not enough: Orsini said she wants to send the decks downrange. Through a partnership with Operation Supply Drop (OSD), customers can add on a deck (at half price) to be donated to disabled and deployed service members. These decks can be purchased directly through the website disgruntleddecks.com.

“OSD has been great at getting decks dispersed all over the world,” she said. The business has grown to the point that she plans to leave her full-time job in office management to focus on her “side gig” and do more community outreach within the veteran community.

From Home Depot to Home Calls
David Buky worked at a home improvement store while his wife served in the Air Force. “I started working at Home Depot loading carts,” he said. “Then I moved into the plumbing department where I was mentored and stepped into the field of plumbing.”

Today, he is the owner/president of DB’s Plumbing & Drain, which serves residential customers in Prince William, Fairfax and Stafford counties.

“I was growing tired of seeing the industry treated like a used, grimy, crooked salesman,” he said. “I wanted to see more of a white glove service for clients in their homes.”

Unlike most military families, Buky said his hasn’t moved a lot. He met his wife here, and they’ve been married since 2006. She retired in 2010 and joined the family business.

“Not all spouses move around, but some do quite often,” he said. “Their businesses range from part-time hobbies to generate extra income to full-blown [companies]like mine. Spouses do things for different reasons. Some people fall on the heels of the military sponsor, others are the breadwinners, or in my case, my wife and I have equal shares.”

Brick and Mortar … and More
Like many military spouses, Kristi A. Murphy, owner and operator of Calico Jack’s in Historic Downtown Manassas, served in the armed forces. She was a quartermaster before separating from the Navy. Her husband is still on active duty and works at the Pentagon.

After a decade of service, she left the military to focus on her family of five. In her spare time, she made organic soaps and deodorants for family and friends.

“People would stop my husband in the halls of the Pentagon to tell him that he smelled good,” she said. “He would give them samples, and then they’d share those samples with their friends far and wide.”

With a $500 tax return, she purchased enough materials to make large batches of soap, and the business was born, but it still needed a name.

“We wanted something nautical,” she said. “Then we looked up pirate names, and there it was—John “Calico Jack” Rackham! And he was a quartermaster on a ship. That was it!”

At first, she sold products online. Then she branched out to local farmers markets. With those profits, she added a line of deodorants and then candles and bath oils. “Then we were picked up by Whole Foods,” she said. Today, her products are available at eight local Whole Foods stores, all Merrifield Garden Centers and, of course, at her store on Center Street in Manassas.

“Our market following had gotten so big, but unfortunately most farmers markets don’t run year-round,” she said. “We thought it would good for our loyals to have a place to get their Calico Jack’s products year-round.” 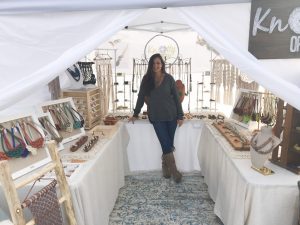 Tricia Driscoll, owner of Knotty Origami, LLC, poses with some of her products.

“I entered the Army as a military intelligence officer in 1997 and served until 2006, when I began work as a civilian law enforcement intelligence analyst,” she said, adding that her husband continued serving in the Army until 2009. “I pursued creative writing after about six months, which was a deviation from the technical/strategic writing I was used to doing. Over time, the idea to start my business evolved when the creative things I was doing and writing about—and that I was also teaching my children—began to have a demand.”

Her business, Knotty Origami, is a handcrafted jewelry and décor business grounded in knots and folds.
“I had grown up learning origami and was fascinated by the cultural knots I’d seen adorning walls and garments in Korea,” she said. “It wasn’t until I went into the Army and had to learn practical knots for rigging operations, and to efficiently store cording, that my interest in learning knotting techniques
really blossomed.”

Driscoll said knotting and folding crafts were a favorite pastime, and she enjoyed teaching her two children some of the decorative forms from their Korean and Irish heritage.

“People would stop and comment on the pieces. Ornate origami bouquets were commissioned for weddings and baby showers,” she said. “I realized there could be a market for these crafts. I checked Etsy and saw that there were people making origami wedding bouquets as well as knotted décor and bracelets and such. So, I decided that it was worth pursuing.”

Knotty Origami can be found online at knotty-origami.com and also on Facebook, Instagram, and Twitter using the handle @knottyorigami or #knottyorigami. Knotty Origami is currently available at the Byrne Gallery in Middleburg; Scout & Molly’s of One Loudoun in Ashburn; Enlightened Styles in Warrenton;
and The Curvy Gurl in Northern Ireland. 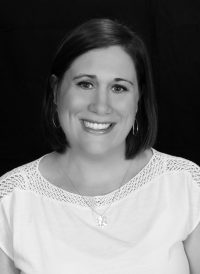 “When we were stationed here in 2013, our family fell in love with the area,” she said. “We realized that this was the place we wanted to remain after military life ended.”

With two young daughters and a husband on active duty, Tauzier knew she wanted to reignite her career, but also realized she’d need a professional option with flexibility.

She got her license in 2015. Although she operates with the team from Berkshire Hathaway HomeServices PenFed Realty, she is an independent realtor. Now settled in Gainesville, Tauzier said she uses her experience with relocating to ease the transition for her clients.

“We have bought and sold homes throughout our military moves, and through the process it really stirred a desire in me to help people just like us,” she said. “I know what it’s like to move to an area and know no one. I want to be able to provide a sense of calm to my clients during this very emotional and stressful time in their families’ lives.”

“I went to school for engineering,” she said. “I worked a variety of corporate jobs but was constantly finding new jobs when we changed duty stations or when we had to make adjustments as our family grew.”

After the move to Virginia, she balanced a corporate job during the week, while capturing their family adventures in photographs during her time off.

“Friends began to notice my personal photos and asked me to take photos of their families,” she said. “I enjoyed working with others and decided to give the business a real shot.”

She started taking online photography classes. “Because my husband has had a very demanding work schedule, photography was something I would spend time learning when he was away, and I had extra time for myself,” she said. “I continue to invest in my photography education and enjoy learning new skills.” 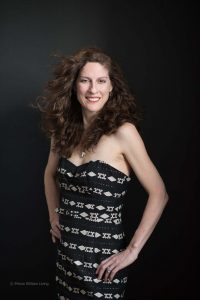 Denise McCall is the
founder of the McCall
Studio Gallery.

The Business of Art
Denise McCall, director/founder of the McCall Studio Gallery in Historic Downtown Manassas, always knew she’d have a career in the arts. What she hadn’t planned on was merging it with her husband’s naval career.

“My family was artistic,” she said. “I come from generations of artists and musicians, so I decided to follow my innate art talents and dreams.”

Those dreams took her to Temple University’s Tyler School of Art in Elkins Park, Penn., and Rome, Italy.

In 1988, she set up a studio freelance business in metro Philadelphia, concentrating her efforts on the nonprofit sector.

“My mission early on was to use my talents for good,” she said. Although she accepted a full-time position with the American Red Cross in Philadelphia, she maintained the studio to work on freelance projects.

In 1998, she met her husband, who was an active duty Navy officer and the couple married soon after. Immediately following their wedding, she moved from Philadelphia to Mystic, Conn., then to Corpus Christi, Texas, and eventually to Prince William. “My business moved where I moved, and I continued my work in various markets across the nation,” she said. This year marks her 30th anniversary in business.

McCall has lived in Prince William for 11 years. Her husband retired in 2014. And a year ago she expanded her business, adding a gallery to the studio, and moved into 9409 Battle Street in Historic Manassas. The historic space has given her the opportunity to provide fine art education for the community as well as to continue her design and brand communications work, the sale of curated fine art and hosting of events.

“Military-spouse business owners are treasures to communities and economic development,” she said. “They offer a wealth of knowledge, are committed and reliable because of their strength, integrity, work ethic and history of public service, as well as their independence, team spirit and creativity honed through extensive travel, service and achievements.”