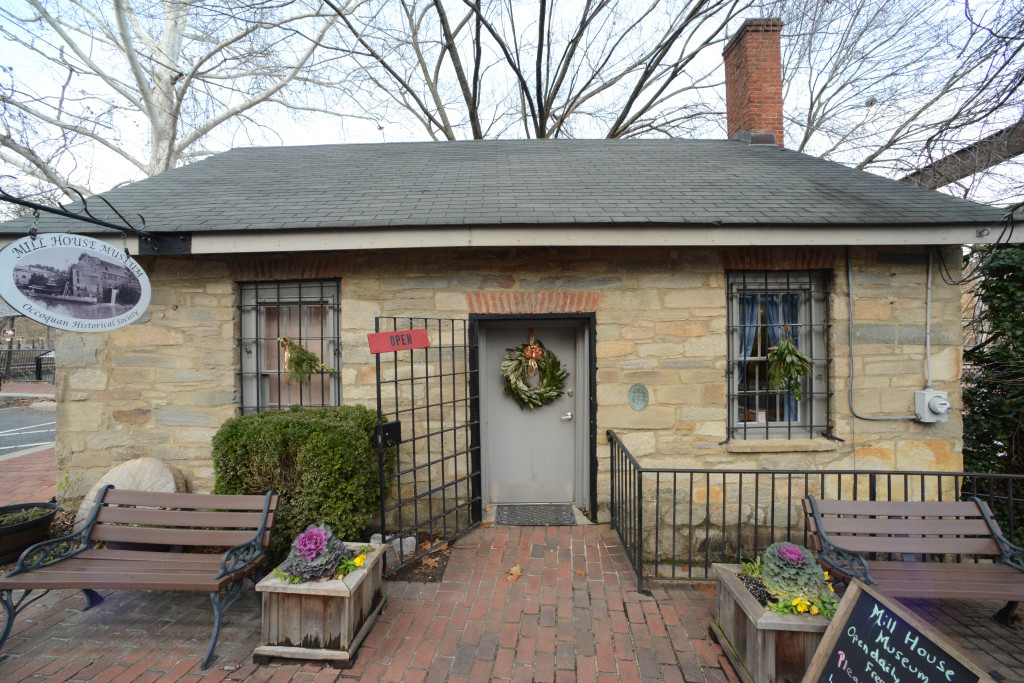 If you want to learn about Occoquan, visit the Mill House Museum at the end of Mill Street, the town’s main road. This small stone building with imposing iron bars on its doors and windows is a remnant of the town’s past and the keeper of its stories. Just be sure to duck as you enter to avoid bumping your head.
Built in the early 1800s, the building housing the museum was once the office of a thriving merchant mill next to the Occoquan River. The automated mill, advanced for its time, ground grain into flour for local and foreign markets. In 1924, the mill was destroyed by a fire from the adjacent Occoquan Electric Light and Power Company.

All that remains of the mill complex today is a disintegrating stone chimney beside the river and the mill office, which remarkably escaped the flames. Vacant for years, the old mill office was eventually sold to the Alexandria Water Company (now Fairfax County Water Authority or Fairfax Water) to use as office space. When the water company no longer needed it, town citizens became concerned about the fate of the historic building.

“Frank McKenzie, who was a retired pilot living in Occoquan, said to me one day, ‘Don’t you think we ought to do something with the mill house?’” recalled June Randolph, an Occoquan resident since 1954. In 1969, she and about 40 other like- minded residents founded Historic Occoquan, Inc., now the Occoquan Historical Society, to preserve the old mill office. Randolph, who is in her 90s, was the not-for-profit organization’s first president and remains a member of its board of directors.

Museum and Its Hours Grow
The water company agreed to lease the building to the group for $1 per year, and Historic Occoquan members got to work transforming the office into the town museum, Randolph said. “Everybody worked, painted or did something,” she recounted.
To pay for the installation of shelves to for the displays, the group purchased three antique furniture pieces, which members refinished and sold.

Randolph said that at first the museum was just open on weekends, and was staffed by volunteers from the historical society. Eventually the organization was able to raise enough funds to hire paid staff to man the museum during the week as well. “Things just kind of took off,” Randolph stated.

Today paid, part-time staff continue to operate the museum, which is open five hours daily, seven days a week, except during major holidays and the town’s bi-annual craft shows. Occoquan now owns the building, leasing it to the historical society, which manages the collection of artifacts inside. “It’s a nice working relationship between the town and historical society,” said Dolores Elder, the museum director and curator since May 2013.

Eclectic Collection Grounded in History
Elder described the museum’s collection of documents, photographs and other artifacts related to Occoquan’s history as eclectic. It includes more than 400 catalogued items, many on permanent display. “I never thought I’d vacuum barbed wire or dust duck decoys,” Elder said of the artifacts that fill the shelves and cases of the one-room museum.

Walking through the museum feels a little like exploring the attic of a favorite aunt. Everything you can imagine fills the shelves and cases. On one shelf, for example, sits medical bags and equipment from 1908 to 1930 that Occoquan doctors used. Near these are pictures of children who attended Occoquan High School in the 1930s. The school, located just outside of town on Occoquan Road, has since been converted into Occoquan Elementary School. Other shelves display arrowheads and collections of baby dolls and tools.

There is even a photo of local fisherman Ralph Turner and his record-setting 34-pound catfish. Nearby is a display dedicated to the town’s sometimes overlooked Civil War history with a tale about abolitionist John Underwood, an Occoquan resident who took a decided unionist stance in a very secessionist county. To the right of the door is a colorful bicentennial quilt that town residents completed in 1978 to showcase various Occoquan businesses, homes and government buildings.

Occoquan townspeople “donated things and we accepted them,” Randolph said of the museum artifacts and other items on display. She explained that most were donated or loaned to the historical society for the museum. “We wanted it to be all antique, but it isn’t,” Randolph added. She and Elder credited Jesse Curtis, of Occoquan, for gathering the collection.

Showcases Townspeople’s Heritage
“Everything [in the collection]has a relationship to someone in town or who lived nearby,” Elder said. As the curator, Elder’s challenge is to create order from chaos in displaying the museum’s assorted collection while showcasing Occoquan’s varied history. The diverse collection “brings our history to life,” she said. To illustrate the town’s industrial past, Occoquan Town Council member Dr. James Walbert painstakingly created a scale model of the destroyed mill. The model is a highlight of the museum’s displays. A table across the room holds sample mill stones children can touch as they learn about the process for turning wheat into flour.

In the spring and summer, museum staff grow cotton and wheat outside in planters and provide milling demonstrations one Sunday a month so children can get a truly hands-on experience. Woodbridge resident and recent first time visitor to the museum Carol Gareca said, “I didn’t know there was so much history around here.”

The museum’s focus will continue to be on the story of the mills that operated in town. After all, Elder explained, “Occoquan was an industrial town.” She added that she hopes to include displays about past town merchants, listing several influential town families, such as the Selecmans and the Janneys, who once had stores in Occoquan. Telling the town’s story is an ever-evolving process. “We’re trying to update things, but still keep the quaintness,” she said.
The Mill House Museum, located at 413 Mill Street, is open 11 a.m. to 4 p.m. daily (weather permitting), except during major holidays and the Occoquan Arts and Crafts Show. Admission is free but donations are accepted. For more information, visit occoquanhistoricalsociety.org/Mill_House_Museum.html.

Carla Christiano is a native of Prince William County and spent a lot of time fishing behind the Mill House Museum, although she never caught a fish. She can be reached at cchristiano@princewilliamliving.com.