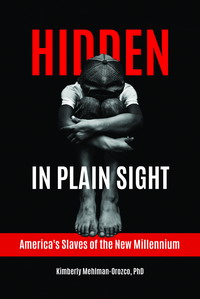 Hidden in Plain Sight by Montclair author Kimberly Mehlman-Orozco will be published through an imprint of ABC-Clio, Praeger, at the end of this month (Oct. 31).

Pimp-controlled sex workers, exploited migrants, domestic servants, and sex trafficking of runaway and homeless youth are just a few of the many forms of sex trafficking and labor trafficking going on all around the world – including in the United States. This book exposes both well-known and more obscure forms of human trafficking, documenting how these heinous crimes are encountered in our daily lives.

“I wanted to take readers behind the headlines on the human trafficking scourge in America,” said Mehlman-Orozco.

The book has been reviewed favorably by experts across the country. “A must-read to understand the mindset of human traffickers and their victims.” (Susan Ingram, Founder, Walk Her Home, and Congressional Victims’ Rights Award Recipient 2017)
“Hidden in Plain Sight is a vital resource, not only for anti–human trafficking advocates, but for anyone who cares about humanity. Dr. Mehlman-Orozco’s interviews with the traffickers are shocking, but they provide insight that can be used when trying to combat this horrific crime. Our organization will be implementing this book into our Advanced Law Enforcement Investigation Course. The material is presented in such a compelling and understandable way that this book will certainly be a powerful contribution to understanding the fastest growing crime in the world.” (Sandra Sparks, Executive Director, ERASE Child Trafficking)
The official book launch event will be held at 1:00 p. m. on Nov. 4, 2017 at Politics and Prose in Washington, D.C.
Share. Twitter Facebook Google+ Pinterest LinkedIn Tumblr Email
Previous ArticleCook in Tuscany Owners Debut Cook, Eat, Play, Travel
Next Article PWCS Fall Teacher In-Service Days and Thanksgiving Break Schedule