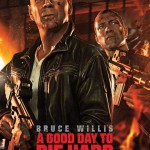 I went into this movie with an open mind.  I thought, “Let’s forget the previous movies in the series, and just start with this guy, John McClane, who used to be a cop.” I got a large popcorn and suspended all disbelief. It worked so well that when this hot blonde came in late and sat down in front of me, I imagined she was hitting on me.

“A Good Day to Die Hard” is not a terrible movie. Irish director John Moore wants to be John Woo, and has made a Russian spy action flick. I get the feeling they had a good idea for a movie and all it needed was a big American star, and they came up with Bruce Willis (Die Hard – 1988, 1990, 1995, 2007, 2013). The one smart guy in the room said, “We don’t need Bruce Willis – we need Die Hard. Bruce Willis couldn’t save Cop Out at the box office, but Die Hard never loses…money. Let’s make him the CIA guy’s father.” That’s how we have “Die Hard,” I mean, John McClane playing about the fourth banana in this smash-’em-up. I do think they wrecked more cars than in “Smokey and the Bandit II.”

There is a nice plot, where the fate of the world is at stake, and to drive home the point they actually threaten terror, nukes and weapons of mass destruction. I expected Bill Murray to join in with, “Dogs and cats living together.” And our friend John McClane is there – “on vacation,” which he said THREE times in the movie. The truth is he was not on vacation; he was looking for his boy. Yeah, I didn’t know he had a son either. Little John, actually called Jack (Jai Courtney of Spartacus – no, the one on TV), is in deep undercover in Russia. Somehow his dad can find him 10 minutes after leaving the cab when the entire Russian police force cannot. It is a fun ride. The guns are bigger, the crashes are more spectacular and they have one chase scene I can only compare to “Super Mario Brothers.” Don’t worry about keeping up — most of the movie is in slow motion. I wish I were kidding.

This movie has none of the charm of the original movie, or the original character. That seems to have gone the way of Bruce Willis’ hair. Just go see it, suspend your disbelief, and say, “Hey, I think that guy’s dad is Die Hard…cool.” When I look at it that way, I can give this movie 2 ½ stars and not feel like I have been let down. And when the lights went up I got another look at that blonde, and reality set back in, and all I could say was, “Excuse me, sir.” 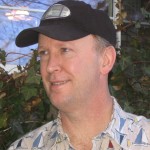