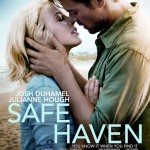 Yes, I saw “Safe Haven.” I could tell you I had to, that it was an assignment or that “Die Hard 15: I Really Am Too Old For This” was sold out, but I will not. I like a good chick flick.  The initials of my film production company are SAP, so what does that tell you?

This movie is about second chances.  For novelist Nicholas Sparks, who wrote the book and produced the movie, it was his second chance to make the movie “Message in a Bottle,” which I liked better. He penned both books about handsome widowers living by the water and women with baggage from out of town. In this version, Sparks seems to have watched that scary Julia Roberts movie “Sleeping with the Enemy” and tried to give his story a harder edge. I am not saying this Sparks story is derivative; it’s more like a bad Xerox. The difference maker here, I think, is director Lasse Hallstrom  (Chocolat). He is a master at taking a script that might be a road map to Wichita–and you don’t really want to go to Wichita–but with Hallstrom driving the bus, by the time you get there you say, “Wow, this is really nice.”

Julianne Hough (Footloose 2011, hold the Bacon) plays Katie, the out-of-towner seeking “Safe Haven.” She holds her own against Josh Duhamel (Life As We Know It), who plays Alex, the attractive and wounded widower. Alex is quite smitten with her, and since he is from the south, he does not look a gift-blonde in the mouth. He does not have the cliché flashback tidbits that take the whole movie for us to see what happened to her. I took points off for that, Mr. Hallstrom.

I need to give a “shout out” to Jim Nalitz (The Vulture’s Eye, Perfect Poison), who starred in some of my movies and showed up on screen.  There are some other plot and character problems, but then I already knew we were going to Wichita. I also knew this was Sparks, and all his stories end with tragedy and tears, but I was not going to fall for that. I’m a tough guy, and besides, I am dissecting this movie like it was a bullfrog in eighth-grade biology class. And I made it, right to the last moments – and then…Niagara Falls…yeah, Niagara Falls.

I give this movie 2 ½ stars – and that is grading on the chick flick curve.  Next time, Hallstrom, if you want to do a flashback, just do it and get it over with. Don’t give us a 30-second flash every 10 minutes for 90 minutes, and I won’t cry about anything else.