The first Oktoberfest was celebrated in Munich, Germany on Oct. 12 in 1810. That tradition continues today, but you don’t have to go to Germany to experience Oktoberfest. You can experience it right here in Prince William County.

Brew Republic Bierwerks of Woodbridge is getting ready to hold its own version of Oktoberfest on Saturday, Sept. 22. It coincides with the start of the festival in Munich this year.

Brew Republic’s Oktoberfest will take place right on Stonebridge at Potomac Town Center from 11:00 a. m.-5:00 p. m. There will be a Marzen (an Oktoberfest beer) contest between participating breweries. Those who buy a beer ticket will get an opportunity to try all the Marzen beers and vote on their favorite.

A beer ticket is $29.99 and will get you a commemorative 20-oz. stein with two full pours. If beer is not your thing, you can buy a wine ticket for $29.99, which includes four 4-oz. wine pours. Make sure to bring the kids. You can get a kid ticket for $5 which includes a plastic commemorative cup, bottled water and unlimited house-made Brew Republic root beer. Kids are not required to have a ticket, but it’s recommended.

But you don’t have to wait until Sept. 22 to enjoy the great beers that Brew Republic offers!  If you come during happy hour (3:00-7:00 p. m.) on Thursdays, you’ll get to try a beer from the Randall.

The Randall is a beer infuser with two chambers that you can fill with any ingredient (or ingredients) you want, such as fruit, jalapenos, cucumbers, or anything you want to mix with one of Brew Republic’s beers. The beer runs through the chambers and comes out infused.

Every week Brew Republic does a “Citizens’” choice where customers can suggest pairings of certain ingredients with certain Brew Republic beers. Then a poll is created, and whichever idea wins is the beer that gets made on Thursday.

As of early August, the brewery rolled out a new menu featuring new items such Bacon Poutine, a Surf & Turf dinner, and Xango Cheesecake.

Minister of the Drinkery (General Manager) Max Mitchell explains, “We [kept]many of our citizens’ favorites, like The Republic Club sandwich, Fish & Chips, and Soft Pretzels & Beer Cheese. But we have been listening to what people want when they come to our taproom and have reworked our menu to provide a wider variety of options for entrees, appetizers, soups & salads, sandwiches, and even dessert”

Brew Republic Bierwerks opens every day at 12:00 p. m. and is located at 15201 Potomac Town Place, #120 in Stonebridge at Potomac Town Center. 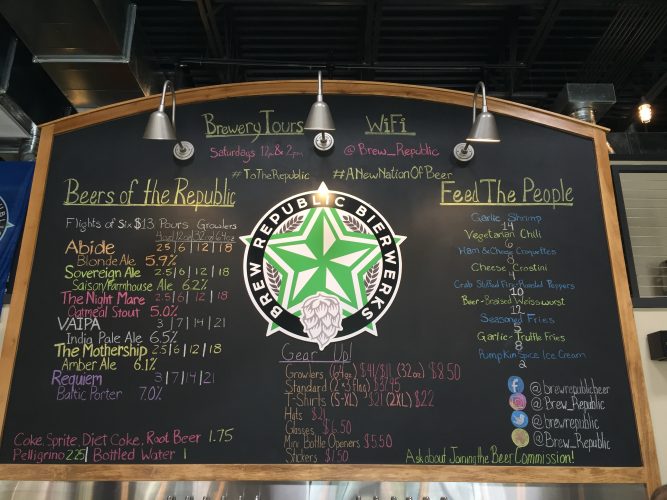