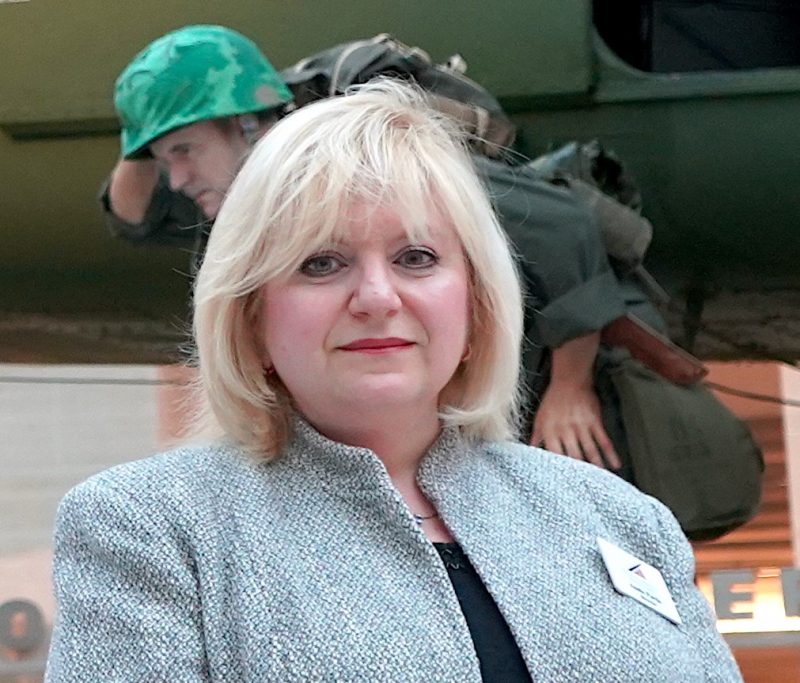 Provided by National Museum of the Marine Corps

The National Museum of the Marine Corps announces Annie Pardo as its new director. Pardo brings a diverse museum background and some unexpected skills. She is well positioned to keep the Museum moving into the future and beyond its walls.

“The Marine Corps has a long and rich history and it is an honor to help tell this history as a whole as well as the stories of individual Marines. The overall visitor experience at the Museum is a powerful one. The Museum has an excellent team of highly-skilled professionals who have done an outstanding job of developing the exhibits and caring for the collection while providing strong educational programs for the
public. I look forward to using my experience to continue building on the Museum’s impressive reputation,” Pardo said.

Pardo comes to the Museum from the Bureau of Indian Affairs (BIA). Beginning in 2010, she served as the Museum Program Manager, overseeing a national program of Federal museum collections and cultural resources. With more than eight million objects at 157 repositories across the country, Pardo was responsible for everything from curation, research, collections management, and exhibits. She also handled outreach and government-to-government tribal consultation, in a wide range of disciplines and cultural regions.

“Rebuilding the BIA’s museum program presented many challenges but also many rewards. The most
rewarding work involved my role at the BIA’s Coordinator for the Native American Graves Protection
and Repatriation Act. I …facilitate[d]the repatriation of ancestors, funerary and sacred objects to tribal communities,” Pardo said.

As if she needed something else to fill an already busy schedule, Pardo earned her law degree in 2011. She said she’d always had an interest in the law so when the opportunity presented itself, she grabbed it. Leaving her job with the BIA to go into full-time practice wasn’t practical, so she did pro bono work. “I
put my skills to use helping those who couldn’t otherwise afford a lawyer, representing victims of
domestic violence in family law matters. It was a wonderful opportunity to give back and help right the
wrongs that my clients had suffered,” Pardo said. “The training that I have in mediation and not fearing litigation has been extremely helpful, even outside of the courtroom. Knowing the law, and finding loopholes, puts me in a position where I can take a firm stand but also find alternate ways to bring parties together to accomplish a mutual goal.”

Past Experience and Education

Prior to her time at the BIA, Pardo was responsible for re-establishing the FBI Tour as a museum curator
with the Federal Bureau of Investigation from 2005 to 2010. The FBI Tour, which had been one of D.C.’s
most popular tourist attractions, was closed after the Sept. 11, 2001, terrorist attacks. Pardo received the directive to revitalize the exhibits and set to work interviewing agents and turning what had previously been evidence into collections. FBI Headquarters now has a self-guided tour with interactive multimedia exhibits and artifacts that help tell the stories of the men and women of the FBI.

Pardo began her Federal career at the Smithsonian Institution as a museum assistant while working on
her Master’s in Museum Studies at The George Washington University.

All of that experience will serve her well as she takes on her role at the National Museum of the Marine Corps. While she’s new to the Marine Corps, she doesn’t see that as a detriment. “I bring significant education, a diversity of experience, flexibility, and adaptability which will help me learn quickly and make positive contributions to the team of museum professionals, volunteers, interns, and docents.

“I’ve also gained much through life experiences: a deep interest in learning about people, a love for objects and the tales they tell, and a passion for storytelling. My experience in rebuilding two museum programs, and developing partnerships with museums and Federal agencies, will serve the Museum well as we move forward with telling the Corps’ story to the current day and into the future,” Pardo said. “The only thing these experiences haven’t prepared me for is all the military acronyms, but I’m making fast progress.”

Pardo will have many opportunities to put her skills to use as the Museum continues to build out the historical galleries that tell the Corps’ story from 1976 to 2015, a Marine Corps Sports Gallery and Hall of
Fame, a Hall of Valor, and a changing exhibits gallery. The continuation of Legacy Walk is expected to
open in early 2020, with other gallery openings planned for the coming years.

The Museum is a public-private partnership between the U.S. Marine Corps and the Marine Corps
Heritage Foundation. The National Museum of the Marine Corps, under the command of Marine Corps
University, preserves and exhibits the material history of the U.S. Marine Corps; honors the
commitment, accomplishments, and sacrifices of Marines; supports recruitment, training, education,
and retention of Marines; and provides the public with a readily accessible platform for the exploration
of Marine Corps history. It is located at 18900 Jefferson Davis Highway in Triangle, and is open 9:00
am to 5:00 pm daily except Dec. 25. Admission and parking are free. For more information, call
703-784-6107 or visit on the web at usmcmuseum.com.