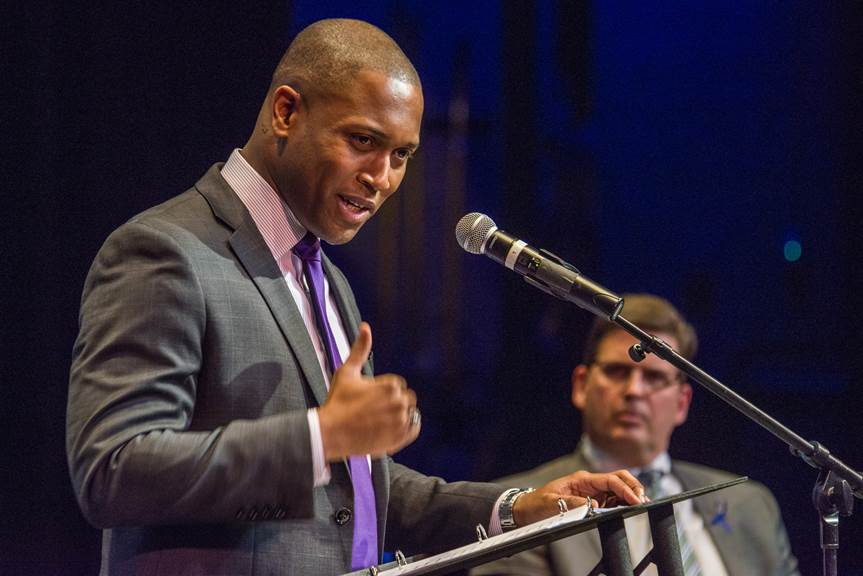 Aaron Gilchrist, Anchor of News4 Today will serve as Master of Ceremonies for the 31st Annual Prince William Valor Awards honoring local superheroes in police, fire and rescue. He is shown here officiating at the 2016 awards. This is his second year.

On March 23 from 2:00-4:30 p. m., Aaron Gilchrist, Co-Anchor of News4 Today will join the members of the Prince William Chamber of Commerce and presenting sponsor Sentara Northern Virginia Medical Center, for the 31st Annual Prince William Valor Awards. Open to the public with tickets priced at just $25 per person, the Prince William Valor Awards are held annually to recognize men and women in uniform who go above and beyond the call of duty in keeping the Prince William region and its people safe and secure: local superheroes. For the third year in a row, the event will be held at the Hylton Performing Arts Center, located at 10960 George Mason Circle in Manassas.  To register, go to PWChamber.org/Valor, or call 703.368.6600.

Gilchrist, serving as Master of Ceremonies, will read aloud the stories of the various acts of valor. Incidents for which heroes are being honored include a kidnapping, back-to-back rescues, several 18 + month rape investigations, a complex watertower rescue and the murders of two workers at Youth Quest. Youth for Tomorrow is the Speaker Sponsor.

Awards are given out in the Valor and Investigative Categories. Valor Awards recognize bravery and heroism, often in life-threatening situations where quick thinking and ingenuity are valuable. The Investigative Awards highlight work like crime scene processing, evidence analysis and detailed work leading to the successful closing of major cases.

The event opens with a reception catered by Okra’s Cajun Creole in the Didlake Grand Foyer. Attendees include award recipients, their families, Chiefs of the local fire and police departments, volunteer fire and rescue personnel, elected officials, leaders in the business community and you. At approximately 3:00 p. m., you and an anticipated crowd of 400 will be ushered into Merchant Hall for the awards ceremony, which opens with the presentation of colors by the cross-jurisdictional public safety color guard and a benediction.

“The Prince William Chamber takes great pride in recognizing those who perform extraordinary acts of self-sacrifice and bravery in the line of duty. Year after year I am awed and sometimes saddened at the things our Valor Award winners have endured. You can tell by the expressions on their faces as their efforts are recounted before a live audience; they were just doing what they feel called to do. But as leaders in this community, it’s vital that we pause to make sure they know how important they are to us. We are hopeful that the community will join with us in honoring those who risk so much to protect our lives, our livelihoods and our quality of life,” said Chamber President & CEO Debbie Jones.