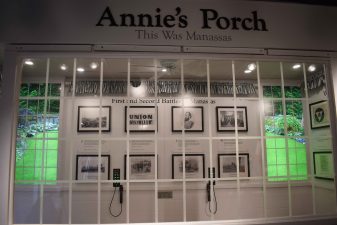 Beginning March 19, 2018, a new immersive exhibit will open at the Manassas Museum.  Annie’s Porch: This Was Manassas, spotlights the universal storytelling tradition of talking on the front porch with friends. The exhibit is part of a larger update to the museum’s permanent gallery.

Inside the exhibit, visitors can listen to stories about Manassas during the Civil War and World War II eras, and stories about the nationally known Manassas Industrial School for Colored Youth formed in 1894. Local actors, including Dylan Pritchett, a professional storyteller familiar to Colonial Williamsburg, Monticello and Jamestown visitors, recently recorded the stories that were drawn from first person accounts. Telephone-like devices tell stories that may have been shared in this tradition, and more stories will be added in the future.

Named for the late Ann Harrover Thomas, the exhibit honors the extraordinary way the former museum volunteer and board member shaped the civic life of her community – storytelling on the enclosed porch of her Manassas home.

In addition to the construction of the Annie’s Porch exhibit, the Museum updated other displays in the permanent gallery.  Additions include an expanded exhibit on the Manassas Industrial School for Colored Youth and its founder Jennie Dean, a reinvigorated display on the development of the town of Manassas, a new display on sports and entertainment in the city, and a photo collage showing the diversity of the community.

Curator Mary Helen Dellinger calls the new additions “a stunning new look that features images, objects and stories from our collection that we have wanted to share for a long time. I am very pleased with how this turned out. We knew that adding the Annie’s Porch exhibit would allow for a re-evaluation and re-configuration of the space around it.  We took our time and got feedback from staff, volunteers and the community. The end result is something that everyone will enjoy.”

Although the new exhibits mark the first major update to the museum’s permanent gallery, other displays are rotated through temporary exhibit space.  Artistic Expression, featuring the art of students from Osbourn High School, is open now through April 1.  Living the American Dream: Robert Portner, Immigrant, Entrepreneur, Philanthropist opens April 13, as does Expanding Boundaries, a look at the impact of the Manassas Boys and Girls Club.

The Manassas Museum grew out of the city’s 1973 centennial celebration, when Walser C. Rohr, Ann Harrover Thomas’s aunt, assembled artifacts for display in a trial museum. A permanent museum was located in the historic National Bank building on Main Street until the present museum on Prince William Street opened in 1991.