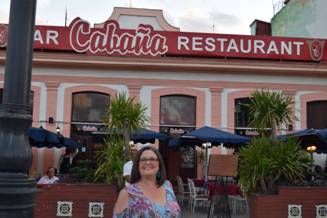 Photos: Linda Meyer, co-owner of Cook in Cuba, takes in the sights of Cuba, preparing for their first Cuban culinary tour.

‘Welcome to Cuba!’ is what you’ll hear from George and Linda Meyers, owners of Cook in Tuscany and Cook in Mexico at their latest culinary tour spot–Havana, Cuba . Cook in Cuba is now taking guests to Old Havana, exploring Cuban cuisine, history and culture. Cook in Tuscany, a Tuscan culinary tour, recently named one of the top 15 Foodie Destinations by USA Today, just launched its third culinary tour, Cook in Cuba in Havana, Cuba. For more information, go to cookincuba.kitchen.

Cook in Cuba follows this culinary’s tour’s mantra of Cook, Eat, Play. Guests learn about traditional cooking skills and story-telling in the kitchen. Teachers use time honored recipes that were handed down from generations. Visitors will dine on fried plantains, grilled lobster, seafood stew, roasted pork and fresh fruits, as well as Cuban beer or traditional mojitos, while also visiting area food markets and local paladars. Tours include a walk through Old Havana, including rides in a 1950 Chevy to Revolution Square, and a CoCo Taxi for a trip around the city, seeing historic sights and meeting the people of Havana with home visits. Guests can also tour historic HersheyTown, and stop for fresh crackers and peanut cream, local made rum, and even roll a cigar on a tobacco plantation. Cook in Cuba provides sights that Americans have not seen, or visited since 1959.  The tour is completed with views of Cuban mansions of yesteryear and a walk on The Malacon to listen to the waves crash on the old stone wall.

“When Cuba opened its doors to travelers, we knew that so many people would love the opportunity to see the sights of this country that have gone unseen for so many years,” said Linda Meyers, co-owner of Cook in Cuba of Haymarket. “We’re already booking our Cook in Cuba culinary tour through 2019, we’re looking forward to showing our guests the amazing culture and taste of Cuba,” said Meyers.

Cook in Cuba was created by Haymarket-based owners, George and Linda Meyers, a Northern Virginia couple that hosts their worldwide guests on cooking tours in Cook in Tuscany in authentic Tuscan kitchens, and guides guests on personalized Tuscan historic tours and truffle hunts, and Cook in Mexico, a Mexican culinary tour in San Miguel de Allende.

United States Air Force pilot George Meyers and his wife, Linda, now a retired Prince William County school teacher, are natives of New Orleans and high school sweethearts. The Meyers shared a long-time passion for good food. The Meyers personally take guests on all tours, creating an immersive experience in Tuscan, Mexican and Cuban cuisine and culture. The week-long package tours are all-inclusive of hotels and food, not including air fare.