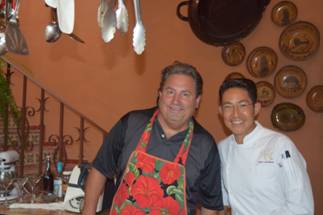 Mexico isn’t just known for its beautiful beaches. Cook in Mexico is now taking guests to the heart of Mexico and the heart of Mexican cuisine. Cook in Tuscany, a Tuscan culinary tour, recently named one of the top 15 Foodie Destinations by USA Today, just launched its second culinary tour, Cook in Mexico in central Mexico, San Miguel de Allende. Cook in Mexico was created by Haymarket-based owners George and Linda Meyers, a Northern Virginia couple that hosts their worldwide guests on cooking tours in Cook in Tuscany in authentic Tuscan kitchens, and guides guests on personalized Tuscan historic tours and truffle hunts. Now guests can experience the traditional flavors and storytelling from the Mexican cooks, visit historic sites, dance to Mariachi and climb the ruins of Cañada de la Virgin. For more information, go to cookinmexico.kitchen or cookintuscany.com.

Cook in Mexico was created in 2016, and is booking for 2017 and 2018; 2017 classes are filling up fast. Cook in Mexico was born out of the Meyers’ love for the Mexican scenery and food, and requests from their Cook in Tuscany guests about other culinary tour locations; they immediately thought San Miguel, Mexico was the perfect site. Retired United States Air Force pilot George Meyers and his wife, Linda, now a retired Prince William County school teacher are natives of New Orleans and high school sweethearts. The Meyers shared a long-time passion for good food. The Meyers personally take guests on all tours, creating an immersive experience in Mexican cuisine and culture. The week-long package tours are all-inclusive of hotels and food, not including air fare.

Cook in Mexico is a six-day tour, with all-inclusive Mexican cooking classes in the cosmopolitan and historic town of San Miguel de Allende, Mexico.  Based in Northern Virginia, Cook in Mexico was founded by New Orleans natives George and Linda Meyers. The tour includes cooking classes with Mexican cooks, tours of historic ruins, art gallery walks and a climb of the  Cañada de la Virgin ruins. The Meyers also created Cook in Tuscany, which was rated by USA Today as a top 15 Foodie Destination, and recommended by JourneyWoman and Epicure & Culture. Cook in Mexico and Cook in Tuscany are luxury, culinary vacations for the traveler who wants to be a local, and not a tourist.   Go to cookinmexico.kitchen or visit them on Facebook or Twitter@CookinMexico.