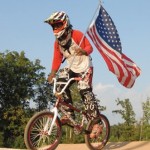 The sport is different than what most people imagine, according to NOVA BMX President Jennifer Helmick, a Bristow resident whose whole family enjoys the sport. “Most people associate BMXing with the ﬂips and tricks they see on TV, but this is actual racing. The riders line up at a gate and go through the track,” she said.

Helmick’s son Josh, 10, said he was hooked after the ﬁrst time he saw BMX on television. “I asked my mom about BMX after I saw freestyle BMX on TV. She looked it up and found out about NOVA BMX.”

Soon after, the whole family caught the BMX bug, including Helmick, her husband and their youngest son Jacob.

The Prince William County Park Authority (now the Department of Parks and Recreation) opened the track in 2000 and operated it for several years. When the track lost county funding, parent volunteers came forward to run it so that BMX could continue in Prince William.

Anyone can come out and race; there are no age restrictions. “I once saw a 3-year-old at a national race, and I know a guy who is 78 and still rides,” Helmick said.

“To start racing all you need to know is how to ride a two- wheeler,” Helmick said, adding that all riders must wear a full-face helmet, long pants, a long-sleeved shirt and closed-toe shoes. 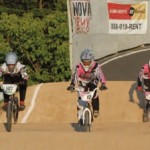 While professional BMX bikes diﬀer from normal street bikes, you can bring your own bike to the track to try out the sport as long as it checks out with organizers, Helmick said.

“We like to make sure new riders’ bikes are safe for the track. We have to do things like remove the kickstand or zip-tie it down because BMX bikes don’t have them,” she said. “They also don’t have gears, only have one back brake on the handlebars and are much lighter weight.”

A membership in USA BMX, the sanctioning body of BMX racing, is required to ride on any of its aﬃliate tracks, including NOVA BMX. Memberships for one day, 30 days and a full year are available at the track and online.

“To try it out for the day, you can get a one-day membership, where you just have to pay a track fee for scheduled practices or races,” said Helmick.

A 30-day membership costs $30 and includes practice and race fees. However, “you won’t be able to gain points from races with those,” Helmick explained. “The full-year membership is only $60, and you can ride in both bike classes.”

“Before a race, riders go through two motos, or qualifying heats. Usually people drop depending where they ﬁnish in the motos. So not everyone will go to the main race,” Helmick explained.

Racers compete against each other based on age and proﬁciency. Riders typically get two kinds of prizes if they ﬁnish at the head of a race: trophies and “saver” stamps. The stamps can be used to purchase merchandise from USA BMX and with other vendors at national and regional races.

In addition, racers gain points in the competitions. “At the end of the year the number of points a rider has determines what number plate they get,” said Helmick. “If they come in ﬁrst in their district, they get a number-one plate. If they come in second, they get a number-two plate.” A plate is a small shield, placed at the front of the handlebars, indicating riders’ rank within their proﬁciency and age classes.

NOVA BMX’s serpentine track, which underwent a rebuild this year, includes custom features, according to Helmick.

“We have a custom-built safety gate here that is unique. Most of the starting gates have one solid piece of metal, and that’s pretty heavy. Ours has individual panels with springs. So if a rider falls and an arm gets caught under the gate, only a single section falls instead of the whole metal bar,” she said.

The track also includes features standard to most BMX tracks. “Every track is designed diﬀerently, but it generally consists of three berms,” said Helmick, referring to the high-banked hairpin turns. “Most of the tracks have four straights, like ours. Our track has asphalt turns where some tracks only have dirt turns.”

Helmick said two USA BMX national teams are associated with the park: Powers Bike Shop Team and TSS Racing. Both accept all skill levels and ages and give riders the chance to travel around the country. Powers Bike Shop is located in Nokesville.

“When I was 11, I started racing at the national level. I’ve been to New York, Kentucky and Pennsylvania. The farthest I’ve gone is Illinois,” said Woodbridge resident Qishan, 14, who started riding at 10 years old. “One of my elementary school teachers volunteered at the park and set up a BMX Rodeo when I was 10.… I really enjoyed it and started racing as soon as I could,” he said.

Like many parents of BMX racers, Lisa Bell, Prince William County School Board member for the Neabsco District, got into BMX herself after her son Collin, 18, began riding four years ago. She now races and has helped implement bike safety courses in school curriculums and bike-to-school programs.

“I welcome anyone out to the track [at our home]to try BMXing. I’ll even let you use my bike,” she said. Collin set up a BMX track behind their house.

A Lot to Offer

Racing at NOVA BMX has a lot to oﬀer both kids and adults. “It’s a great family sport because the parents don’t have to just sit on the sidelines; they can go out on the track with their kids. Some kids don’t live in neighborhoods where they can ride their bikes. So they ride them here and have fun with all the jumps,” said Helmick. “It’s also a great way to make friends; all the kids are really nice.”

To learn more about NOVA BMX, located at 7 County Complex Court in Prince William, visit http://www.novabmx.org. There is no admission for spectators, who are always welcome.

Paul Keily lives in Fredericksburg and recently graduated from the University of Mary Washington with a degree in English and a concentration in creative writing. He can be contacted at [email protected]rincewilliamliving.com.