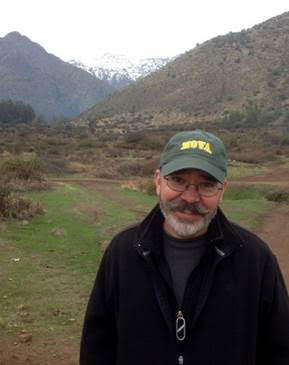 William Woodard in Santiago, Chile, with Cerro La Cruz in the background.

“In the summer of 2014, I applied for a Fulbright grant to teach in South America with high hopes but not really expecting to meet with success given the competition,” Woodard said. “I went through the process of writing a proposal, getting letters of recommendation and contacting possible host institutions with my fingers crossed. To my welcome surprise, I found out just before Christmas 2014 that I had been selected for a grant to teach English at the Pontificia Universidad Católica de Chile in Santiago for the fall 2015 semester in their master’s degree program.”

Woodard arrived in Chile in July 2015 with his wife, Carolyn, and their two children, 8-year-old Jack and 7-year-old Katie. PWL The family spent the next five months exploring the country when Woodard wasn’t teaching.

“We enjoyed the very active street scene in Santiago,” Woodard said. “There is art everywhere and street performers like musicians, dancers and acrobats are common. The architecture is an interesting mix of old and new.”

The family visited an active volcano and several port towns where they eagerly sampled the local seafood. They were also in Chile when a magnitude 8.3 earthquake hit, the sixth largest earthquake in the history of the country.

“Our 26-floor apartment building shook and swayed but there was no damage,” he said. “We were told by several people that earthquakes are a part of life in Chile and it does appear that Chileans take them in stride. However, my family agreed that we did not want to experience another.”

After they returned to their home in Warrenton at the end of December 2015, the Woodards agreed that their time in Chile has enriched their lives immensely.

The family’s Chilean adventure was made possible by a grant from the Fulbright Program, the flagship international educational exchange program sponsored by the U.S. government.

Administered by the U.S. State Department’s Bureau of Educational and Cultural Affairs, the Fulbright Program is designed to increase mutual understanding between the people of the United States and the people of other countries. The competition for Fulbright Program grants is merit-based. Candidates are selected based on a variety of factors that may include academic qualifications, project feasibility, personal leadership ability and available grant funds. In 2015-2016, NOVA led all community colleges in the U.S. in producing Fulbright scholars.

Since Fulbright recipients are encouraged to teach others about the cultures they have experienced, Woodard has been sharing what he learned through presentations to his NOVA colleagues and speaking engagements with local organizations.

Woodard has taught English as a second language at NOVA’s Manassas Campus since 2003. He holds a master’s degree in Spanish and English linguistics from Georgetown University and another master’s degree in Teaching English to Speakers of Other Languages (TESOL) from Shenandoah University.