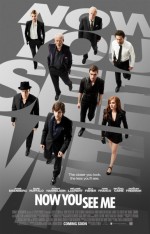 “Now You See Me” at the movie with the same name. This was my second magic movie of the year, but this one is not a comedy. It’s listed as a crime thriller, though it’s more of a “Who done it?”

Four different kinds of magicians are brought together by someone who provides them with a plan for some amazing tricks. Daniel (Jesse Eisenberg of The Social Network), Merritt (Woody Harrelson of Zombieland), Henley (Isla Fisher of Wedding Crashers) and Jack (Dave Franco of Superbad) take up the challenge partly because of their ego, but mostly as a gateway to true magic and to meet the man behind the curtain.

The trailer does a good job of setting up the first act, but as magic debunker Thaddeus Bradley (Morgan Freeman from Driving Miss Daisy) says, “you have not seen anything yet.” Thaddeus is impressed, but not fooled as he assists FBI agent Dylan Rhodes (Mark Ruffalo of Rumor Has It) in tracking these 4 horsemen (their moniker, not mine) and bringing them to justice. At least, Dylan is stuck with Interpol Detective Alma Dray (Melanie Laurent of Inglourious Basterds) so he has a pretty face with whom to complain. She is stunning, but her only purpose in this movie is to look pretty and to be a possible love interest for Dylan.

The three big tricks come one in each act.  By the time we get to the third act we are curious, and like everyone else on screen, tired of being fooled. There is a great premise here.  However, we were all subjected to the misdirection of the magicians, and I came to see a movie and not a magic show. The majority of the screen time was spent on the spectacle, with a few glimpses now and then of what was really going on. A little more story and character work with a little less hocus pocus would have helped my emotional connection to the ending.

The movie is entertaining and mostly original, although robbing a bank thousands of miles away using magic was first done by Johnny Carson in 1955. Director Louis Leterrier of the “Transporter” movies seems at home with the action scenes, but nothing else. All we ever know about the Transporter guy is that he is a bad ass behind the wheel. In this magic movie, too much is hidden from the audience. Our magicians are smug, little smartasses that are never in real danger. In the end, like with most magic tricks, we are left amazed and then empty, feeling like a sucker. I admit the magic was awesome, but the movie was just okay. I give it 3 out of 5 stars for making my nine bucks disappear.

Here is a link to his movie review site:  http://bashmovies.wordpress.com/