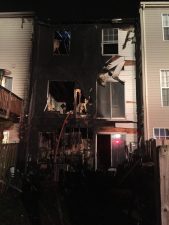 On April 22 at 10:37 p. m., Occoquan-Woodbridge-Lorton Volunteer Firefighters responded to the report of a townhouse fire off Sugar Hill Drive in Woodbridge. A second caller reported the fire in the next neighborhood located at 1862 Beegee Court, and responding units were immediately redirected. Crews arrived within minutes and reported fire showing from the back of the townhouse.

Crews extinguished the fire on the exterior and then made entry into the house, also heavily involved with fire on all three floors. Fire damaged the siding of both neighboring townhouses, but crews prevented it from spreading and causing additional damage. The fire was under control within 50 minutes.

The blaze is under investigation by the Prince William County Fire Marshal’s Office. Two adults, two children, and one dog were displaced. There were no reported injuries. Fire and rescue units from OWL VFD, Dale City VFD, Prince William County, and Fairfax responded to the incident.

OWL VFD is one of the largest and busiest volunteer fire departments in the United States with almost 300 members. OWL VFD provides fire suppression, EMS care, and rescue services to 80,000 residents in our 27 square mile area through the operation of three fire stations. OWL volunteer Firefighters and EMTs work the 6:00 p. m. to 6:00 a. m. shift, five days a week, plus 24/7 holidays and weekends.

For more information on OWL VFD, visit owlvfd.org or become a fan on Facebook at facebook.com/owlvfd.