Driving along the George Washington Memorial Parkway, glancing out at the Potomac River, you may wonder if there anything else to see other than the National Harbor and the MGM Casino.  If upscale stores and restaurants are not your thing, and you are not a gambler, but you are a history lover, there is much to see.

At the Oxon Hill Farm, previously a farm used to grow food for a nearby hospital, one can see chickens being fed, cows being milked,  livestock and horses graze the field and pigs roaming around in the pen.  It is a working farm operated by the National Park Service.  You can learn more about the farm, the history and about things to do at nps.gov/oxhi/index.htm.

What about real history?  Drive south to Fort Foote.  It is an earthen fort that was built on top of a bluff to protect Washington, D.C. during the Civil War from invaders on the Potomac.  Two of the cannons that were used in the fort still remain.  Although most of the fortifications are overgrown, you can still get a glimpse of what it was like at the fort.  It is operated by the National Park Service and is open 9:00 a. m. to sunset.  There is no admission fee.  To learn more about the fort, visit nps.gov/fofo/index.htm.

On the way to Fort Foote, you can drop by Saint John’s Episcopal Church.  Although the church itself is not open to the public, you can walk the grounds.  George Washington was one of this church’s famous visitors.

Have you ever wondered where Fort Washington, Maryland got its name?  Unlike some towns with ‘fort’ in their name, this one really is named after a fort.  It is a relatively unknown fort, as it was originally built to protect Washington, D.C. from invaders coming up the Potomac River, but unlike Fort Foote, this is a much larger fort that could be seen for many miles.  (It never saw any military action.  The British took a different route to attack Washington during the War of 1812.)  It remained a military outpost until 1936, when it was given to the National Park Service.  Many of the structures remain.  You can also walk around the fort and see how it still protects the river to this day.  For more information, visit  nps.gov/fowa/index.htm.

Farther south is the Colonial Farm at Piscataway Park, a living history farm showing farm life in 1770.  Then you can take a hike along the many trails and get a great view of Mount Vernon on the hill across the river.   Piscataway Park is operated by the National Park Service and is open every day all year round; the Colonial Farm is operated by the Accokeek Foundation and is only open on weekends from March to December.  You can get more information at accokeekfoundation.org/.

Farther south on Maryland Route 210, turn right onto Marshall Hall Road (Maryland Route 227).  Go all the way to the end of the road, and you will see the ruins of an old mansion.  This is what remains of Marshall Hall, the home of the Marshall family.  It was once a very lively location with tourists visiting the site, and it was once the site of a casino with the only slot machines outside of Nevada at the time.  Things changed when the Mount Vernon Ladies’ Association wanted the region across the river from Mount Vernon to be protected.  The National Park Service took over the site, making it part of Piscataway Park.  The mansion then burned down, leaving it in ruins.  Today, you can see the remains of the old mansion and get great water views of the Potomac River.

Go even farther south on Route 210 to Chapman State Park, which is home to Mount Aventine, another house that overlooks the Potomac River.  It is one of the few mansions on the river that has its original boundaries.  With its vistas of the river and Virginia, it became a signal point for the Union Army during the Civil War.  The house is open for tours every Sunday between April and September.  Admission is free, but they gladly accept donations.  Be advised that it is a mile walk from the parking area along gravel roads and may be difficult for those in wheelchairs.  You can learn more at friendsofchapmansp.org/index.php/mount-aventine.

About a twenty-minute drive from there is Smallwood State Park.  This park was originally the retreat home of William Smallwood, a general in the American Revolutionary War, who also was a state governor and a congressman who helped swear in the United States Constitution.  His retreat home is occasionally open for tours, and hiking is available in the park.  At the Sweden Point Discovery Center, you can learn about the animals in the park, and, if you enjoy art, you can visit the Mattawoman Creek Arts Center, open every Friday, Saturday and Sunday.  There is a $5.00 admission fee required to enter the park.  Although the park is owned by the state, the house tours and the arts center are operated by private organizations.  For more information, visit dnr.maryland.gov/publiclands/pages/southern/smallwood.aspx. 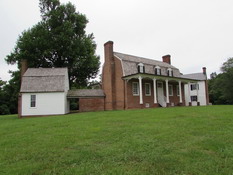 The next site to see is the Thomas Stone National Historic Site.  It is the home of Thomas Stone, a planter and a lawyer and a signer of the Declaration of Independence.  A visit to this site includes a small museum, family cemetery and a house tour, and there are miles of hiking trails throughout the park.  The park is operated by the National Park Service, is open Thursday to Sunday, and is closed in January and February.  Admission is free.  To learn more about Thomas Stone and about the park, visit nps.gov/thst/index.htm.

The historic town of Port Tobacco, Maryland is a ten-minute drive south.  You may not see much when you  pull into the parking lot – just a house and the old courthouse – but much happened here.  It was a very busy seaport with ships from around the globe.  The actual port was on the Port Tobacco River, which was filled in with river silt through the years, making the river unnavigable. 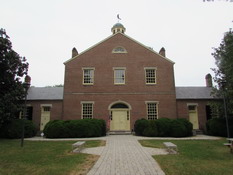 There’s more to Port Tobacco than the port; the history of this village is very deep.  Tours are given at Stagg Hall, the residence, the old courthouse, and the Burch House, another residence that also houses an archeology lab.  From April through December, tours are given Wednesday through Sunday from 10:00 a. m. to 4:00 p. m. Admission is free, but they gladly accept donations.  The village is operated by Charles County, Maryland.  You can learn more at charlescountymd.gov/locations/port-tobacco-courthouse.

The next time you are on the shore of the Potomac River looking over at Maryland, take some time to think about the great historic gems awaiting your visit.