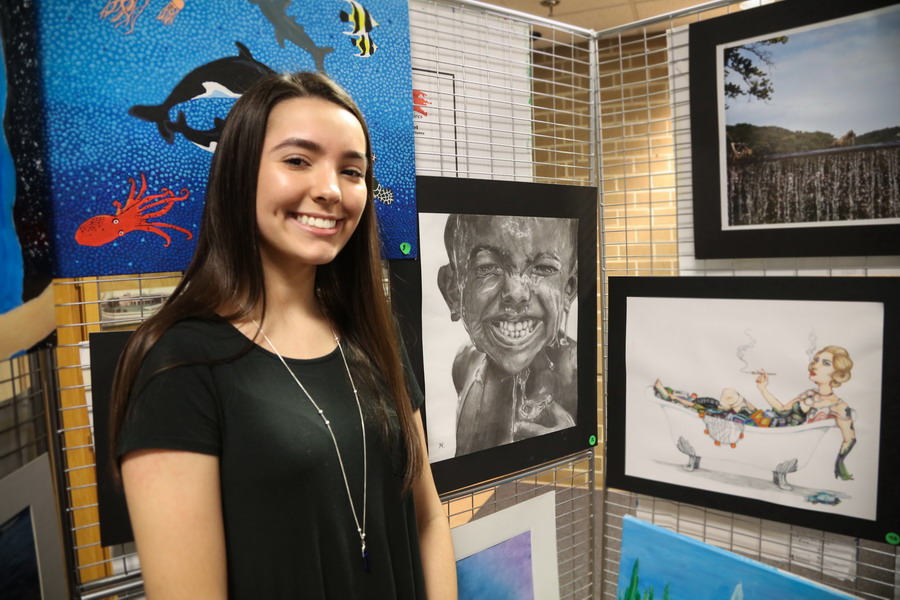 Grand Prize winner Kailee Leeser of Osbourn Park High School. Her image is the black and white chalk painting of a child.

Finishing it was another matter, though, laughed Osbourn Park Art Teacher Cynthia Gunnerson.

Despite completing her painting just two hours before the deadline, Leeser bested 178 other artists to earn Grand Prize honors and $800 in sponsorship prize money. Leeser was one of 27 students honored March 9 during the Service Authority’s annual high school art contest.

She stayed up the night before and was working on her painting until 4:00 p. m. the day it was due,” said Gunnerson. “As soon as she was done, I put it in my car and drove it over to the Service Authority. I guess some people just work best under pressure.”

Leeser beautifully articulated the event theme “Water is Precious and Essential to Life” in her black and white charcoal image of a smiling boy’s water-soaked face. To capture the happiness that clean water can bring, Leeser drew inspiration from seeing a boy from a Third World country on television.

“I always see kids in these countries on the news, and it makes me really sad to see their situation,” said Leeser.

“I thought she did a fabulous job,” Gunnerson said. “She is so hard-working and so inspired.”

This year’s winners were honored in three categories: Painting & Drawing, Digital Design and Photography. Nicholas Bartolotto, PACE East, won first place in Painting & Drawing while Samantha Gibbs of Forest Park and Battlefield’s Alyson Piccione were victorious in the Photography and Digital Design categories, respectively. PACE East art teacher Linda Ann Dickey said this year marked the first time in her 12 years at the alternative school that a student had entered the competition.

Battlefield and Patriot High Schools earned the most awards with eight apiece. Overall, the Service Authority awarded more than $6,000 in cash prizes to students thanks to the generosity of its 26 event sponsors.

“The Water Art Invitational is an amazing showcase of the artistic talent we have here in Prince William County,” said Karen Takacs, Service Authority Community Relations & Outreach Manager. “I want to thank the students, teachers, judges and sponsors for making this year’s event one to remember.”