Story and photos by Delia Engstrom 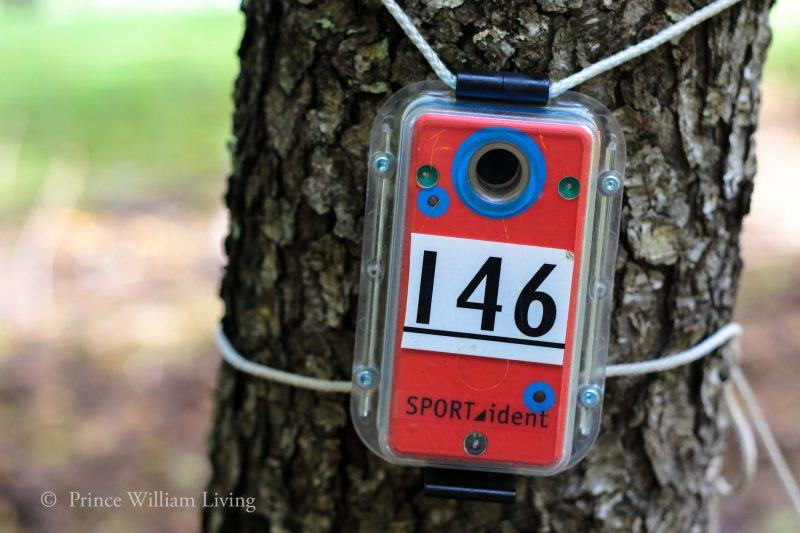 All courses have some commonalities for participants, such as this control site to be visited and e-punched with your tool to record your visit

Our daily commutes often find us stuck in traffic daydreaming about the weekend. We mentally map out ways to spend time with family and friends and squeeze in some stress-relieving exercise. We hope to enjoy some fresh air while exploring places we haven’t been before and put the reality of the work week in our rearview. Surprisingly, the easiest route to fulfilling all of those weekend plans is found by shelving our cell phones and giving up on our GPS. Destination: Orienteering!

An outdoor adventure sport, orienteering is family friendly and requires nothing more than a map, a compass and a desire to be outside for a few hours. Map-reading skills and powers of observation are used to navigate the best ways to find checkpoints as participants walk, run, hike and scramble along their chosen routes.

Although it sounds like the newest exercise craze to sweep the nation, orienteering has a nearly 50-year history here in Prince William County. It began in 1967 when the Marine Corps Physical Fitness Academy at Quantico introduced orienteering into their training curriculum, 80 years after orienteering first began as part of military training in Sweden.

A few years after the introduction of orienteering at the academy, the Quantico Orienteering Club (QOC) formed to include interested individuals from outside of the base. Eventually severing ties with Marine Corps Base Quantico, the club evolved into a community-based, 501(c)3 organization. Orienteering (known as “Land Nav”) is still part of the training of Marines and other branches of the military, while it also continues to grow as a popular sport across the country. The governing body for orienteering in the United States is Orienteering USA, now home to 55 clubs and more than 1,500 members across the country.

One of the largest clubs with 450 active members, QOC is comprised of individual, family and junior group members from Virginia, D.C. and Maryland. QOC holds orienteering events all over the region, but Prince William County, home to nearly 50 of its club members, has remained a favorite orienteering location through the years. Current QOC Vice-President John Baker said, “It has some of the best terrain for beginner, intermediate and advanced orienteers of all ages.” Events are held regularly, both day and night, at Prince William Forest Park and Manassas National Battlefield Park. In November 2017, QOC will host a national level two-day event celebrating the beginnings of civilian orienteering, back where it all started, at Marine Corps Base Quantico.

Regardless of ability and age, participants in orienteering will find their courses consist of a few commonalities. All will begin with a starting point, have a series of control sites (marked on the course by an orange and white control flag) to be visited in order using an e-punch tool to record your visit, and a finish line.

A colorful, detailed topographic map is provided to everyone and used to navigate to the control sites. Studying the different aspects of the map will help orienteers choose the best route between control sites. Magnetic north lines are marked to aid in compass use, and five-meter contour intervals of the land are marked in brown. Black signifies rock features, like cliffs and boulders, or man-made features, such as trails and fences. Blue depicts any water feature, including lakes, rivers and marshes. The colors yellow, white or green denote varying degrees of vegetation denseness that will be encountered. The starting point (a triangle), the control sites (circles) and finish (a double circle) are shown in magenta. Finally, distinguishing features of the control sites are shown through a variety of symbols. These maps aid orienteers in choosing their course, as the shortest distance between two points is rarely a straight line, especially if that line leads through a dense forest with low visibility.

To those unsure of their navigational skills in the woods, Baker encourages newcomers to the sport: “Our events always feature complimentary beginner instruction with an experienced orienteer in a one-on-one or small group setting going over what to expect on your first course and explaining how to read our unique and detailed maps.” 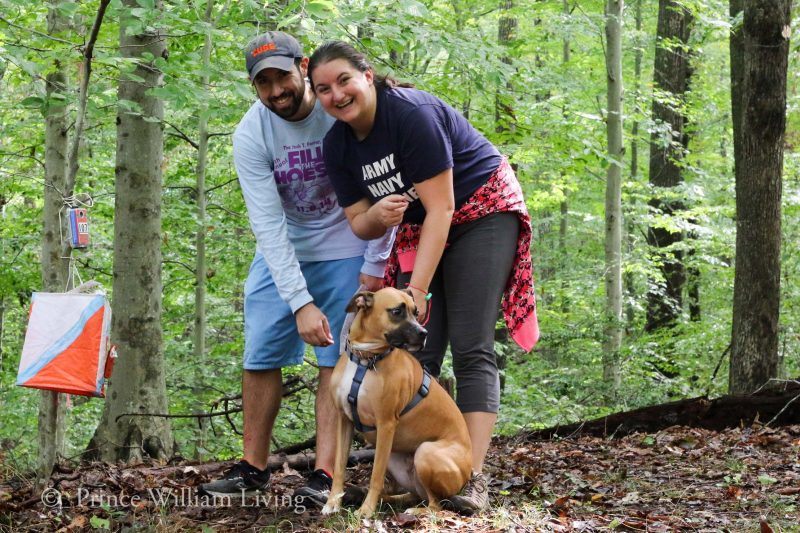 Alex and Jess Lord and their dog, Hiccup, attend a recent QOC event.

Beginners, junior orienteers or families can choose from shorter courses that stay on trails and require less navigational skill, while experienced orienteers can choose longer courses that are harder to navigate. During a recent QOC event, first-time orienteers Alex and Jess Lord chose the easiest course to complete with their dog, Hiccup. All three enjoyed partaking in a new activity, and after finding an elusive control point, Alex commented, “We’re enjoying being outdoors together, getting exercise and exploring a local park.”

With events taking place September through May, there’s plenty of opportunities for all levels of orienteers to improve their navigational skills and enjoy the local area. The road to a fun-filled weekend leads to orienteering, even if your GPS takes you to work on Monday morning.

Follow QOC at facebook.com/QuanticoOrienteering and find more information, including membership forms, at qoc.us.orienteering.org.

Delia Engstrom (dengstrom@princewilliamliving.com) is a writer, photographer and wife to a retired Marine. She enjoys exploring the parks in Prince William County with her family.