PG 4 stars out of five

I went off to see the Wizard 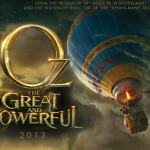 We have James Franco (127 Hours) as the Wiz,
Who doesn’t know what he is.
When he has to run from town
He gets on his balloon,
And then pretty soon
There’s no way he can come down.

What really made the movie
Was little Mila Kunis (Black Swan),
As she falls in love with him.
Though she looks great in leather,
That is not what Oz treasures
And so the wizardry begins.

You could while away two hours
On the other witches’ prowess:
Michelle Williams (Shutter Island) and Rachel Weisz (The Mummy).
One is good and one is bad
And they both find Oz a cad
And one gives really bad advice.

Then, the plot began to twitch;
There was an evil switch.
This threw Oz into a pitch
Because one had an itch
To become an evil witch.

Don’t look for Dorothy,
And the dancing from those three,
They have not come along.
But I liked it pretty well,
And as I’m sure you can tell.
I kind of missed the songs.

Now I did not see any elephants
All wrapped up in cellophant
But I still liked the show.
And if you were thinkin’
You would rather see “Lincoln”
You’d miss the Bruce Campbell (The Evil Dead) cameo.

There’s no way to compare them,
This and what I saw at age ten,
But they both have similar themes.
Don’t make that your concern;
There is plenty to be learned
In this prequel to a dream.

Don’t you worry, there are poppies,
Zach Braff (Garden State) plays a monkey
And there is a yellow brick road.
I’m giving it 4 stars
So just climb into your cars
And travel over the rainbow.

Tom Basham is an indie filmmaker.
Here is a link to his movie review site: http://bashmovies.wordpress.com/