A Hispanic family in Dale City tragically lost their lives the day after Christmas in 1997. Clothes left too close to the water heater in their basement ignited and caught the house on fire. It was then that the vice president of Comcast Cable approached Stephanie Williams about producing a TV show in Spanish to reach the Hispanic community.
Panorama Latino TV Show has been on the air since 2001. Over the years, it has received recognition from local governments, governors, U.S. Senators and the Virginia Senate, U.S. Census Bureau, the Virginia School Boards Association, among many others.

Hispanic Heritage Month runs from Sept. 15 to Oct. 15 and recognizes the contributions of the Hispanics in the United States and the many influences Hispanic heritage has on American culture, from food to music to sports and more. It’s the month set aside to honor Hispanics and their culture with parades, festivals and other activities.
Panorama Latino’s September show features a cultural segment that informs the public about various festivals in the local area, such as the Latino Festival in Manassas Park and the Community Fair sponsored by the Prince William County Police Department.
Over the years, elected officials and community leaders have appeared on the show to greet the Latino audience in honor of Hispanic Heritage Month.
“The whole point of the show is not just limited to one month,” Williams said. “It’s there to fill a gap and bridge the language barrier.”
The show is an activity of the 501(c)(3) nonprofit organization Hispanic Outreach and Cultural Diversity Education, Inc.

“Our mission is to provide outreach, education and information to save lives and to bridge the gap between the Hispanic community and the community at large,” said Williams.
She said the board of directors helps with that. The board of directors is comprised of prominent people in their community.
Since the pandemic, all interviews have been conducted virtually. Williams said, “This show has to do with fulfilling a need to people in our community who may not be able to get the important information they need.”
She added that this includes assimilation. “If you’re blocked off from information, you will never assimilate into the larger majority population.”
Topics on the show include health, education, suicide and depression, domestic violence and sexual assault, fire prevention, drowning prevention, community resources, to name a few. The show has had interviews with personnel from public libraries, parks and recreation, the Social Security Administration, the I.R.S. and the Library of Congress. Controversial issues are never included in the show, Williams said. “We don’t cover politics, religion or anything like that.”
During the pandemic, a public health nurse has been on the show repeatedly to inform the Hispanic community on how to navigate COVID-19. September’s show has information on Monkeypox. Special segments range from topics for young people to law enforcement. There are segments that highlight contributions made by Hispanics locally, regionally, nationally and worldwide.

The show has a brand new segment coming directly from San Miguel, El Salvador. It’s called Viva El Salvador, which translates to Long Live El Salvador.
“The goal is to broadcast directly from one of the countries most widely represented in the Northern Virginia area and most certainly in the Prince William area,” said Williams. She hopes to do this for other Spanish-speaking countries in the future.
“We also have an interview conducted by Juan Umanzor, President of the Salvadoran American Chamber of Commerce of Metropolitan Washington, D.C. Juan interviews Douglas García, the new President of the State Board of Community Colleges of Virginia,” Williams said.
Another new feature to promote Panorama Latino TV Show is a QR Code that people can scan with their phones to watch various episodes of the show.
Over the years, Williams has received the support of many leaders in the community. “I’m especially grateful to NOVEC for their long time support and to the Prince William County Police Department. More recently, the city of Manassas Park has also supported our efforts. Other community leaders such as Rebecca Barnes, publisher of Prince William Living, and Donna Flory, have been indispensable to our success.”
Williams is about to pass the torch as she plans on her retirement. She is seeking a qualified person who wants to give back to the Hispanic community and take the reins. She has been at the helm for more than 22 years. She is also seeking a Social Media manager. 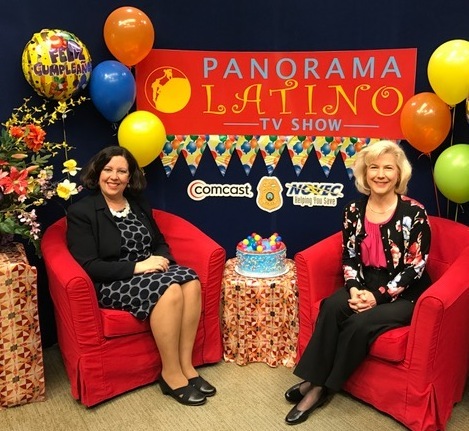 While there have always been sponsors for the show, more sponsors are needed. Williams said sponsors do not have to be Hispanic businesses or corporations. They welcome any corporation or nonprofit that wants to align themselves with a crucial show that focuses on the Hispanic community.
“They will get recognition on our show, and can also participate in interviews if the topic is educational,” Williams said. “We don’t have commercials and don’t sell products or service.”
Individuals can donate to the show as well and their donation is tax-deductible.
To inquire about sponsorship, be on the show or apply for either of the two positions available, email Stephanie Williams at panoramalatino3@aol.com.