Started in San Francisco in 1999, Thousand Oaks Barrel Company has gone from strength to strength since moving to the East Coast a little more than 10 years ago. Now, with its new Distillery Store on Main Street in Old Town Manassas, owner and CEO Bryan Weisberg expects the company to grow even more.

At the store, Weisberg showcases all things whiskey-related, from barrels to bootleg kits, home furnishings to humidors. Visitors should also keep an eye out for the summer opening of Weisberg’s National Spirits Museum, next door to the shop. 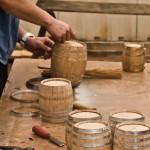 Craftsman putting the final touches on the assembly of barrels. Photo by Sean Floars

Worldly  Past  to  Local  Business  Owner Weisberg’s colorful history includes being the former bassist  for rock band Until December, co-owning a company that produced the ﬁrst interactive audio CD and being a partner in Five Star Entertainment, which created the award-winning “Art of Magic” game.

However, it was while Weisberg was at play, traveling around Europe on his motorbike in 1990, that he found the inspiration that would eventually lead to his barrel company. He and a friend “met a guy from India, living in the South of France, and he invited us back to his house where he tapped a small barrel of wine,” Weisberg said. “I thought this was a great lifestyle.”

Fast forward to 1998, when Weisberg received a small barrel as a gift from his father, leading to a “Eureka!” moment. “I knew this is what I was supposed to do,” said Weisberg, who set about learning the business.

Inside the Cooperage Business

When Weisberg started Thousand Oaks, it was the only company in the U.S. producing small, personal-size barrels. Today, it is one of only two companies in the nation producing barrels in this size, according to Weisberg.

Working out of the store and another Manassas-based location, 15 craftsmen produce all types of barrels and related products for Thousand Oaks. “The quality depends on the quality of wood used and the craftsmanship. We get our wood [American White Oak] from Missouri,” Weisberg said. The company produces about 50,000 barrels a year. Businesses and home enthusiasts use handmade barrels for making and aging wine, whiskey, bourbon and tequila. 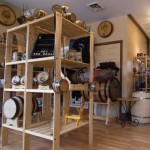 peek into the Distillery Store in Old Town Manassas. Photo by Sean Floars

Weisberg projects as much as 200 to 300 percent growth in online sales and 40 to 80 percent growth in his retail business this year. There is such a market for the smaller barrels his company crafts because “in larger barrels there is a higher surface-to-alcohol ratio,” he explained. The higher the surface ratio, the longer the aging process. It can take two to ﬁve years to age alcohol in a larger barrel, versus four months in a smaller one, he said.

“While the cost to produce is much higher when using the smaller barrels, it allows these small micro breweries to get up and running in a quicker time frame,” Weisberg said. This is especially important for businesses just starting out. Home distillers also rely on his barrels for aging whiskey in smaller quantities.

Other products for sale at the Distillery Store and on its website include shot glasses, bottles, signs, make-your-own kits and barrel furnishings, including tables, ice chests and serving sets.

Weisberg contracts with all of the major whiskey distributors, such as Captain Morgan, Jim Beam and Kentucky Bourbon Ale. Selling barrels and related products, the company also  participates in about 500 festivals a year, including the Manassas Wine & Jazz and Clifton Wine festivals. Thousand Oaks employs people throughout the country to man its booth at festivals. A craftsman in Virginia Beach makes the barrel furniture sold at the Distillery Store.

“Part of what we do here is … create jobs. If you are lucky enough to be in this position, then it is your responsibility to do this,” said Weisberg.

From Virtual to Reality

The Distillery Store opens a new chapter for Thousand Oaks, which has traditionally gotten barrels to market as a wholesaler, online and through festivals.

“It used to be ﬁrst you had a retail store, then developed an online presence. With us, it has gone the other way,” said Weisberg. “This is a new trend a lot of businesses we work with are moving into.” He explained that the addition of the Distillery Store allows customers to interact with the product and company in a diﬀerent way.

Soon, customers can also get a view into the history of whiskey and barrel making. When the National Whiskey Museum opens, it will feature a number of artifacts that Weisberg has collected over the last 15 years. Displays will include rare posters, vintage advertisements and a bottle signed by prohibition-era rum runner and NASCAR founder Bill France, Sr.

When the museum opens to the public in summer 2013 admission will be free, with donations encouraged. In honor of his nephew who has muscular dystrophy, Weisberg plans to donate any funds raised to the Muscular Dystrophy Association.

Weisberg said, “This is a way to help that cause. To watch young kids go through that is painful. You try to think of all the things you can do to help. If I have something here people are interested in, and can raise awareness, everybody is better for it.”

Whether you are drawn to the past, present or the future of this unique destination, plan a visit to the Distillery Store next time you are in Old Town Manassas. Learn more at www.distillerystore.com or by calling 703-885-1483.

A graduate of American University’s School of Communication, Olivia Overman has written articles for a number of online and print publications. She can be reached by email at ooverman@princewilliamliving.com.