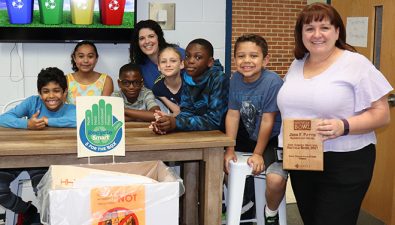 Fans of the morning television broadcast were visible through the window, signs held high. Cameras panned the crowd, then focused on the news anchors for a major announcement. Everyone, it seemed, had a stake in what was to come: Pattie Elementary School was to be recognized for being the state winner in the Keep America Beautiful Recycle-Bowl.

The location was Pattie’s own broadcast studio, but the excitement could equal that of network news. Cheers erupted in every classroom as Principal RJ Lucciotti announced the award, accepted accolades on behalf of the school, and introduced those who presented awards to the school.

Lynda Kummelt, acting executive director of Keep Prince William Beautiful, an affiliate of Keep America Beautiful, announced that an outdoor bench (made from recycled material) will be delivered and installed once renovations at the school are completed. On behalf of the PWCS Energy Management team, energy education coordinators Jeanne Jabara and Bryan Conrad presented a plaque (handmade by Battlefield High School students of recycled wood).

The Recycle-Bowl competition is held annually to engage students in “reducing, reusing, and recycling.” The sponsors of the Pattie Elementary campaign were STEAM teacher Patricia Motley and special education teacher Rebecca Kurylo.

Motley and Kurylo worked with students to create a recycling plan, trained staff and students on the collection process, tracked recycling for four weeks, and reported the data to Keep America Beautiful. The PWCS Energy Office provided the recycle bins for each of the school’s 36 classrooms. Jabara visited the school to review competition guidelines.

“Students liked being able to go into classrooms and collect from recycle boxes. They rose to the occasion, and liked having ownership and responsibility, and being role models,” said Motley.

“It was truly an amazing school effort,” said Kurylo. She estimated the amount collected approached 9,000 pounds. Four to five students at each grade level collected recycled items, including paper, plastic containers, cardboard, and aluminum cans, twice a week. Students who picked up the recycling bags were responsible for auditing the contents to ensure there were no liquids or non-recyclable items in the bags.

Lucciotti was visibly proud of his team’s accomplishment. “I’m really proud of the teachers who stepped up to get our students involved in helping the school,” he said. “And because they took the initiative, our students and our school benefited. This is just the start of many amazing achievements that we’re going to accomplish together as a school community!”

Word is that Pattie Elementary School students are in this for the long haul and intend to hold onto their state title next year. Any challengers among other PWC schools?