By Jason Shriner, The Aubergine Chef

Perfect pancake may be a bit of a loaded term but it piqued your curiosity – right? After all, who’s to decide what constitutes perfection? Let me just put it out there that a fan of my pancakes described them as “light as cotton candy” and that they were his mother’s favorite. His mom has good taste and I’m sure these will impress your mom this Mother’s Day as well.

There’s actually nothing significantly special about these pancakes’ ingredients. You probably have all of them in your house right now. They don’t even use buttermilk although you can easily substitute the whole milk for buttermilk if you want. They’re special because they aren’t prepared like normal pancakes – they’re made with a meringue. Pancakes are exactly what their name implies: A cake made in a pan. So if you want to alter the recipe you need to think in terms of altering a cake. Meringues are used in cakes to make them lighter, taller, and fluffier.

While most people think that a cake is leavened by baking powder the actual leavening is linked to the air cells incorporated into the batter during the mixing process before the cake is baked. Baking powder aids in creating air cells by releasing bubbles of gas, but to really get lots and lots of air cells you need to fold in a meringue. In the oven the water in your cake turns into steam and expands these air cells greatly giving your batter lots of volume resulting in a light and airy crumb.

The same is true of pancakes. If the only thing you change is how you prepare the eggs, then the pancakes with a meringue will be lighter and fluffier than those without the meringue. Making a meringue may seem a bit time consuming but an investment in a hand mixer or stand mixer eliminates this concern and encourages you to make pancakes more often. Which means your mom can enjoy your homemade pancakes even when it isn’t Mother’s Day.

Jason Shriner owns the baking & pastry blog The Aubergine Chef, which contains free tutorial videos and recipes. He also teaches baking classes at the Manassas Park Community Center. You can visit his blog at www.TheAubergineChef.com. 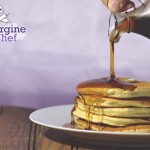 1. Wipe out your electric mixer’s bowl and whip attachment with a paper towel that is slightly dampened with vinegar.

3. Combine the remaining ingredients in the bowl and, using the paddle attachment, beat until thick and smooth.

4. Remove from mixer and gently fold in the egg white meringue using a rubber spatula in 2-3 additions.

5. On a greased griddle on medium-high heat, pour about ¼ cup of the batter and allow to cook for 1-2 minutes or until ready to flip. Then flip for an additional 1-2 minutes until done.

6. Serve immediately, or store refrigerated for up to 2 days. Frozen pancakes can be stored for up to 3 months.