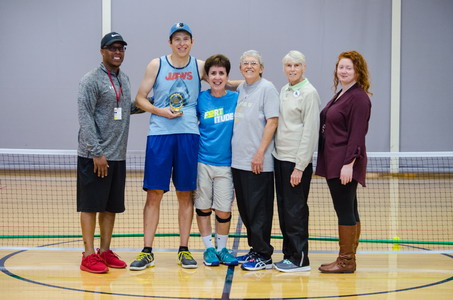 Pickleball was first introduced to the MPCC about three years ago, according to Bonnie Ballentine, a volunteer at the center who organized Saturday’s tournament.

When Ballentine joined the MPCC, she asked if pickleball was offered. She had learned about the game at another gym and was eager to continue playing. She spoke with Bethiah Shuemaker, MPCC’s Recreation Specialist for Seniors, and said she could have three friends join her for pickleball once a week if they could have court time. Shuemaker “was wonderful in helping us organize,” said Ballentine. “She helped get us the space and the equipment we needed.

“When we started, we asked for one net. ‘Shue’ got us two nets, saying we’d need two later.” The group now has three nets (so three games can be played at a time), and will likely need six before too long. 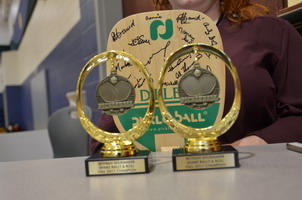 “Shue has been our biggest supporter, fan, and recruiter,” continued Ballentine. The tournament was named in her honor because of her overwhelming support. Shuemaker is a 20+ year employee of the Manassas Park Department of Parks and Recreation. A pickleball racquet, inscribed with the tournament name and signed by all the players, was presented to Shuemaker after the tournament.

Saturday’s tournament was a recreational, social tournament, according to Ballentine. The number of players was limited to 16, eight men and eight women. “There are no prizes, just bragging rights,” she said. The tournament players represented a range of experience, from those who have just been playing pickleball for a few months to people who’ve been playing for many years.

Ballentine said that anyone who’s played another racquet sport would have no trouble learning pickleball. Once a quarter, MPCC offers a class on the game. “While it’s difficult to become a top player, we can get you out on the court here,” said Ballentine.

The pickleball courts at MPCC are open Tuesdays, Thursdays, and Fridays starting at 8:00 a.m. Many days, games continue until 11:00 a.m. Many of the players are retirees, and prospective players of any age are welcome to join in the fun. MPCC is located at 99 Adams Street, Manassas Park.