“Ahoy, me mateys” come join the fun for a thrilling tale of pirates and buried treasure when the Center for the Arts’ Pied Piper Theatre 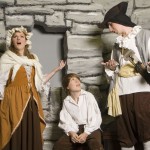 presents Treasure Island.  This rousing musical tale of the sea based on the adventure story by Robert Louis Stevenson follows young Jim Hawkins and Tom Morgan on a dangerous race for buried treasure against the pirate, Long John Silver.  With the map of Skeleton Island given to him by Billy Bones, Jim goes off to sea and discovers plans for a mutiny among the crew.  Once on the island, Jim is captured by the pirates but the marooned Ben Gunn and the disguised Meg, add mayhem to the plot. 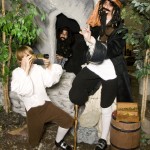 The roles of Jim Hawkins and Long John Silver are played by local actors Tommy Richman and Nick McFarlane of Woodbridge.  Dillen Longo of Dumfries plays Billy Bones, Ben Gunn and Tom Morgan are portrayed by Rebecca Parsons of Gainesville and Kyle Turnage of Bristow, and Sarah Jane Scott of Manassas plays Meg.  Forty talented young actors perform in this musical production with performances scheduled on Saturday, March 2 at 2pm and 7pm and on Sunday, March 3 at 4pm at Metz Middle School, 9950 Wellington Road, Manassas.  General tickets are $10 for children (12 and under) and $12 for adults and can be purchased online at www.center-for-the-arts.org.  Group tickets for organized groups such as scouts, churches, etc. are also available by calling 703-330-2787.