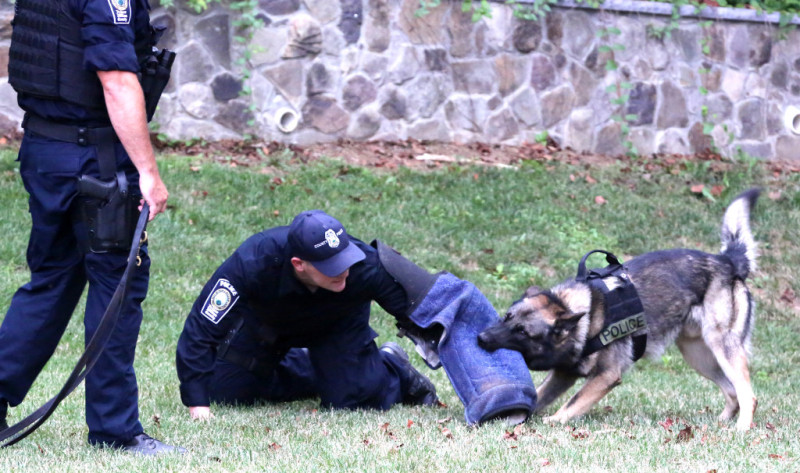 Police dogs chase and catch bad guys. It’s what they are trained to do – and they love it.

The dogs perform all of their tasks just for the chance to play with their favorite toy, and they like the work, said Prince William K-9 officer William F. VanAntwerp, Jr. “They play all the time. The way we train them, it’s all fun for them.”

VanAntwerp answered questions – mostly form children – for about 30 minutes before a police dog demonstration at the Potomac Community Library. VanAntwerp, with his K-9 partner Hawkeye, was joined by K-9 Officer Jeffery Scott Morris and his partner, K-9 Murphy. K-9 Officer Richard Bordenet brought his partner, K-9 Axxel to the event.

“These are working dogs and, yes, they do bite,” VanAntwerp told about 150 parents and children gathered on the library patio. “Law enforcement is very dangerous and we go after the most dangerous people when we use these dogs. We teach them to apprehend a suspect. If somebody’s taking off. They’re trained to jump up and bite and take that bad guy to the ground.”

VanAntwerp said that all of the police department’s eight police dogs came from Europe, and each dog gets 14 to 16 weeks of training in obedience and scent work to learn to track down and catch people who are suspected of committing felonies and violent misdemeanors.

Audience members got to see how the dogs obey commands and how they’re trained to bite and hang on to suspects, to take them to the ground and keep their handlers out of harm’s way. “We use them, first and foremost, to keep us safe and to keep the public safe,” Morris said of the police dogs.

VanAntwerp also told the children that the dogs get to go home with their handlers after a day’s work, and when they’re at home they act just like any other dog.

A police dog’s working life is eight to nine years, but some work longer. Police dogs get to live with their handlers as family pets after retirement, VanAntwerp said. “They get fat and happy at home with the handler.”

Eric Brennan, a Sudley Elementary School student, said he enjoyed the presentation. “I thought the dogs were fun to see and I thought what they do to hunt down criminals is pretty interesting.”

Officers from the police department’s K-9 unit will give a second demonstration at Chinn Park Regional Library, at 13065 Chinn Park Drive, at 7 p.m. Monday, July 28.