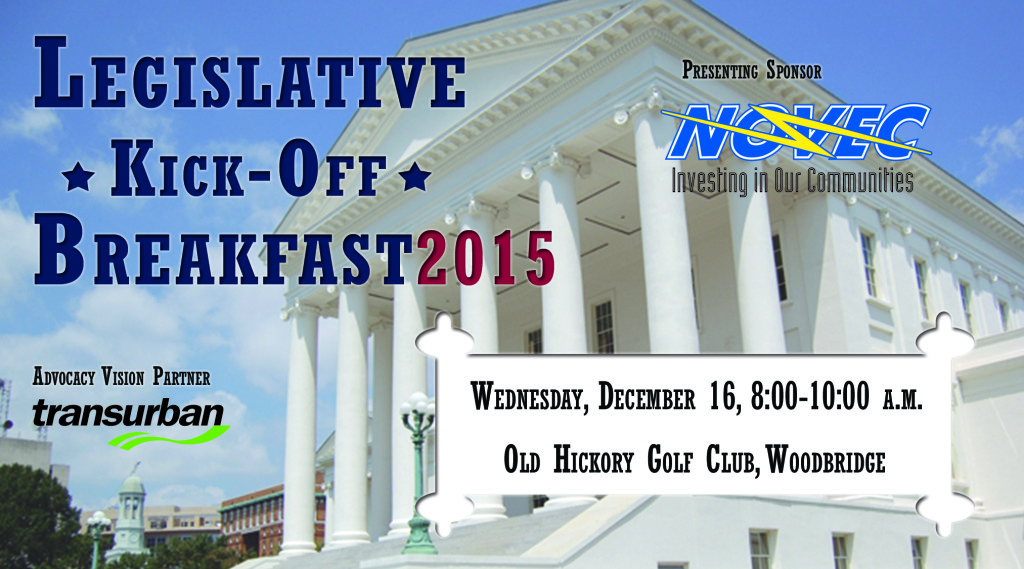 The Prince William Chamber of Commerce hosts the Prince William delegation to the Virginia General Assembly during its annual “Legislative Kick-Off” breakfast on Wednesday, December 16, 8:00 to 10:00 a.m. at Old Hickory Golf Club, 11921 Chanceford Drive near County Center.   The entire business community is invited to meet with elected officials before they head to Richmond for the 2016 legislative session.   PWL Attendance at this event is open to all businesses in the region.

“There is incredible economic opportunity in the Prince William region.  It is vitally important that the small business community remains engaged in the policy making process and aware of changes in Richmond that could potentially impact their industry.  Our region has one of the most influential delegations to the General Assembly and we are excited to share our 2016 legislative priorities with them,” said Brendon Shaw, Prince William Chamber of Commerce Director of Government Relations.

To date, Senator George Barker, Senator-Elect Scott Surovell, Delegate Scott Lingamfelter and Delegate Richard Anderson have confirmed plans to attend.  All members of the Prince William delegation to Virginia’s General Assembly have been invited.  Additionally, the Chamber will present the delegation with its 2016 Public Policy Agenda.  A copy will be made available at pwchamberadvocate.org following the event.

Cost is $30 for Chamber members, $45 for non-members and includes breakfast.  Pre-register online at pwchamber.org.  The Presenting Sponsor is Northern Virginia Electric Cooperative (NOVEC); the Framework Sponsor is Compton and Duling, LC, Attorneys at Law; and Transurban is the Chamber’s Advocacy Vision Partner, supporting the Chamber’s comprehensive efforts to foster economic opportunity and a high quality of life in our region.   To learn more about these efforts, or the Legislative Kick-off event, visit pwchamber.org or call 703.368.6600.