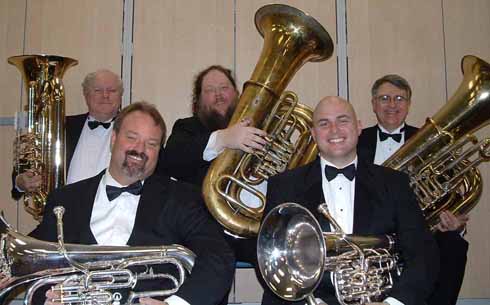 It’s a Monday night at Saunders Middle School in Manassas, and local musicians are slowly trickling into the band room for their weekly rehearsal with the Prince William Community Band, a nonprofit musical group dedicated to providing area musicians with an opportunity to perform concert band music, and local residents with a chance to enjoy it.

The room is filled with the din of conversation mingled with sounds of brass, woodwind and percussion instruments warming up. Ed Jones, the band’s conductor since its inception, steps onto the podium, and the room grows silent. His baton goes down and out comes the band’s first full, robust note.

History Spans Decades
It all started almost 20 years ago when one of his former students who was a manager at the Music & Arts Center in Woodbridge approached Jones, the band director at the time at Woodbridge Senior High School in Lake Ridge. She told him that she was trying to start a community band and asked if he would conduct it. He agreed, and they placed an ad in a local newspaper to look for area musicians.

“I came home one night to find my wife handing me my trumpet and a little newspaper clipping, and she said, ‘Go play!’” remembered Gary Shoemaker, a founding band member and past president of the group.

On June 28, 1996, the band held its first rehearsal at the A.J. Ferlazzo Building in Woodbridge. With about 30 members and a few months of practice, the band conducted its first concert on Aug. 11 that year at the Locust Shade Park amphitheater in Triangle. Jones remembered fondly one of the first songs the band played: “Rakes of Mallow” by Leroy Anderson.

Over the years, the band grew, no longer fitting on the Ferlazzo Building’s stage. Clarinetist and band Associate Conductor John Cznadel, band director at the time at Saunders Middle School in Manassas, suggested that the band rehearse there, which it has for 18 years, he said. With more than 70 members now, the group is about to outgrow the space at Saunders as well, Jones said.

The quality of the band’s music also has grown, and the group has established itself as a solid member of the Prince William arts community. In 2006, the band won the Kathleen Seefeldt Award for Outstanding Arts Group in Prince William County, according to information on the band’s website. In addition, Prince William Community Band has performed over the years with several renowned composers, musicians and musical groups.

“It’s a good band. I would say it’s one of the better community bands in this part of the country,” he said. He attributed that to Jones’ success in attracting talented players. “He’s been active in the county for a long time, and he knows everybody,” said Tilbury, referring to Jones’ decades-long history as a band director and music supervisor with Prince William County Public Schools. Players include area band directors and music teachers, along with retired U.S. Army Band members and also former students of Jones and Cznadel, he said.

“It’s been a cool thing for me to see that kids, after they’ve left me and gone on, … still play their instrument, even after they graduate,” said Cznadel.

The band is comprised of musicians of all skill levels and from all walks of life, and who all share a passion for music, Jones said. “The people in the band are just so enthusiastic about maintaining their ability to play, and they love band. Everybody is there because they love music. They love playing,” he said.

Four Ensembles Play in Small Venues
Prince William Community Band has developed a number of ensembles, which perform on their own as well as with the band. Dunbar Saxophone Quartet, which the band’s board member saxophonist Suzanne Marshall started, plays a variety of music and at a wide range of venues.

Prince William Brass is an ensemble of musicians on smaller brass instruments, including the trumpet, trombone and French horn.

The group plays at special ceremonies and commemoration events in smaller venues that the entire Prince William Community Band can’t fit into.

Formed in 2012, the newest ensemble, Moonlight Jazz Orchestra, is an 18-piece jazz big band that performs at various events. In April, the group played at the popular Blues Alley jazz club in Washington, D.C.

Serves the Community
The band performs eight to 10 concerts a year, all free to the public, said Tilbury. “I think for us, it’s more a matter of supporting the community,” he said. The band’s goal is to “be a family-friendly ensemble where you can bring the kids and have a good time,” Tilbury said.

Jones said that a typical year for the band includes performing at the Prince William Arts Council’s Arts Alive! festival, May 3 this year at the Hylton Performing Arts Center in Manassas, and the Prince William Community Band Concert, which will be May 17 at the Harris Pavilion in Old Town Manassas.

A couple of times a year, Prince William Community Band members also visit the retirement community Westminster at Lake Ridge, Jones said. Additionally, they sometimes perform at area elementary schools, where they talk to the kids afterward and let them hold and blow into the wind instruments, Shoemaker said.

“That’s what we’re here for,” he said. “We provide the county with a lot of options for arts in an era where arts are not being supported as much in schools as they have been in the past. I think it’s important that we get out there and talk about how art is very important to a child’s development.”

Amy Falkofske (afalkofske@princewilliamliving.com) is a freelance writer as well as the owner and photographer of Beautiful Moments by Amy Photography. She lives in Bristow with her husband and two sons.